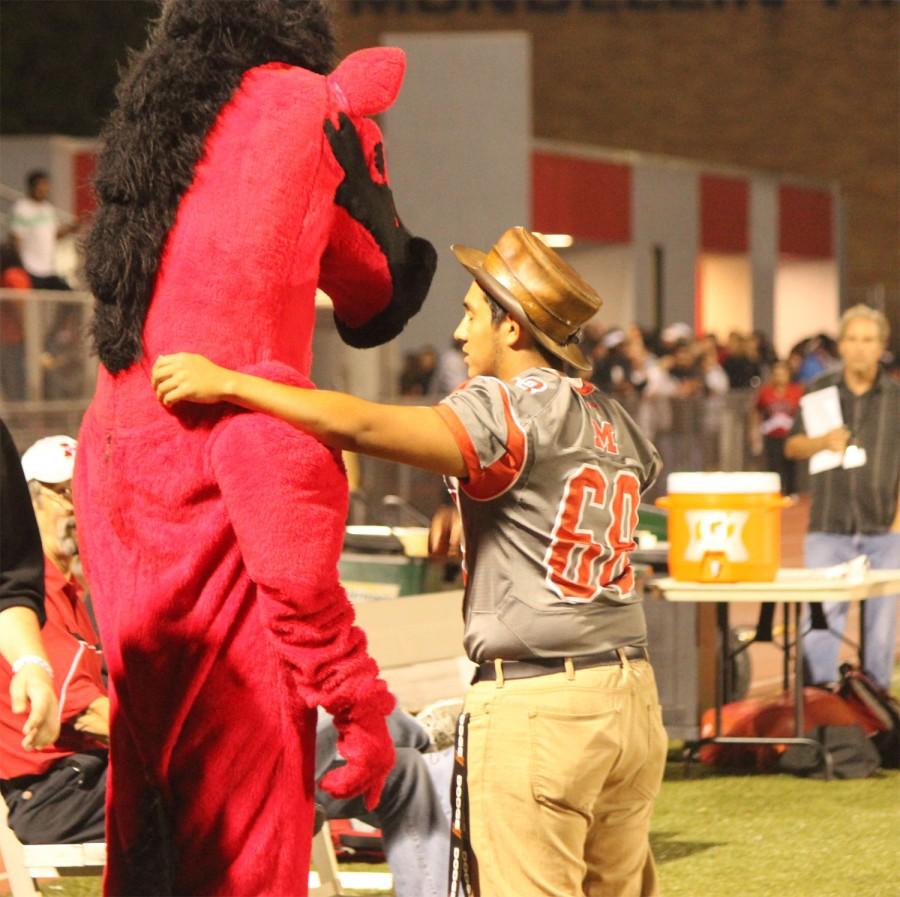 Team and school morale were high during the duration of the football season.

In the 2015 football season, the Mustangs were on pace to have a record-breaking season— and they did.

Starting the season off with three straight wins and having a 4-2 record through two-thirds of the season are both firsts for the team since the 2004 season where the Mustangs started 4-0 and made the playoffs that season as well.

“I feel truly blessed to be here and be a part of it. I’m excited to help contribute to building on the foundation and new tradition we started this season,” said new Head Coach Larry Calhoun. “Everyone was eager to embrace a new vision.”
With a great group of student-athletes, good coaches, hours of hard work and loads of talent, this Mustang team was in shape to break through.

“This team was built to be great,” said Sunil Hinglokwala, senior player.

The team’s new vision was evident in the first game when the Mustangs walloped Elgin-Larkin High School in its home opener with a 49-24 win. The team eclipsed 500 total yards of offense led by Quarterback Colten Fisher, senior. This dominating performance was a strong way to begin the season and the way Coach Calhoun wanted to start his first season with the team.

“We were ecstatic! The fans rushed the field, and from there on, our confidence skyrocketed,” said James Cox, senior player.
The Mustangs put in countless hours of hard work all summer and in the off season, so to them, this game was one to remember and, of course, to celebrate.

“It was a rush. Our hard work was finally paying off and getting the results we wanted. We created confidence going into the next game,” said Antoine Hicks, senior captain.

That confidence may have been the difference in the next game.

The following Friday, the football team took on Elgin High School in the Mustangs first road test of the year. This game with a stiffer competition had the Mustangs trailing at halftime, 24-21. With strong resilience, tough defense and determination from the players in the second half, the Mustangs clawed their way back and took home another victory, 35-24 over the Maroons.

“Believing in one another on the field and working as a team on both sides of the ball got the job done,” said Hicks.

Added Cox, “Going 2-0 and then 3-0 was the only thing we would talk about and focus on. We felt like it was our time to shine.”

The next week could have arguably been the most important game of the year for the Mustangs. It was Homecoming week, and the Homecoming game is a huge night for players and fans alike.

Cox described the scene: “The stands were jam-packed with fans rooting for us to go 3-0.”

That night, the Mustangs took on the Warhawks of North Chicago. With explosive play calling and a defense that didn’t give up a touchdown, barely allowing a first down, the Mustangs trounced the Warhawks 55-6 on the biggest night of the season and improved to a season record of 3-0.

“It was amazing. We haven’t won a Homecoming game in a while, and it just felt great,” said Hinglokwala.

This was the Mustangs’ first Homecoming win since 2008 when they beat Zion-Benton.

After a great start to a season and a huge Homecoming win, the Mustangs season took a turn as the Mustangs entered conference play where they would take on conference rivals, such as Libertyville, Stevenson, Warren and Lake Zurich.

The first conference game of the year was against Warren in Gurnee. The Mustangs opened the game strong, and at the end of the first half, only trailed by a touchdown, 21-14. This was only the second time the Mustangs have been behind this season.

After halftime, though, it was a different story from the Elgin game. Key mistakes in the Mustangs’ defense contributed to big plays that led to Warren touchdowns. Warren ran away with this game 61-21, dropping the Mustangs’ record to 3-1.

“We realized that we needed to raise our level of competition. Losing to Warren and Lake Forest made us want it so much more,” said Cox.

“We got ahead of the moment. For a while we needed to remember what we’re capable of, and we found that at Zion,” explained Hinglokwala.

The next game, against Zion-Benton on their Homecoming night, would prove to be a pivotal point in the Mustangs season.

“We were down [on ourselves] but quickly regained focus on our next game. We had to get back to trusting the coaches and trusting one another,” said Hicks.

With two explosive offenses clashing that week, everyone expected a shootout, but it was the opposite. The Zee-Bees scored 12 points compared to the Mustangs’ 14 in the first quarter. After that, neither defense conceded a point, until the Zee-Bees cracked the Mustangs’ defense right before the half, taking a 19-14 lead.

In the second half, neither defense gave up anything. They were relentless. The Mustangs sent blitz after blitz and got to the quarterback every time. The Mustangs defense was the toughest it had been all year. Time was ticking down, and the Zee-Bees had a 22-14 lead after they kicked a field goal off of a Mustang fumble in their own end.

But the Mustangs got the ball with less than two minutes in the fourth, and that is when Quarterback Fisher and the offense went to work. They drove the ball all the way down the field and put themselves in a scoring position with 40 seconds left. It took two tries, but the Mustangs plunged into the end zone and then went for two to tie the game 22-22. In overtime, the Mustangs stuffed the Zee-Bees and then scored in two plays. End of story, the Mustangs won a thriller 28-22.

“Everyone was screaming and shouting,” said Cox. We were the happiest I could remember.”

The feeling must have been incredible because players reported Calhoun singing along to Drake’s “Started from the Bottom” on the bus ride home.

Hinglokwala added, “That bus ride [home] was the best bus ride all year!”

After that game, the Mustangs’ record stood at 4-2. With one more win, the Mustangs would be playoff eligible, the first time since 2004.

The first chance at a playoff berth came with a home conference game against the Bears of Lake Zurich. This seemed like a favorable matchup for the Mustangs as the Bears were struggling this season with a record of 2-4, but any conference game is a challenge.

On the Mustangs’ first drive of the game, they marched the ball down the field and scored. The key play in the drive was a long break away run from Senior Running Back Isac Banuelos. The game started 6-0, Mustangs.
On the Bears next drive, the Mustangs intercepted a pass and were set up with an excellent field position. They drove it down to the goal line but were stopped and had to take a field goal; Mustangs led 9-0. After that goal line stand, the Bears took the momentum and the game. They scored on multiple possessions, and Lake Zurich won 41-9.

The next week, the Mustangs had a second opportunity at making it into the playoffs. They would be taking on conference foe and bitter rival Libertyville at home.

To open the game, the Mustangs took possession of the ball. They ran the ball on consecutive plays and were moving, but the Wildcats’ defense looked strong and came out on top. The Mustangs couldn’t get much past the stout defense from Libertyville, and that turned into offense for them. The Wildcat offense dominated, and Libertyville took this conference game from Mundelein, 34-7.

In the ninth and final week of the regular season, the biggest game of the year was approaching. With their last chance at making the playoffs, the Mustangs had to take on rival Stevenson. But before the game was played out, there was a lot of behind-the-scenes work for the Mustangs.

A teacher at MHS has a son, Noah Baker, who was diagnosed with Neuroblastoma, a form of cancer. In honor of Noah, Mundelein and Stevenson claimed this game to be “The Noah Baker Game,” as both teams raised money for the cause.

This game was the Mustangs’ last chance at a playoff berth. With the Mustangs at 4-4 and Stevenson at 5-3, this was a favorable match-up and a much-anticipated game for Mundelein, as it was predicted to be a ‘dogfight’, and it was.

These rivals went after each other, and chippy play led to more than 30 penalties being called, mostly unnecessary roughness and unsportsmanlike conduct. The Mustangs could move the ball up and down on the Patriots, but turnovers cost them valuable opportunities. Likewise, Stevenson had an explosive run game that stole the show; their running back had six touchdowns alone. The Patriots took another one from the Mustangs by a score of 55-21.

“It was tough, really tough. Coming so close and falling short,” Hicks said. “Also, it was good because we built a foundation for teams after us to continue building on and becoming more successful.

Calhoun added, “I expected us to be a playoff team, but we fell short of that, but I will not give up on expecting great things.”

Despite three tough losses at home to end the season, the Mustangs had a season that they won’t forget. This was one season to keep in the memory books.

“Starting undefeated was a crazy feeling, and the overtime win against Zion was something we’ll all remember for the rest of our lives,” said Cox.

This season the team averaged more than 28 points per game, three times as much as last year, and totaled more than 3,000 yards of offense. The team this year won more games in one season than they had won in the past five seasons.

“I couldn’t ask for a better team, and we’re all one brotherhood. The bonds we made will still be there after football is over,” Cox said.

Additionally, this team was given recognition from the other teams in the conference, and five players received exclusive awards. See accompanying chart.

Heading into next season, the new coaching staff and the players gained valuable experience that will help them continue to turn the program around and have a repeat of last season, hopefully with a better outcome.

“We’ve started to create a culture of high expectations and servant leadership and laid a foundation that I believe will grow into a championship-caliber program,” said Calhoun. “This year’s team will be the one that started it all.”

Along with a good season, the Mustangs were able to break team records and be honored with awards. This year, five players were awarded the title of All-Conference. A player is declared all-conference by all of the coaches of the North Suburban Conference. Coaches from Stevenson, Lake Zurich, Lake Forest and others decide on who receives this end-of-the-year award.