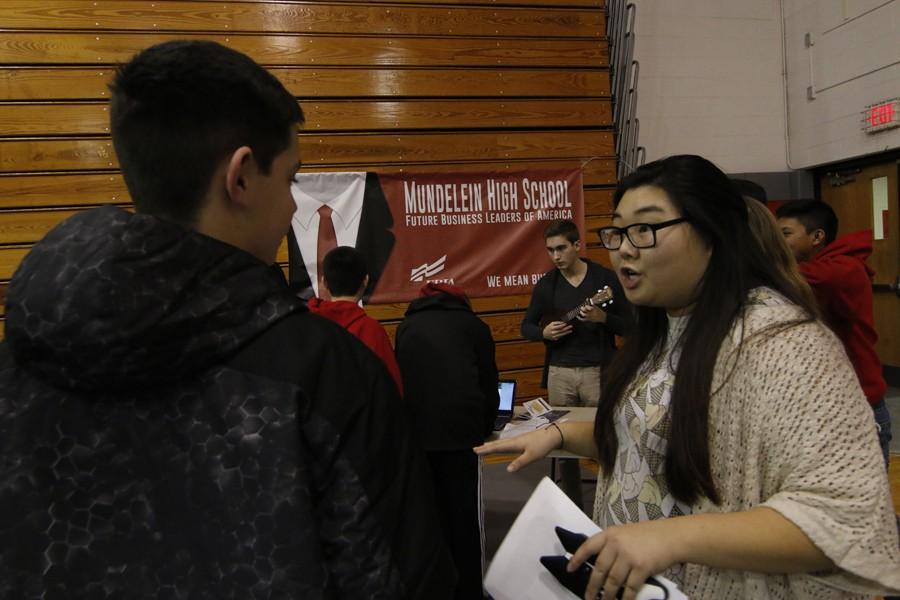 Christine So, sophomore, introuduces an incoming freshman student to Future Business Leaders of America. FBLA was one of the many clubs in attendance at Curriculum Night.

For most people, beginning high school is one of the most exciting yet daunting times they can experience. To help ease this transition, MHS offers Curriculum Night: an event to inform incoming freshmen and their families about course selection and to emphasize the importance of getting involved in the multitude of extracurriculars at MHS.

“The core purpose of [Curriculum Night] is to help students and families understand the course selection process, and the bigger goal is to introduce them to the MHS environment,” said Director of Curriculum Stacey Gorman.

The night started off with a presentation in the auditorium that explained the different courses available to freshmen and the logistics of course selection. Incoming freshmen and their families were then ushered into the main gym where booths were set up by MHS clubs and sports.

Gorman explained that the purpose of this part of Curriculum Night is “to connect students to club sponsors and coaches. There’s a lot of research that shows a correlation between school involvement and GPA, so we want to encourage students to get involved in as many things as possible.”

According to Assistant Principal Jesus Tirado’s records from last school year, 45 percent of MHS students were involved in at least one club and 43 percent in at least one sport. Getting involved in extracurriculars also helps teach important life skills that carry on after high school.

“Being involved in clubs and activities definitely helps with time management. Students who are involved in extracurricular activities have to balance those commitments . . . with their schoolwork,” said Gorman.

Christine So, sophomore, was a student representative for FBLA at Curriculum Night and said “getting involved is one of those things that gives you a lot of other opportunities, and it really opens your doors.”

But getting incoming freshmen to approach a booth at Curriculum Night can be an awkward exchange at first.

“I’ve talked to many incoming freshmen, and obviously they all seem overwhelmed being that it’s high school. They’re all pretty nervous,” said So.

To help break the ice, So continued, “I like to go up to them and say ‘hey, you look like a future business leader of America.’ You have to go to them because they’re going to be scared to approach you.”

“Instead of being formal and whatnot, I try to be goofy. I like to introduce myself with a smile and give off the vibe that we’re on the same level,” said Palomo.

Palomo also reflected back on the impact Curriculum Night had on him when he was an incoming freshman.

“It was overwhelming because there was a lot of information being given to me at once,” he said. “But going into freshman year, I took time and eventually found interest in clubs like Mock Trial.”

Curriculum Night is a big event to plan, and it requires the cooperation of students and staff members to make sure all of the components are in place.

“A lot of [planning] goes into our image,” said Gorman. “Do things look nice? Do we have a welcoming environment? Especially in science, we have these new microscopes that only twelve high schools in the country have; that’s something we really needed to showcase.”

This nanotechnology microscope also helped to promote the opening of the STEM wing next year along with the new courses that will be offered, such as “Mobile Apps and Coding” and “Introduction to Engineering.”

Regarding the booths for clubs and activities, Gorman worked with Perry Wilhelm and Jesus Tirado. “This year, we had a map for parents and all the booths were numbered; Mr. [Ethan] Karolczak also helped out to organize that. On the student component, I worked with Mr. [Randy] Lerner, Ms. [Cynthia] Henrichs, and Link Crew on making sure the night was exciting for students,” said Gorman.

Performing arts directors were also involved in the process with a performance from Sound and the addition of quartets playing music throughout the building.

As the importance of Curriculum Night has increased in recent years, many parents of incoming freshmen seem very satisfied with what MHS offers.

Gorman reflected on the overall success of the night and said, “With the decorations and the student component, I felt that there was a lot of energy and excitement for MHS. Some families of multiple MHS students, who had been to Curriculum Night previously, told our superintendent Dr. [Kevin] Myers that it was by far the best incoming freshman orientation they had experienced.”