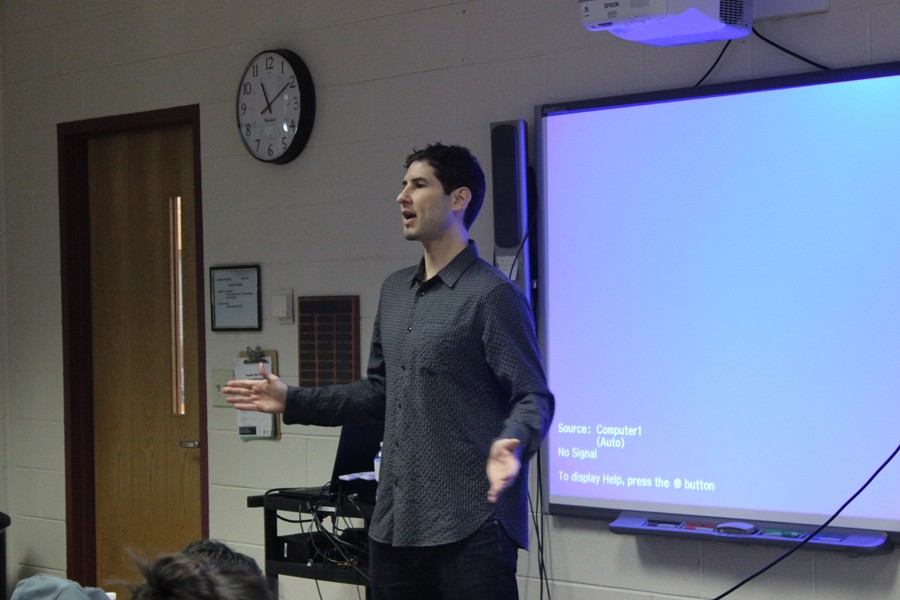 And he is one of them.

Stealing the audience’s attention and keeping them fascinated with interesting personal facts and flowing jokes, award-winning author De la Peña engaged students and teachers during his Feb. 23 visit to MHS—its second-annual author’s visit.
Beginning his afternoon presentation, he revealed that writers are prone to steal anything and everything from everyday life and incorporate such elements into their stories, thus making them the ultimate thieves. While they aren’t after one’s jewelry and valuables, they are in wait of inspiration. A conversation between a father and son on a train, one individual’s act of kindness, or even someone’s name– all could be slyly stolen and put into a writer’s latest bestseller.

De la Peña began his morning at MHS by meeting with students from creative writing classes. There, he guided them through writing prompts that encouraged skills, such as description, dialogue and summary.

In one exercise, he asked students to list five traits or characteristics of themselves or of their own novel character. Later, students used these responses to write a short excerpt in which they or their character exhibited the listed characteristics to talk a woman off of a ledge.

When he isn’t traveling the nation to visit high schools, De la Peña teaches his own creative writing class in New York.

“I focus on the importance of hard work,” he said in an e-mail. “I tell [my students that] revision is the most important part of the equation, and we talk about revision strategies. I’m also able to comfort them — none of us think our work is good enough, even published writers.”

During the third or fourth period at MHS, students from various English classes attended his auditorium presentation where he focused more on his story of growing up as a “reluctant reader” and finally–late into college–developing an interest in reading and, later, writing.
“Matt has inspired me to read more books and to never feel guilty for maybe one day being the first in my family to attend college,” said Freshman Jarely Sanchez.

From sharing stories about his awful poetry in high school to admitting his challenges growing up as half Caucasian and half Hispanic, De la Peña connected with students on many different levels.
“He inspired me to not be afraid and try different things,” said Freshman Sebastian Moyao.
Despite his late journey into the literary world, De la Peña has accomplished much success as an author. His picture book “Last Stop on Market Street” won the 2016 Newbery Medal among other honors.

“He is a true inspiration to teens everywhere,” said Freshman Gina Tellez. “I feel honored to have seen and…[been] near him.”

At the end of his presentation, students formed a line in hopes of an autograph and a photo with the author who was more than just another young adult genre writer.

For many in the audience, De la Peña broke through the tough teenage shell, which most high school students wear, in order to bring out their desire to succeed.

De la Peña has also attempted to do this in his six young adult novels, including “Ball Don’t Lie” and “Mexican WhiteBoy.”

Of what he enjoyed most about MHS, De la Peña said, “I really loved interacting with the students. I went to a very similar high school, [and] in a way, it felt like home.”