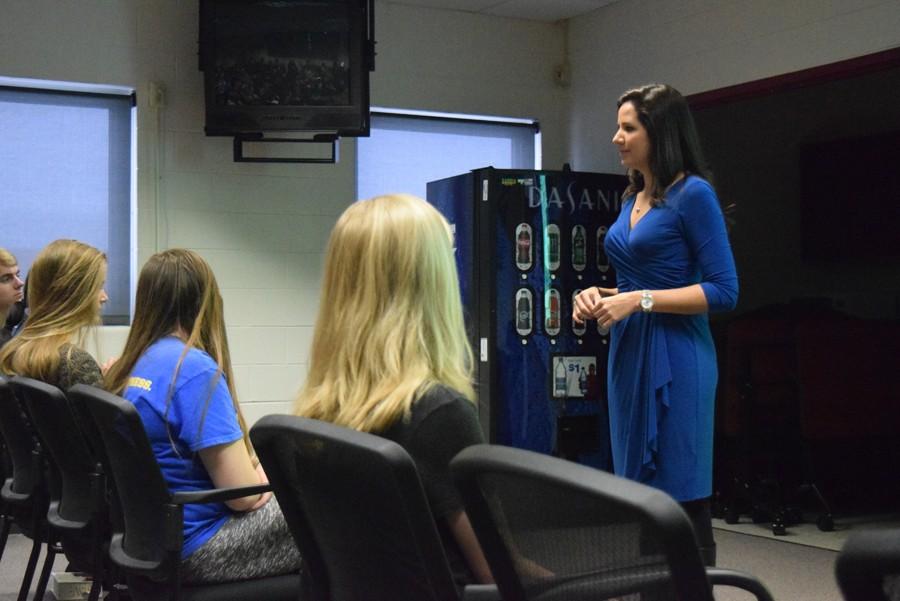 MHS broadcasting and journalism students welcomed a special guest on March 1: CBS 2 reporter and Buffalo Grove High School alumna Sandra Torres. Torres, who was a former student of broadcasting instructor Kent Meister, answered students’ questions and shared some of her favorite stories that she’s worked on with CBS 2.

“It’s so surreal to be back after 15 years,” reflected Torres on being reunited with her teacher.

For Torres, the road to a career in broadcast journalism was a long one. After moving to the United States from Columbia at the age of 13, she enrolled in Meister’s broadcasting class when she started high school.

“She was a very hard worker. She didn’t always get it the first time, but she was always willing to improve herself,” said Meister, who taught at Buffalo Grove High School from 1994 to 2002.

“In college, I really fell in love with being a reporter and telling stories,” Torres said. “One of my dreams was to work at NBC 5 [in Chicago] since we took a field trip there in high school.”

Once she graduated from college, Torres worked her way up from internships to achieve her dream as a news content producer for NBC Chicago and, later, a multimedia journalist for CBS 58 in Milwaukee. Both of these jobs require a journalist who can do it all: reporting, writing, editing, videography and photography. However, Torres was prepared for these versatile roles, much due to her experiences in Meister’s class.

“If I didn’t take that class, I wouldn’t have taken this path. I had the most fun editing and learning how to put stories together,” said Torres.

Meister emphasized that storytelling skills are explored in-depth in his classes today, and he wanted his current students to gain a greater sense of good storytelling from Torres’ visit.

“Sandra doesn’t just give the facts up front. . . . She gets you emotionally-involved,” he said. “I wanted my students to see how it’s done and how it’s not much different from what we do in class.”

Torres is now a reporter for CBS 2 ‒ a career that comes with long hours and little time off, but both of which she is willing to do in order to pursue her passion for reporting.

“As a news reporter for the network, I feel like I’m on call at all times. I work holidays, weekends and crazy hours,” Torres continued, “but I love it. Everyone thinks that it’s so luxurious, but it’s really hard work.”

Senior Joel Salazar attended Torres’ visit and is enrolled in Meister’s Student Internship course. As a student interested in a career in broadcast journalism, Salazar gained a lot of insight from Torres.

“Broadcast journalism has been an interest of mine for a while. It was cool to get an inside look at what it’s like and the amount of work she had to put in to get to where she is,” said Salazar.

Torres’ position as a reporter at CBS 2 allows her to explore the stories that she enjoys telling. She shared a report from this February on a firefighter with ALS who was raising money on a GoFundMe page.

“I’m drawn to stories that make a difference in someone’s life. Just last week, I came across this firefighter, and since we’ve aired the story, he’s been able to raise about $15,000,” Torres said.

It’s this love of storytelling that originally drew Torres to the world of journalism, and it continues to drive her to work hard despite her arduous schedule. While it can be easy for some to get lost in the glamor of being on TV every night, Torres’ intentions have always remained the same.