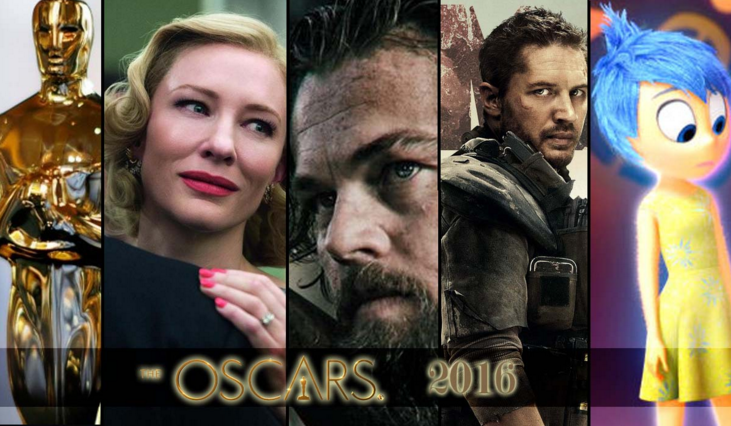 That’s basically the only thing you want to hear, right?

Well, I can tell you right now that DiCaprio’s award means just as much as the other nominees and winners who were recognized by the Academy. And I don’t just mean the Best Actor category.

I mean the whole Shish Kebab.

Best Director, Picture and the supporting roles are also full of undeniable talent. And all of these are presented underneath the host of the night: Chris Rock.

I guessed that the controversy surrounding the Oscars (being that there were no black actors on the nominee list) would kick off the award night. And I should win the award for best predictability because my theory did turn out to be correct. Rock used the controversy in joke format, spoofing “The Martian” and others. Well, this to me just made myself wish there was some way to step into H.G. Wells time machine and travel past the tiring debate.

But let’s kick this ball out of the soccer field and proceed, shall we?

I prefer to see who won under the ‘spotlight’ of Best Picture.

If you didn’t get the hint, “Spotlight” took home this prestigious award with another gold man for Best Original Screenplay. Kudos to you, Director Tom McCarthy, actors Michael Keaton, Mark Ruffalo and Rachel McAdams, because you earned this shining achievement. McCarthy’s film is about the true story of a Boston Globe investigative team, who uncovers a cover-up of sexual abuse within the Roman Catholic Church. I preferred “Mad Max: Fury Road” for the award because it was an action masterpiece (and my favorite film of 2015), but “Spotlight” was the favorite for many.
And now to DiCaprio, who won big for his role in “The Revenant.” DiCaprio did give off a remarkable portrayal of his character Hugh Glass in this survival drama flick, but I believed that Michael Fassbender should have been the night’s big winner.

Back when I compiled my list of predictions for the Oscars, I looked closely at both of our great American heroes. “The Revenant” had DiCaprio aching in pain through a majority of the thing, (thanks “Brother Bear” for mutilating our boat savoir: Jack!) and “Steve Jobs” had a phenomenal performance with Fassbender delivering his finest. It was hard to narrow it down to these two and even more difficult to determine a winner, but I favored Fassbender in the end.

Then we had Brie Larson win for being in a room, with a cave boy, for no reason. That’s not the whole plot to this next film I’ll have you know, but Larson did accomplish her task for the movie “Room”– a drama that features her as a mother, who tries to show her son the outside world after they escape the clutches of a captive.

My vote for this category went to Saoirse Ronan for “Brooklyn,” and I ended up believing it would go to either one of them (even though the whole crowd cheered for Ronan more than the other nominees).

But the main highlight to me was the Best Supporting Actor Award. Sylvester Stallone was the favorite to win until an unknown hurricane swooped in and grabbed the award passionately.

That hurricane is named Mark Rylance.

Rylance’s performance in Steven Spielberg’s “Bridge of Spies” was extraordinary in every way because his character of a Russian spy during the Cold War was likeable, charming and extremely comforting.

Everyone wanted Stallone to win the match, but Rylance took it for the “Bridge of Spies.”

Wow, would you look at that, a post-apocalyptic wasteland showers the whole frame…and look!

I wish the Academy could’ve given out two awards for these settings: one to George Miller for “Mad Max: Fury Road” and the other to Alejandro Gonzalez Inarritu for “The Revenant” because these two films will literally have your jaw drop with these wonderful and gorgeous looking sceneries. Sadly though, only one can take home the prize.

Miller, you rocked history with your flaming guitar and chrome spray paint, but Inarritu wins again this year (previously for “Birdman”) with his snow and, yeah, mud. “The Revenant” is a hardcore survival film shot with some pretty astonishing moments that can be a gut-wrenching time at the movies.

But all of these awards mean a lot to the people who created sensational motion pictures. And this 88th Academy Award show was a landmark achievement in cinema. However, it continued to re-hash the events of the Oscar controversy time and time again. But it was a lot better than that Neil Patrick Harris fiasco that transcribed last year, and this year had a pretty hilarious sound mixing/editing entrance. There was this background on stage that featured yellow lines and then all of a sudden, they started to squiggle and loud music erupted around the theater. The camera showed the reactions of the celebrities, and the funniest went to Mark Ruffalo, who looked very paranoid. So congratulations, Mr. Hulk, you’ve won the night’s big award.