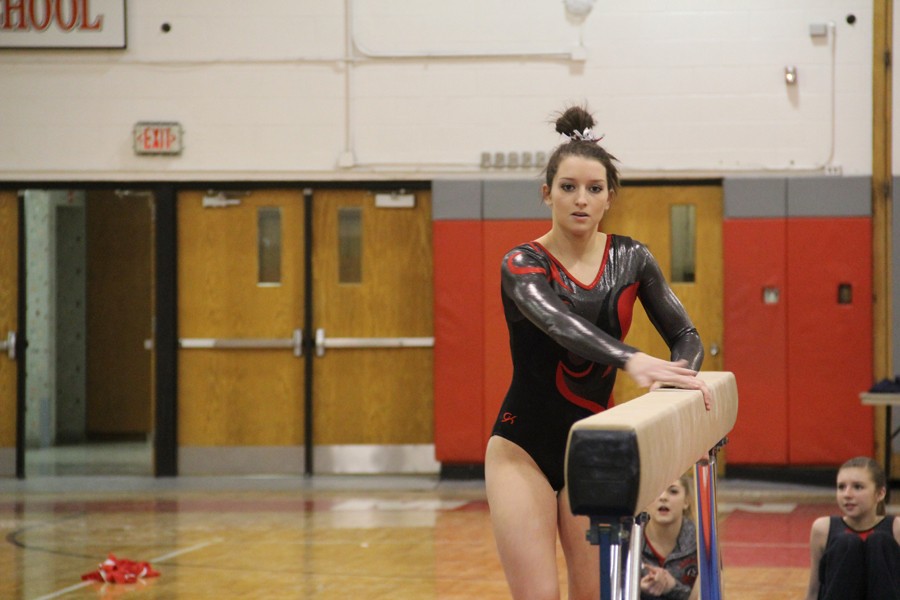 Junior Taylor Shanahan practices on beam. She competed in all-around and bar at the State meet.

As they entered the 2015-2016 season, the girls gymnastics team knew the stakes were high; they had won conference and regionals in their two previous seasons and were hoping for the same success this year. On top of conference and regionals, the team also set an ultimate goal of qualifying for state.
“Our varsity team had the same goal coming into the season, which was to make state as a team. We came into this season with this attitude of sticking together as a team and prepared with our goals in mind at all times,” said Varsity Coach Jamie Brongiel.

The team competed strongly at conference and regionals, winning both meets for the third year in a row and achieving their highest team score of 144.

Varsity gymnast and team captain Taylor Kozaritz reflected on this success and said, “We were undefeated, conference and regional champs for three consecutive years, and we made it to sectionals.  In the past we didn’t ever think we could make it as far as we did, but this year we knew we had a chance at making it to state.”

A team score of 144 made Coach Brongiel especially proud, as it reflected not only individual achievement but hard work on the part of every team member.

“All of the girls treated each other like family and were very supportive of one another. This support is why we, as a team, hit our highest score this year of 144,” said Brongiel.

After their success at conference and regionals, the team faced a challenge at sectionals. Their performance at sectionals prevented them from making it to state as a team, but two gymnasts, Junior Taylor Shanahan and Senior Megan Kehr, both qualified for state individually.

“My experience at state was unbelievable. It was nothing like I have ever experienced before, and I was excited to be among the top gymnasts in the state,” said Shanahan, who competed in the all-around and bar at state.

Shanahan’s accomplishment of making it to state is due in part to a great deal of encouragement from her entire team. By practicing six days a week, she also believes that making state was a result of putting in hard work all throughout the gymnastics season.

She added, “The positive energy and encouragement from everyone in the gym and continuous hard work, day in and day out, was essential to our success as conference and regional champions.”

While Shanahan is a junior and will continue gymnastics next year, many of her teammates will be graduating. For Coach Brongiel, seeing the senior gymnasts leave MHS will be bittersweet.

“Being in the gym with them as much as we are, they become family to me, and so ultimately I will be sad to see them leave MHS,” said Brongiel.

Captain Kozaritz expressed that she is going to miss her teammates as she finishes her senior year. She is optimistic about the future of MHS gymnastics and leaves younger gymnasts with the following advice:

“I would tell younger gymnasts to not be afraid of trying new skills because you never really know what you could achieve, and to trust yourself.”