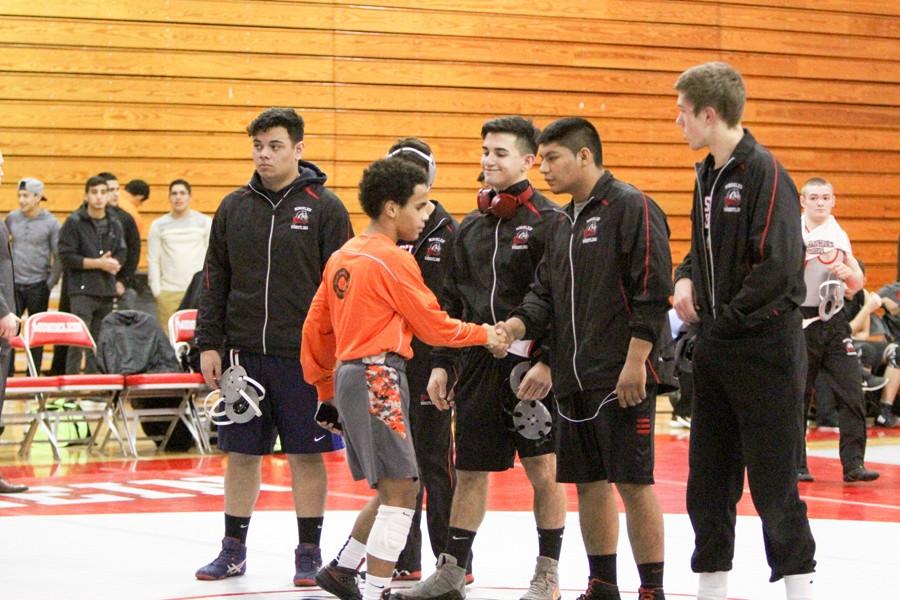 They aren’t the most talked about sports team, as not many students hear about their recent competition or the key players on the team.

However, they are a part of the Mustang family, and the boys wrestling team has demonstrated school spirit in their recent season both on and off the mats.

Senior George Kostantinidis, for example, worked beyond expectations to improve his performance throughout the season.

The team ended the season with a total of 11 wins and 10 losses. Key matches were against Stevenson, Libertyville and Niles-Notre Dame.

Mark Stewart, new head coach, came from Grayslake Central High School where he coached for eight years.  Stewart has worked to build on effective practices already in place.
“Every time you change coaches, you’re going to have differences…nobody does anything the same,” said Stewart. “I try to incorporate a lot of what was already done,…[and] at the same time, I try to add my own way of doing things to it.”

While the team has adapted to the leadership change, one obstacle remains—student participation.

“I think the kids that are committed work really, really hard….We need more kids committed to the cause. That’s our weakness,” said Stewart.

Kostantinidis saw the same issue, saying that the team has “had some issues with people not showing up to practice.”

Despite this challenge, the season ended with one student competing at state during the month of February.

Senior Alec Riportella first placed sixth at finals, which eventually led to him being the only state qualifier on the team this season.

However, he wasn’t alone at the competition.

“Two of the guys came down with us the first day, and about ten other guys came down the other day just to watch me wrestle,” said Riportella. “We all care about each other and want to encourage each other.”

The state competition took place at Assembly Hall in Champaign, IL. Riportella described the experience as one of his most enjoyable moments of the season.

“When you get out on the mat…you don’t really think about [the nervousness] too much. It’s all just natural,” he said about his feelings during the competition.

Senior Jennifer Rojo was one of the team’s wrestling managers. She assisted the team last year, too, and has seen significant changes in some of the players. While they have improved both individually and as a team, they have also grown in their team spirit.