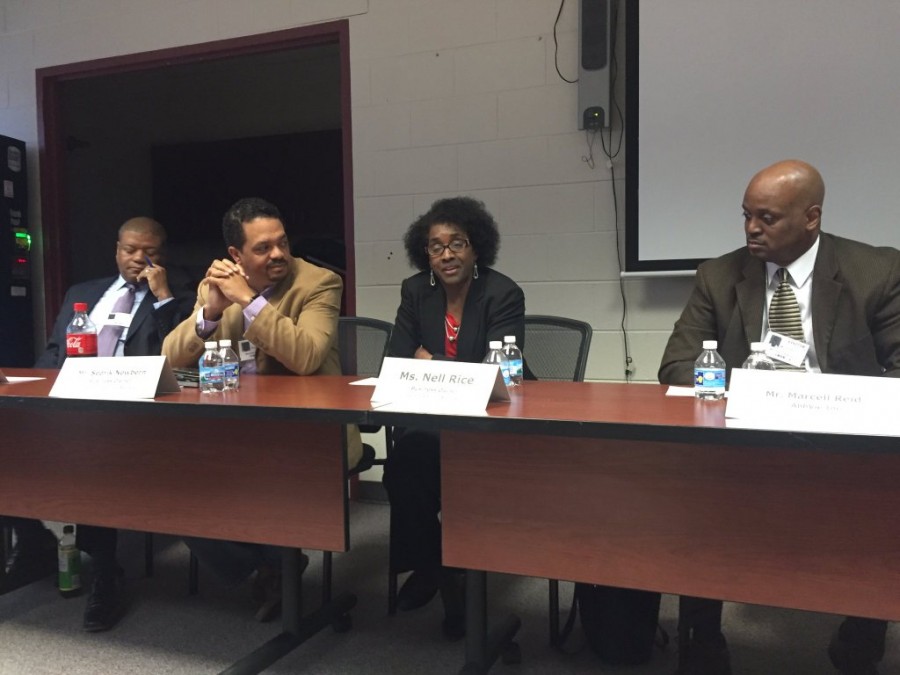 "You always gotta be better than the person next to you" - business owner Nell Rice on corporate America.

April 14 marked the second annual Career Panel sponsored by MHS’s Black Student Union. Despite being rescheduled from its original date in February, the event drew an audience of both students and staff that filled the District Meeting Room.

Among those on the panel were Marcell Reid, Abbvie Corporation; Nell Rice, owner of Debbie’s Floral Shoppe; Marcus Morgan, IRS employee; Michael Darling, Entrepreneur; and Sedrik Newbern, Insurance Broker. As prominent African-Americans, each individual shared key pieces of information on their time in school, how they came into their career and advice for achieving success in college.

“Get your education. It’s the most valuable aspect for your life,” said Darling.

Darling, among all others on the panel, stressed the importance of schooling and education. He noted that obtaining a proper education will open many opportunities for advancement in both the workplace and in other settings.

Another piece of advice came from Newbern, as he further expanded on the importance of education.

Newbern explained that it is important to surround oneself with people who will support one’s efforts at success. Surround oneself with those who are leaders and have important goals, and the hard work which is put forth instead of the time spent at parties will eventually lead to unimaginable success.

In addition to education, perseverance and ambition are important on the journey to success, according to Rice.

As the only woman on the panel, Rice discussed her struggles in the workforce as an African-American woman. Although she experienced her share of discrimination and injustice, her refusal to quit resulted in significant accomplishments in many areas of work, including occupational therapy and entrepreneurship. These characteristics she continues to employ today.

At one point during the panel, she said, “You really have to make your own way.”

The panel members spoke for about an hour and a half and demonstrated that success and accomplishments are prizes that belong to no gender, race or economic background. Anyone can reach their goals and find satisfaction in life as long as they are willing to work for it.

The hosting club, BSU, strives to promote a similar message at MHS.  It is a multi-cultural club open to members of minority races. The members strive to promote acceptance among all students and raise awareness of the various opportunities available for minority students.

For those interested in joining the club for the 2016-17 school year, an informational meeting was held Wednesday, April 27.  It was open to incoming freshmen, too.  If interested in more information, contact the club’s adviser David Mork, who acted as an Emcee for the career panel.