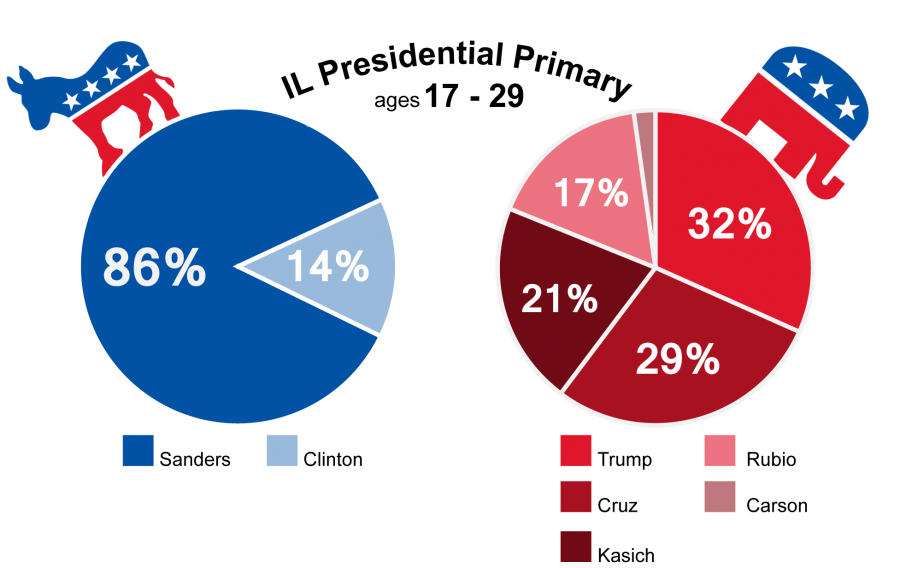 On March 15, Illinois voters lined up at polling places to cast their votes in the National Primary election. The 2016 primary was also marked by new Illinois legislation that allows 17 year olds to vote in a primary if they will be 18 by the general election, which takes place on Nov. 8.

This slight change in voting age has boosted young voter turnout. According to CNN exit polls, voters age 17-29 accounted for 17 percent of Illinois voters. In contrast, the 18-29 age group made up only 10 percent of the Illinois electorate in the 2012 general election.
Senior Schuyler McKinley voted for the first time this year and reflected on her experience.

“It was a really positive experience and super easy. It’s extremely important for everyone to vote, but especially young people because there are so many of us,” she said.

As voter turnout declines, Get Out The Vote (GOTV) initiatives are becoming increasingly common among local political organizations and parties. One of these organizations is the Tenth Congressional District Democrats (Tenth Dems), a group that sponsors national and local Democratic candidates in Illinois.
Throughout this election season, they have organized numerous voter registrations and GOTV events to bolster voter turnout, specifically for young voters.

Lauren Beth Gash, Founding Chair of the Tenth Dems, explained, “We were very involved in getting high schoolers registered to vote. . . . When people are younger, it’s good to set them on a course of being a responsible citizen.”

Leading up to the primary, the Tenth Dems visited local high schools to help first-time voters with registration.

A surge in young voters seemed to have an impact on the presidential primary; while Democratic candidate Bernie Sanders was edged out by Hillary Clinton, Sanders won a significant number of voters aged 17-24, winning 88 percent, according to CNN exit polls. A 32 percent plurality of Republican voters in this age group favored Donald Trump, who won the Illinois GOP primary overall.

Despite an increase in young voter turnout, McKinley was still troubled by these results.

“I wish that Sanders had more support and that his younger demographic got to the polls,” McKinley said. “I was disappointed to hear that Mario Rubio dropped out because he was my pick out of the other candidates.”

Senior Ashley Nensel felt a similar sense of doubt after the election, admitting that her candidate did not win the primary. However, Nensel still has confidence that democracy will prevail.

“I have confidence in our system to pick the best candidate for our country, even if I feel otherwise,” she said.

Although some may be disappointed by the results of the primary election, the general election is also just around the corner on Nov. 8. It is crucial that voters show up and participate as this race becomes more competitive.

Gash said, “It’s important that everyone has a voice in what happens in their own life, and government is very relevant to everyone’s life whether or not they participate in elections.”