Walk-en, it’s a Bear Necessity: A Look at Disney’s The Jungle Book 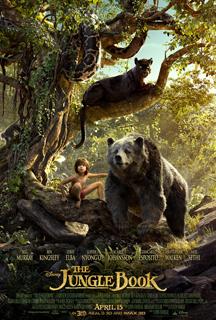 Yeah, I said it. I made the pun (see headline above)! And I’m also saying that this live-action film is everything you would want out of a remake of “The Jungle Book.”

“The Jungle Book” stars newcomer Neel Sethi as the red diaper boy Mowgli– an orphan who is left in the jungle to get feasted upon. But then a panther (yes, an actual computerized panther, ladies and gentlemen) named Bagheera (Ben Kingsley) snatches him and teaches him to grow up like a wolf (It’ll make more sense why he’s raised among the wolves when you watch it). Then some years later, Mowgli is being preyed upon by a tiger named Shere Kahn (Idris Elba). Kahn, who is the largest villain in the jungle, wants to have a little chompy-chompy on our kid hero, so Mowgli must run away and try to get as far from the jungle as he can in order to protect his wolf-amily from being persuaded to hand Mowgli over.

There’s more to it than that. Mowgli meets different animals like Baloo (Bill Murray), a bear with a comedic and cuddly side, King Louis (Christopher Walken), a humongus organtanuan, and Kaa (Scarlett Johansson), a snake with hypnotizing problems.

But I’m just going to toss it out there and say that real or not, the cast does indeed deliver. It made me feel that the animals looked all entirely too real (which is kind of weird if you watch “The Revenant” before going into the film) with both the star-studded CGI and the impressive voice talent. And that’s pretty much all I can say really about the acting. So I might as well talk about the only thing this film has:

Positives. But I shouldn’t be that nice because, if you don’t already know, I’ve been analyzing films for a long time now.

So first off, the plot is very enticing as you witness a “man-cub” perform crazy parkour stunts around an animal-infested jungle. And in the plot (as I said before), Shere Kahn wants to throw some Salt and Pepper on top of Mowgli, resulting in one of the most confusing scenes in film history. In the scene, Kahn is rapidly moving toward Mowgli until Mowgli falls down a long trench that leads out into a muddy section of the jungle. As Kahn continues to show Mowgli a snarky attitude, a large stampede charges its way toward Mowgli inside the trench. I found it funny that it is exactly like that one scene out of “The Lion King,” and yes, it’s intense at first because there’s a bunch of animals running toward Mowgli, but it soon turns into a huge comic strip because he’s standing directly in the middle. Okay, you’re supposed to run away from the stampede, not try to run over to the side in the very tight-limited space available to you.

It worked a lot better in “Abraham Lincoln: Vampire Hunter,” but that’s because Lincoln was in a much wider area than Mowgli had in this film. And somehow, in some way:

I’m not going to dwell on that any longer, so why don’t I go back to those positives I mentioned, shall we?

Christopher Walken is the main “highlight” in this film because when we’re first introduced to this enormous orangutan, he starts to talk to Mowgli under a structure of darkness. And I had no idea he was in the film until I saw the hand gestures he was giving to Mowgli in a very Walken type. His attitude toward Mowgli is menacing and dark, but when we finally get to see King Louis’s face, it looked like the makers of this film took Christopher Walken’s face and placed it on an orangutan. You’ll see it when you view the film, but I can tell you 100 percent that you will not be watching the film 15 minutes after that because you’ll be on the ground dying from laughter.

But once you get over it, you’re right back into the fantastic world that was brought back to our generation because of one man:

Favreau is an amazing director due to his many films like “Iron Man,” “Chef” and “Cowboys and Aliens.” And he brings all of these exciting films to his homerun hit: