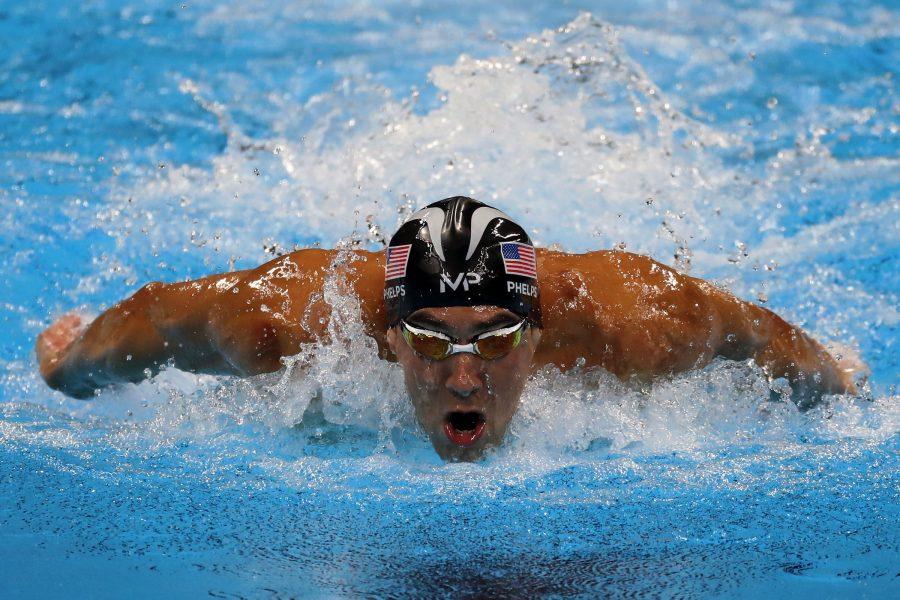 Phelps swims in 100-meter butterfly at the Rio games.

After years of hard work and endless competitions, these athletes have made it to the world stage and earned the support of the U.S. They go through hours of training, the rigors of qualifying and then the pressures of national and international competitions. Several MHS students have shown their support and fandom for these incredible athletes.

“I watch the Olympics because it is awesome to see every country in the world come together to compete with the best of the best representing their country,” said Abram Nazario, junior.

These Rio Olympic Games showcased some of the world’s best athletes this year. They include Michael Phelps, who competed in his fourth games; Simone Biles, who came in as the number one gymnast and finished as number one; Allyson Felix, who came away with two golds and a silver, becoming the most decorated female sprinter in the world; Alex Morgan and the U.S. women’s soccer team, who came in as the world’s number one team; and Carmelo Anthony, who also played in his fourth Olympic Games with Team U.S.A.’s men’s basketball team and won his third gold medal(fourth in total).

“My favorite Olympian has to be Michael Phelps because he IS the greatest of all time!” said Ryan Magee, senior swimmer.

Phelps actually is the greatest of all time, or abbreviated as G.O.A.T. He is the most decorated Olympian ever to compete in the summer games. Starting in the 2000 summer games as a 15-year-old kid and finishing in Rio at the age of 32, Phelps has accumulated 28 medals, 24 of them being gold. In 2008 at the Beijing games, Phelps broke a record (seven golds in one Olympic competition by Mark Spitz) after winning eight gold medals in one Olympics in all eight of his events. After a decorated career, these 2016 Rio games would be Phelps’s last time competing.

Gymnastics usually tends to be a fan favorite as well for both guys and girls.

“I would say that Aly Raisman is my favorite gymnast due to the energy that she puts into her routines. Also, her parents are hilarious to watch [when she is performing],” said Joseph Kreis, senior Olympic fanatic.

Raisman is a part of U.S. women’s gymnastics team. She was a significant part in winning gold for the U.S. team competition by posting a huge score in the floor competition with a 15.5. Also, Raisman took silver in the individual all-around competition, finishing second behind teammate Biles. Raisman also took away silver in the Rio games while competing in the individual floor competition. Additionally, her parents are her best fans, wincing and squirming in their seats during every event in which Raisman competes.

With a location such as Copacabana Beach in Rio, beach volleyball also drew a large following this year.

Rio is Walsh-Jennings fourth Olympic Games and her first with new partner Ross, whom she beat in the gold medal game in London. Walsh-Jennings has won gold in three straight Olympic Games, and this year in the Rio games, she and Ross secured a bronze medal. This last medal made Walsh-Jennings the most decorated volleyball player ever in Olympic history.

NBC received on average 27.8 million viewers daily throughout the first 10 days of the Olympics, and that doesn’t include the online viewers. The events drawing millions of viewers usually took place during prime time, 7 p.m. central time/ 8 p.m. eastern. The events that aired during primetime included 100-meter freestyle, 4×100 freestyle relay, 100-meter dash, 200-meter dash, Gymnastic team and all-around events, the decathlon, soccer, beach volleyball and many others.

“My favorite Olympic event probably is the 800-meter dash because it is the longest sprint, and it’s a combination of both a sprint and a long distance race,” said Ben Krauss, senior cross-country and track member.

This year, two Americans competed in this event, finishing fourth and eighth, but the winner of this event was Kenya’s David Rudisha. Rudisha has won gold in the last two Olympics and holds the world record for this event with a time of 1:41.01.

Another team to win gold in the last two Olympics is the men’s U.S. basketball team.

“I like watching the U.S. men’s basketball team because they’re an unstoppable force on the court,” said Nolan Seeger, junior.

The U.S. men’s basketball team really is unstoppable on the basketball court. The U.S. team was the only undefeated team moving on to the quarterfinals with a record of 5-0. Under Coach Mike Krzyzewski, the men’s team has won its last 74 games. Coming into the Olympics, the team won all of its exhibition games by an average of 50 points in each of the first four games. Critics say that this team isn’t close to the dream team, which competed in the ‘92 Barcelona games with the likes of Michael Jordan, Scottie Pippen and Magic Johnson, but the U.S. is aiming for another gold medal, which they came away with on the final day of competition. This gold medal was the team’s third straight.

Through all of the action, athletes and anticipation, the U.S. came away with the most medals won in this year’s games. The U.S. finished with a total of 121 medals– 46 gold, 37 silver and 38 bronze. The next closest team was China who came away with 70 medals, followed by Great Britain who secured 67 medals.