Independent Student Directors Discuss Their Work on One Acts 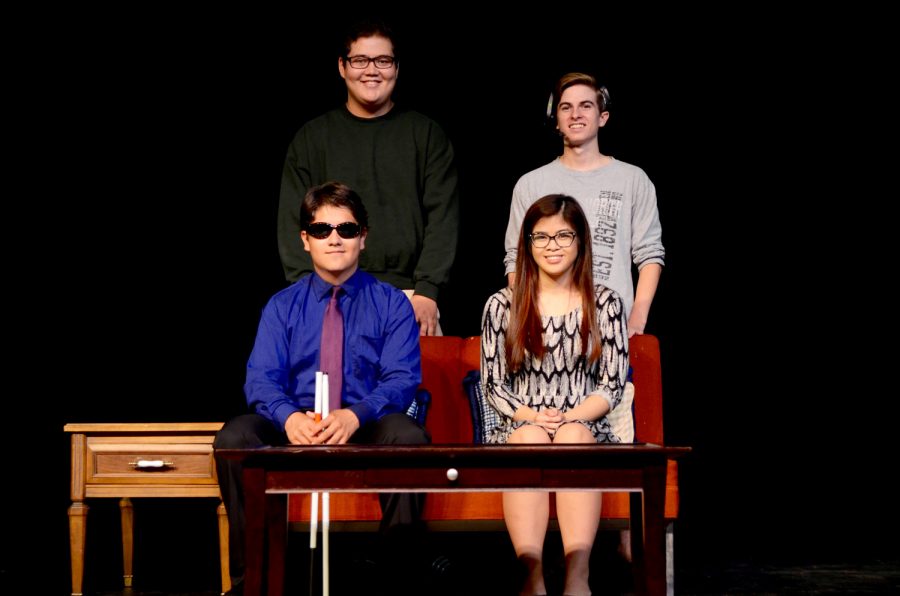 The One Acts took place on Sept. 6 and 7 in the MHS auditorium. The student directors were asked the following two questions: How was your experience as an independent director? Did the production go as you had expected?

Brenden Paul (Double Date): My answer to the first one would be that it was a fantastic experience. Leading a group of people so willing to work and listen and follow along, no matter how crazy I sounded, was very rewarding. I felt that I could be myself and put on a great show at the same time, which happened! As for the second question, the production was nerve-wracking. Though we were excited, all the directors were hopeless to the success of our show as soon as the lights went up. However, we were pleasantly surprised. All of our productions went very well, and none of the directors left the auditorium disappointed.

Hannah Weiss (Raincheck): My experience as a director was amazing. It gave a whole new perspective on the whole production process. For me, directing was really a test of my abilities– testing and applying what I learned throughout my Mundelein Theatre journey. Directing gave me the ability to coach younger people or people who don’t have much experience. This experience helped me to grow as a performer as well as an overall thespian. I couldn’t have been happier with my production. Despite my actors forgetting some of their lines on opening night, they recovered well, and it was still hilarious. The closing night performance went off without a hitch. They remembered all of their lines, landed their jokes and dazzled the audience. It was perfect, and by the end of the night, I was such a proud mom. Seeing my work being presented on stage was nerve-racking, exciting, scary, relieved, astonished and overall a really crazy experience. If anyone is lucky enough to stumble upon the opportunity to direct, they should definitely take it.

David West (Blind Date): It was definitely a new experience for me, and I feel that by being able to direct, it has helped me gain leadership experience that will benefit my future. The production wasn’t exactly how I expected it to go, but in the end, it was definitely a success.

Payton Cousins (Happy No-lidays): My experience as an independent director really opened my eyes and gave me a unique perspective on theater. Although challenging at first, directing my own one act has not only made me a better actress myself, but also gave me a look into what our own director, Mr. [Jonathan] Meier, goes through on a regular basis. It was really amazing to see my vision come to life right in front of my eyes. I’m so lucky that I had such an amazing cast (Angela Kordik and Josh Saunders) and amazing Assistant Director (Bella Canela) to help the creative process develop. The production went better than I could have ever hoped.

Emily Parduhn (The Uprising):  My one act combined two of the activities I am most passionate, Best Buddies and theatre. My one act went wonderfully– so wonderfully that honestly I am still in shock over the amount of support and positivity I received. Seeing the students on that stage  performing for the first time is something I’m never going to forget. Everyone deserves the opportunity to express themselves, whether it be through writing or painting or singing or theatre, and I am so glad to have been able to give the members of Best Buddies a stage.

Thomas Ferro (A Midnight Clear): I had a great experience being a director, and I think it mainly had to do with my fantastic cast (Joey Salit ’19 and Dan Haller ’18) and my incredible Assistant Director (Brianna Moderhack ’18). Everyone who was a part of my one act really helped to make it what it was. I don’t think it would have turned out nearly as great if it weren’t for Joey, Dan, Brianna and my advisor, Ms. [Sara] Gunther. They really embraced the ideas I had and were not afraid of performing the play that I chose (which is based on a very touchy subject). They always came ready to work, and it made my first experience directing that much easier. That being said, directing is quite difficult. It’s a lot different from being onstage, and the moment before your show starts is probably the scariest moment of life because you have all of these ideas of how you want it to turn out, but in the end, it’s up to your actors to get your vision across. If they had wanted to, my actors could have gone up there and done the show with completely different blocking, and there’s nothing I could’ve done about it because it’s a performance. However, I loved every moment of being a director. It was so cool getting to show the audience my interpretation of this amazing and very relevant play, and I could not have been happier with the result.

Alex Frumkin (The Road to Nineveh): My experience as an independent director for three weeks was phenomenal– the greatest experience I’ve had in almost 10 years of theatre. It was very difficult to bring a cast together and work so intensely on a show that you only have three weeks to prepare, but it was such a blast that it never felt stressful. Being in charge was a bit intimidating at first, but I feel like it made me develop into a better actor (and person, in general). The production didn’t go as well as I planned– it went better. My cast and assistant director were perfect; they made those three weeks what they were, and they brought my show to a level I never thought it would reach. It was honestly a dream come true.

Sheridan Hurtig (Tainted Love): But my experience as an independent director was absolutely amazing. I’m used to being in the shows, so gaining a different perspective and knowing what it’s like to be in a director’s shoes was very interesting. It definitely went how I expected it. They performed amazingly and I couldn’t be happier with how they performed and took my notes to act out an incredible work of art.

The Mustang did not hear back in time for publication from Jenna Panos.