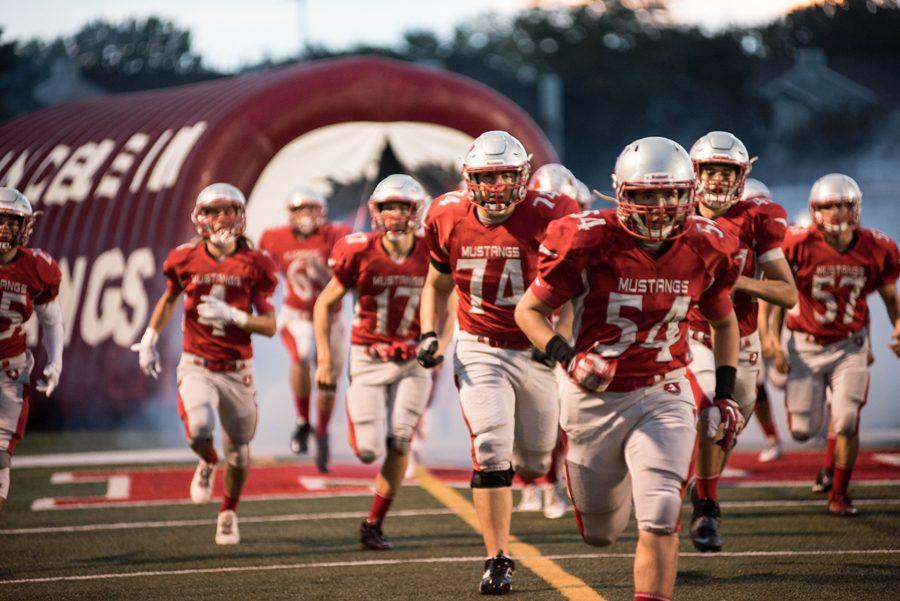 The spirit and energy Red Rage has given sports teams, such as the MHS football team, has been exhilarating and influential for the fans and the players. However, Varsity Head Football Coach Larry Calhoun said that fans should commit to staying throughout the whole football game and should stay in the Mustang spirit, win or lose.

On Sept. 2, there was only a couple seconds ticking on the clock when number 22, Abram Nazario, junior, scored the field goal, breaking the tie between MHS and Elgin for the win. The crowd went haywire, the band rushed to play the fight song with ecstatic smiles on their faces, and the cheerleaders and dancers gathered around Red Rage to cheer on the team.

MHS took home the win when Nazario broke the tie in the last few moments of the game against Elgin High School, ending with a score of 17-14. The next Friday on Sept. 9, however, during MHS’s Homecoming game against Zion Benton High School, MHS lost 56-21.

By the end of the game, the Red Rage student section vacated quickly. Coach Calhoun shook his head as he thought about it.

“When we come to the stand, it hurts my heart just a little bit that a significant portion of the crowd has left because the results weren’t what we wanted,” said Calhoun.

“I’d like to make an appeal to our fans, but it may sound like I’m whining,” Calhoun continued. “I love the tradition of us coming to the stands and singing the fight song after the game. I like that bond between us and Red Rage and the student body.”

“So I would appeal to our student body to stick around because we’re still Mustangs, win or lose,” he added.

Many teachers, coaches and students appreciate the energy and spirit Red Rage gives during games or school events and want it to be there no matter the end results.

Nazario said he savors every moment of the game, especially when Red Rage erupts in a cheering frenzy.

“[Red Rage] gives us a lot of energy, especially when you’re on the sideline,” said Nazario. “You can hear Red Rage cheering, giving us chants and stuff that really brings up the energy and gets us more motivated to play and to hit harder and to win the next play and to get the touchdown.”

“Just being on that opening kickoff on the field just is the most amazing feeling and running out of the tunnel with the team is just amazing to run out and see everyone in the stands and the band is right there playing and just to be in the huddle with the [football] team and just being on the field and playing with a passion and doing what you love,” said Nazario.

With the energy coming from the band, Red Rage, the cheerleaders and the dancers, MHS’s student section couldn’t be any more powerful to cheer on our football team, “win or lose”, as Calhoun and Sturgeon both said.

Calhoun expressed his immense pride in the MHS student section, and along with the Marching Band, Calhoun asks Red Rage to make the same kind of commitment to our football team.

“I don’t care if we’re winning by fifty or we’re down by fifty, the scoreboard does not affect our effort,” said Calhoun. “I literally don’t care about the score board ‘till the end of the game. I’d like the fans to look at it the same way.”