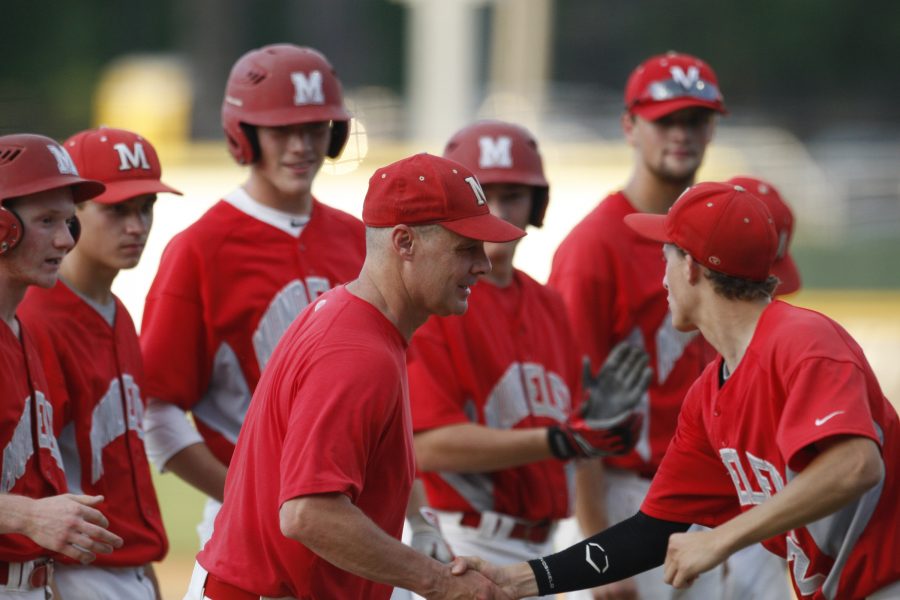 Todd Parola, head coach of the varsity baseball team, is known for his successful coaching career at MHS.
Parola started coaching at the school in the early 90s but as a volunteer coach. He was also working another job at Baxtor Healthcare. After realizing, though, how much he enjoyed coaching and how much he didn’t enjoy wearing a suit and tie every day, he went home to his wife and told her that he was quitting his job and was going back to school to become a teacher.

“I looked forward to being with the kids [athletes] all day,” he said.

Before Todd Parola became a coach and a teacher, he had played baseball his whole life; he played little league, high school and then college ball at Indiana University, which he described as, “the best time of [his] life.”

In college, he studied finance and business management before going back to school to pursue what really mattered to him.

Baseball was meant to be a part of his life.

Todd Parola’s favorite parts about coaching are the athletes and the unique relationships he has with them. One very important relationship he has is with his son Senior Brett Parola, who currently plays for him right now.

“There’s two different parts of the situation. One is that he is harder on me than anyone else,” said Brett Parola.

He further added how Todd Parola will make sure Brett will correct his errors, and if it means giving him a harder time, then he will do it.

“On the positive side,” said Brett, “I can be myself, and I don’t really have to think ‘what does the coach think about me?’”

Senior Will Michalski, current player for Todd Parola, said that all the players have a ton of respect for Coach Parola because he doesn’t treat them like kids.

“It feels like you’re a part of a college team because of his coaching style… He holds us to a high standard, but as a coach, he does a great job in helping us get to that standard,” Michalski explained.

Coach Parola always makes sure that the team is ready for the season.

“We are always one of the most prepared teams in the state at the start of the season…..and that’s because of what we do, starting with “Hell Week” on the very first day of the season,” Brett Parola said.

“Hell Week” is when the players have workouts before and after school and even on Saturday.

But this is why MHS is so successful at baseball.

“He is so prepared,” Brett Parola said about his father.

Todd Parola’s coaching style has led him and the teams to several great achievements. Over this past summer, the team made it all the way down to state– the furthest any baseball team at MHS has ever gone. At state, MHS played Providence Catholic High School, which is a three time state championship team. MHS lost 10-3.

Todd Parola said it was a great experience and was one of the biggest highlights of his career. He added that the run to state has created memories that will last him a lifetime.

His favorite memories during those playoffs included, now Alum, Zack Zagula’s grand slam in the state semis and “looking up in the stands and seeing all the fans.” These images “brought up a lot of memories, a lot of emotion.”

Another memory from last year’s season was the phrase, “Keep Rowing.” Todd Parola explained how during “Hell Week” the boys had to memorize quotes and the meaning of them. That one just stuck with the players, and it became the team’s theme.

Michalski explained, “The “Keep Rowing” theme stuck because after a slow start to the season (9-6), we started to heat up. We had a long winning streak, and it seemed like the season was starting to turn around for us. “Keep Rowing” was just a fun way to remind our team to keep working hard and to leave everything out on the field.”

While Coach Todd Parola is known for his high expectations and his demanding ways with his teams, these traits are admired by his players because they have led to great achievements and a positive impact on the school.