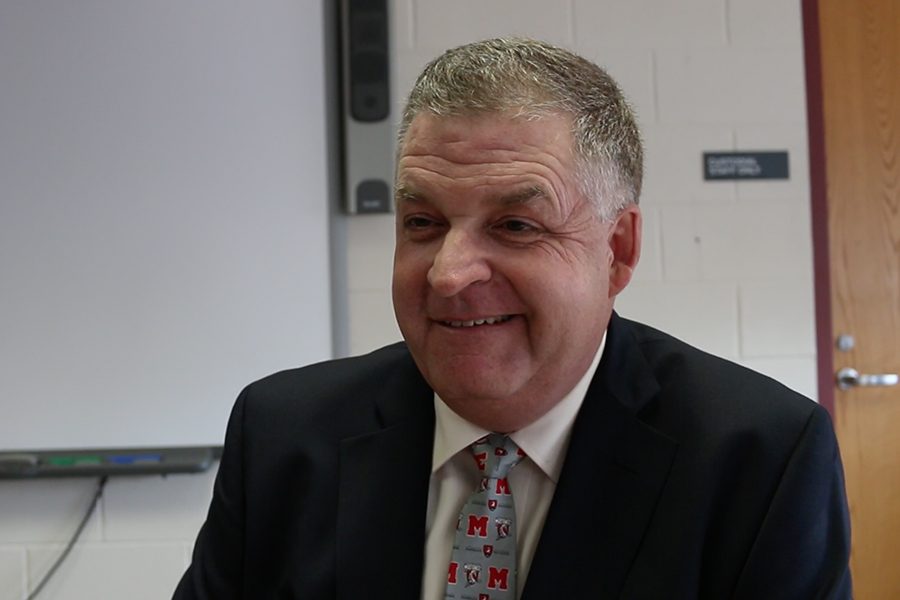 Since 2013 Steve Lentz has been serving as the mayor of Mundelein—now, he’s running for re-election to continue finishing the projects he has started.

“I want to keep the good changes going and the ball rolling on moving Mundelein forward,” Mayor Lentz declared.

Lentz’s journey as a public servant traces back far before his current position as mayor. After moving to Illinois from Southern California in the 90s, Lentz began volunteering as a coach for his children’s sports teams.

“For me, it all started with volunteering as a coach. I was asked to join the board of MJFL [Mundelein Junior Football League], and eventually, folks on the Mundelein Village Board asked me to run for trustee.”

Senior Aaron Woolford, now a varsity running back and safety for MHS, played on Lentz’s team while in MJFL.

“I think it’s pretty cool to be able to say my former football coach is the mayor now,” Woolford said.

During Lentz’s time as trustee, he became drawn to the redevelopment that had begun in downtown Mundelein. New and old local businesses started to flourish, and he knew he wanted to play a bigger role in this change as mayor.

“It’s so rewarding to work really hard on a project and to see it start coming to fruition. As mayor, I really wanted to ramp that [redevelopment] up and make a big impact on Mundelein,” Lentz explained.

Lentz’s vast vision for Mundelein’s downtown area materialized itself in the Business Incentive Grant, or B.I.G., program. B.I.G. allows local businesses to receive grants from the village to make improvements and become eligible for sales and property tax rebates.

“In the past, if you weren’t a big business, you weren’t really considered when it came to incentives,” Lentz continued. “What I ran on was the concept of bringing those big company incentives down to the smaller businesses.”

Luke’s of Mundelein became the first business to take part in the B.I.G. program when it moved to a larger location in 2013. Owner Mike Majestic opted for this renovation after he felt Luke’s had outgrown its previous location, and the village helped cover the $11,000 cost of creating an outdoor patio.

“Originally, there was no patio out there, so I decided to turn the outdoor lawn into an outdoor eating area,” said Majestic. “The village went ahead and reimbursed me for half the cost.”

Another mayoral accomplishment that Lentz expressed particular pride for started during his time as a trustee: the Hawley Street construction project. Lentz worked on the initial plans for Hawley Street while serving as chairman of the transportation and infrastructure committee. Once he became mayor, Lentz made it an objective to finish the job he had started, which required the acquisition of property from more than 40 different entities.

Lentz explained, “I put the pedal down and said ‘we’ve got to get this going.’ It wasn’t easy at all. Some of the properties were owned by banks that wouldn’t return our calls, but finally we got it done.”

The Hawley Street project, which Lentz estimated would be finished by the end of this year, took nearly eight years to complete. Lentz summarized these numerous delays he experienced while working on Hawley Street in a simple statement: “Things take a while in government.”

This consideration for the pace of local government strikes at the core reason why Lentz seeks re-election in 2017. Although he feels proud of the changes he has initiated, he would like to continue building upon them.

Lentz reflected on the programs he began as mayor and elaborated on his plans for the future.