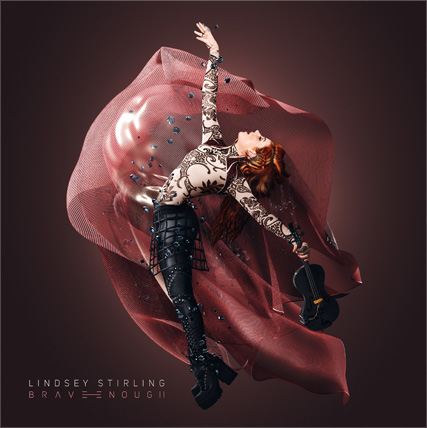 Lindsey Stirling has always been one of my favorite musicians from her start on YouTube with famed song “Crystallize” to her now newly released third album “Brave Enough”.

Her second album “Shatter Me” and this new album both carry similar themes about finding peace through hardships and loving no matter how tough the road is. Her music displays courage, and “Brave Enough” is a strong, bold move for Stirling since she dueted with many different, and especially diverse, artists who combined their vocals with the beautiful, angelic sound of her renowned violin.

While the entire album contains several beautiful songs, there are a few important ones to take note of since they define the album.

To achieve her end game, Stirling seemed to have considered her co-artists carefully, choosing musicians who are known for their deep and emotional mixes. Many of the featured artists on this album include Christina Perri, Carah Faye Charnow, Dan+ Shay, ZZ Ward, Raja Kumari, Lecrae, Rivers Cuomo and Andrew McMahon.

For example, her debut song “Brave Enough”, which features Christina Perri, has lyrics like “What we had was beautiful; I didn’t want to wreck it all” and “I wish I was brave enough” that make a listener’s heart ache.  Once the lyrics build up to a drop, Stirling plays her heart out with a solo that is catchy yet mesmerizing, leaving the listener admiring the sound of her instrument. A song comparable to this one would be Perri’s “Thousand Years” as the lyrics are strikingly similar, yet delivered at a slower pace.

Another important song is “The Arena” since it has a strong start, instantly capturing the listener’s attention with a rogue-sounding violin.  As the pace moves faster, the sound of the violin proves to be amazing, showing Stirling’s talent. When the pace breaks for an emotional pause, it’s picked right back up again with Stirling leading the listener on a complex strand of notes—a bold move for Stirling and a mesmerizing one for the listener.

“The Phoenix” is similar to “The Arena” since the start of both songs has a moving pace. The listener is led further down the rabbit hole when the beat builds up to a more EDM (Electronic Dance Music) sort of twist. The song’s name is appropriate since the melody starts out strong, burns up, turns chilled and then resurrects with a rock vibe.

Many followers on her YouTube channel exclaim that it is similar to her song on her first album “Elements”, yet a more intense version of it. This song has been the most admired one on the album by her fans because it really shows what she can do while remaining reminiscent of where she has come.

Surprisingly relaxing given the EDM-like sound to it, “Prism” has a catchy rhythm with similarities to much of the music on her other album “Shatter Me.” The ‘hip’ song sounds a lot like “Heist” and “Night Vision” fused together off the second album but with a hint of “Swag”, her eleventh song on “Shatter Me”.  This song is much needed on “Brave Enough” after “Those Days” and “Where Do We Go”–the two songs previous to this one—because it’s another upbeat track with less depth but still filled with Stirling’s creative musical inspiration.

An unexpected surprise on the album is “Mirage” because it draws inspiration from Indian/ Bollywood music.  This is not something seen in her previous albums as those were definitely EDM-inspired.  But “Brave Enough” is about more diverse music with this song being the most diverse by far.

Although different, it is a stellar addition to the album with its steady melody and irresistible beat for dancing.  Plus, her 30 second solo at the beginning really showcases her talent with the violin.

The song most people will recognize is the radio hit “Something Wild” featuring Andrew McMahon.  It also is featured in the movie “Pete’s Dragon”.

The song starts slow but eventually finds its pace and keeps it steady throughout. Once McMahon picks up the verses leading into the chorus, the music bursts all at once– the violin, the drums and his voice getting louder with each word.  The lyrics themselves are also worth listening to as they contain an inspiring message before leading into the last song on the album.

As the closing song, “Gavi’s song” contains many emotional parts because it is about Stirling’s closest friend who keyboarded for her. It is special for her and her dedicated fans because Gavi died from cancer earlier this year. The ambiance of the song and Stirling’s vocals are outright amazing, outstanding and ethereal. It shows how much Gavi meant to her, and she outdid herself with this song.  It truly ends up defining the album.

The songs on “Brave Enough” are touching and emotional with each lyric or violin note played. It displays exactly what Stirling wanted it to show because it demonstrates her bold move to collaborate with a variety of artists, including with popular EDM DJ Zedd, a match for which many fans have been waiting.  With all its diversity and all its emotion packed into one bundle of inspiration, this album has become a perfect addition to Stirling’s career and her music history.