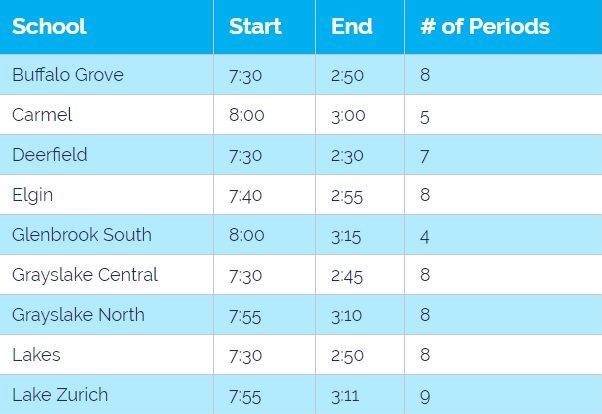 To match other schools in Lake County, the MHS board of education has voted to change the bell schedule for next year; however, the change hasn’t gone far enough.  A new schedule should also include a later start time.

Since most students feel their voices were not heard about the schedule change from block to an 8-period day, the editorial board of The Mustang is offering one schedule proposal that still has a chance to be incorporated in the years to come.

They have considered a first bell at 9:25 a.m. or one at 8:30 a.m. like Lincolnshire’s Adlai E. Stevenson High School, which implemented this change for the first time this year.

After hearing about these options and researching local school start times, The Mustang editorial board proposes that the committee strongly considers starting the day at least no earlier than 8:30 a.m.

It seemed as if the committee was leaning toward the move to a permanent late start time but has only voted to move out of block scheduling and into an eight-period day so far. When this decision was made, the committee considered the many variables that play a factor into a changed schedule.

“We cover everything. Everything from course load, student wellness, lunches, intervention and enrichment and passing periods,” explained Buenik.

One factor of student wellness and academic success is adequate amount of sleep, which a later start time would offer to the student body.

“Sleep does so much. It cements learning by helping us both encode and retrieve memories, including physical ‘muscle’ memories.  It kills tumors, boosts our auto-immune system and is when children grow (due to the secretion of human growth hormone),” said Social Studies Teacher and President of the Teacher’s Union Dean Petros, who also sat on the bell schedule committee. “A lack of sleep inhibits the brain’s ability to temper down strong emotional responses when people are stressed, which causes brain patterns not unlike those with serious psychiatric disorders.”

Academically speaking, then, studies have found students perform better with more sleep, and this is a strong reason for why high schools need later start times.

“When the Minneapolis public school system pushed back their starting times, SAT scores rose 100 points (which would be the equivalent of 2.5 points on the ACT),” said Petros.

Students need sleep for a myriad of reasons, mostly relating to better brain function and performance in classes.

The consequences of sleep deprivation during the teenage years are particularly serious. Teenagers spend a large portion of each day in school; however, they are unable to fully take advantage of the learning opportunities afforded by the education system since sleep deprivation impairs their ability to be alert, pay attention, solve problems, cope with stress and retain information. According to the National Sleep Foundation, adolescents require at least as much sleep as they did as children, generally 8.5 to 9.25 hours each night in order to perform at their best academically.

“I would guess that most teachers would prefer later starts.  However, I doubt that most teachers are aware of the sleep research that demonstrates the importance of sleep.  I think that most teachers value sleep [for the students] and feel that it is important,” said Petros. “However, I am sure that some of the psychological findings regarding sleep loss would be an eye opener for many faculty members.”

Additionally, a permanent late start schedule would be beneficial for students involved in sports, clubs or those with jobs. The inclusion of a later start would give students more time to get their work done, especially if they have other responsibilities outside of school.

While the committee is aware of such research, the current focus is the shift from block to a more traditional bell schedule, but there seems to be no great obstacle preventing the committee from changing the bell schedule to include a later start time in the future.  Really there are simply minor inconveniences that the school community will have to work to address, but the benefits of doing so will outweigh any inconveniences.

“The initial committee examined a permanent late start schedule, but at this time, it was determined that we cannot move forward due to busing, finances and a need for community time study,” said Buenik.

As for time consideration regarding the length of the school day, a ‘full school day’ is considered at least a 5-hour-day. Therefore, a later start time could bear weight on the length requirements for the school day.

But MHS has an extremely long school day; students spend 7 hours and 35 minutes a day in classes compared to most other Lake County schools that keep their school day around 7 hours.

As far as the financial implications of a later start time, it seems the only major factor might be bus sharing. MHS currently shares 10 bus routes with Mundelein District 75 and two routes with Diamond Lake school district.

MHS Business Manager Andrew Searle explained, “MHS saves over $200,000 from bus sharing,” and the other school districts also save money.

Therefore, if MHS were to opt for a later start time, other Mundelein school districts would have to adapt their schedules as well. This would benefit students because they’d increase performance by getting more sleep from a younger age, which could lead to more productivity later on in high school.

“We may have to sit down with District 75, and they may have to change their start time,” Searle said, “but I think we could work it out.”

With little financial issue and much more evidence supporting the need for a later schedule in the better interest of students, all that is left to do is wait for a much-needed change.