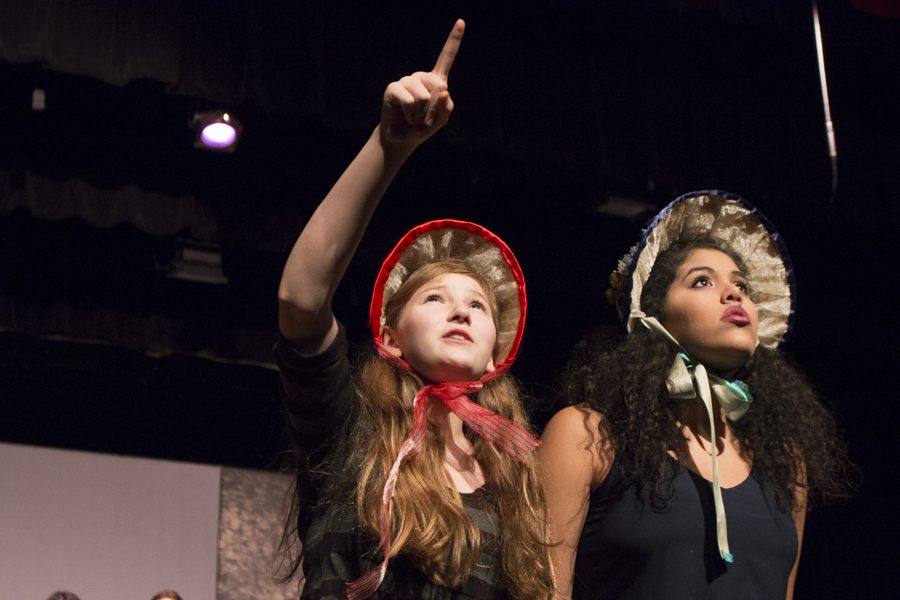 Mundelein Theatre students are bringing the silver screen to the MHS stage for this year’s New Faces production.

“Completely Hollywood (abridged)” incorporates references to over 180 historic Hollywood films in a lighthearted, off-kilter homage to the rich history of blockbuster culture. But this New Faces production is about more than just showcasing the stars of Hollywood—it also offers a chance for students in the Mundelein Theatre program to get experience on stage.

Director of the play and MHS Instructional Aide, Sara Gunther, explained, “the purpose [of New Faces] is to get more students involved in the theatre program at an earlier stage in their high school career.”

While New Faces aims to encourage younger students to participate in theatre, upperclassmen can also be in the production.

Gunther continued, “There are no cuts, so everyone gets an opportunity to be on stage if they want that opportunity.”

All throughout high school, junior Nikki Wegner has worked with the theatre program as a part of stage crew. This year, she decided to audition for the fall play as well.

“I tried out for the fall play, but I didn’t get in. I wasn’t too upset, though, because I knew I’d be in New Faces,” Wegner said.

For some students, appearing in New Faces will not be their first time performing on stage. Sophomore Kimberly Barr has been involved in theatre since the fifth grade and attended Mundelein Theatre shows throughout her childhood.

Freshman Allan Rodriguez’s first experiences with theatre were similar. He started doing theatre while in middle school, and had a role in the One Act plays earlier this year. Throughout his time working with New Faces, Rodriguez has come to appreciate the opportunity that this production creates for newer actors.

Rodriguez and Barr play two of the six narrators in the first act of “Completely Hollywood”, guiding the audience through common cliches that occur in classic movie plots. They often speak to crowd members directly: at one point, sophomore Joey Salit, another narrator, asks an audience member for their favorite movie.

Gunther attested to the amount of preparation needed to pull off this unorthodox use of crowd participation, adding, “ [the students] did some research into Hollywood movies and the different characters that get referenced. We’ve also been been practicing different scenarios to simulate how different audience members could react so that, hopefully, it goes well on the first night.”

In the week leading up to opening night, the New Faces cast and crew have been working to put final touches in place, rehearsing for about six hours everyday. “Completely Hollywood” will open Friday, Oct. 28 with shows at 3:45 p.m. and 7 p.m., and another performance on October 29 at 7 p.m..