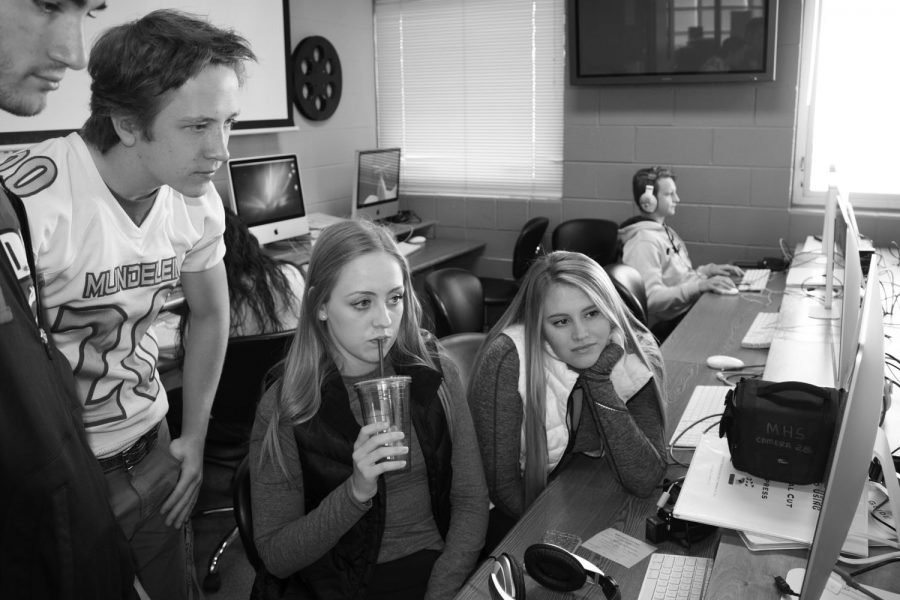 Students in the TV apprenticeship class prepare for the Friday Focus.

Over the summer, MHS received several renovations and additions. The new STEM building was completed right in time for school, classrooms were updated and new desks and chairs were brought in.

However, there was one class that took a different approach to the changes. Instead of physical classroom changes, this class made a curriculum change.

Kent Meister, TV and broadcasting teacher, decided to change the way his TV apprenticeship class was run and taught.

“The biggest difference is that there aren’t any morning announcements on Monday, Wednesday and Friday. Instead we have a [bi-] weekly show called “Friday Focus”, which sums up all of the events going on in school,” explained Nick Pawlicki, junior student. “I think Meister wanted to try something new and give us more time to focus on individual work.”

In recent years, Meister’s class has run the morning announcements three times a week, which became a major focus of the class.  Now students have more time to direct and shoot videos with the best videos being shown on the Fridays the new segment airs.

“I wanted to fill a hole in my curriculum,” said Meister. “I wanted to teach my students narrative skills, how to write a good story and how to ask questions and put themselves out there.”

The “Friday Focus” is a more in-depth spin-off of the morning announcements and is still shown on certain Fridays during homeroom.

The “Friday Focus” is a compilation of videos exploring numerous topics and events that happen around MHS, and like the former announcement set up, there are still talking segments in which anchors introduce the videos and give the school news on upcoming events.

“The “Friday Focus” is every other Friday because a lot of work goes into it, so we wouldn’t be able to make one every week,” said Rachel Tipperreiter, senior student. “I like class this way because it gives students the chance to make their own videos and collect their own footage to make a story that interests them.”

Tipperreiter has already had a video shown on the “Friday Focus” when she created a video for the beginning of the football season in August.

In order to produce the video right before the first game of the football season on Aug. 26, she said she had to attend a ton of practices and get a bunch of interviews from both players and students alike.

“I just tried to get the school hyped,” said Tipperreiter.

This new approach to the broadcasting course has received positive feedback from the students in the class.

“[Class] gives us more freedom and responsibilities. Also, it gives us plenty of time to get work done,” added Pawlicki.

Another reason for the change is that Meister wanted to incorporate news around Mundelein with the news inside MHS.

“I wanted to connect the community with MHS,” said Meister.

As a result, the “Friday Focus” covers dozens of topics related to the MHS and the community. For example, there are stories about new restaurants, school-related information, “Someone You Should Know” and clubs.

Stories are chosen each Monday when mentor students, those who have taken the class multiple times, meet with Meister to discuss potential topics.  Some of these topic ideas come from staff members who submit requests to the program.

To accommodate the various stories and the required production work, Meister has a unique classroom set up with two separate classrooms side by side in the Media Center. There is a classroom with the control room and a second one with a studio.

In the studio is a giant green screen that has seen more use with the change to the course.

“We use the green screen for the ‘Now You Know segment’ and new virtual sets. I would also like to try and get the weather,” said Meister.

The green screen allows students to create fabricated backgrounds that match their stories.

For example, in the Sept. 30 “Friday Focus”, Junior Sydney Herchenbach, used the screen to create her ‘Now You Know’ segment about upcoming club meetings and new club offerings at the school.

If students would like to see these “Friday Focus” segments, they can tune in every other Friday in homeroom or catch past airings on the D120 website.  They are also posted on YouTube.

“It is more work than just regular announcements,” said Meister, “But [students] are getting a more enriched experience. The students are more proud of their work after seeing it shown around the school and community.”