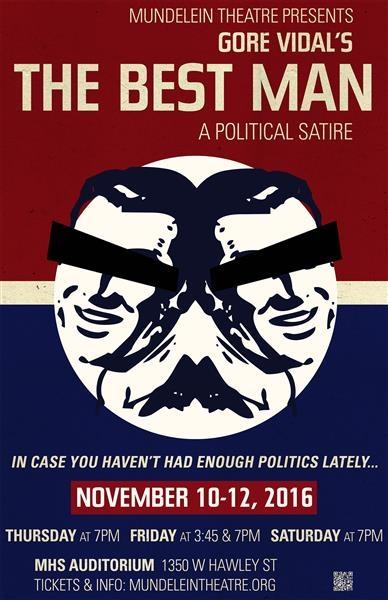 “The Best Man” by Gore Vidal is a political satire play set in the 1960s and was performed by the Mundelein Theater cast Nov. 10-12 as this year’s fall play.

The play was timely since the election results came in the same week, forcing the audience to compare the play to real life political events.

Q: What was most challenging about the play?

Paul: “The fact that I’m playing someone who is 83 years old and has a southern accent.”
Ferro: “Definitely the language– my character is very wordy and uses lots of different political words.”
Weiss: “It’s a really long play, and for some people, it’s a pretty boring topic; it’s about politics, so I think the most difficult part about it was to find ways to make it relatable and funny to students and people who weren’t around in that time period.”

Q: What was most fun about the play?

Paul: “I loved having a small tight family cast.”
Ferro: “It was that really digging deep into the characters and figuring out how they work in the play.”
Weiss: “Probably just the whole cast because we love each other, and we’ve all done other shows together, and most of us are juniors and seniors, so we have a really good bond.”

Q: What was the most memorable moment about the play?

Paul: “Probably putting the hair and makeup on for the first time because they sprayed my hair grey, and I had the wrinkles, and I looked in the mirror and was like ‘woah’.”
Ferro: “I used to pronounce deterrent as de-tear-ant until I was told how to actually pronounce it; it was a little embarrassing for a while.”
Weiss: “Probably just growing as an actor because this is the biggest role I’ve had.”

Q: How is this play different from other political satire plays?

Paul- “It’s so close to what is going on right now that it’s kind of scary, and I think it’s scary but also kind of cool. History tends to repeat itself, and this kind of slaps you in the face with that.”
Ferro- “It’s different since it’s not one-sided; it shows the ups and downs from both sides, not just the antagonist.”
Weiss: “This one is really funny and really well-written. Gore Vidal does a great job of subtly incorporating real people of the time into the play as fictional characters without totally insulting them but introduces them in a funny way.”

Q: How do you compare/contrast to your played character?

Paul: “I compare to it in the fact that I come into a room and everyone knows I’m there, and I’m friendly with everybody…. I contrast that I’m not from the South, and I’m not one to prod and poke.”
Ferro: “(We’re) similar in that (we’re) very morally upright, but (we) contrast because he is very wordy, like our speech patterns are very different.”
Weiss: “My character is very old schoolish, and she believes in very traditional morals, and I’m kind of like an open-minded, ‘forward-thinking person’… It was kind of a stretch to put myself in a role as an old-school person.”