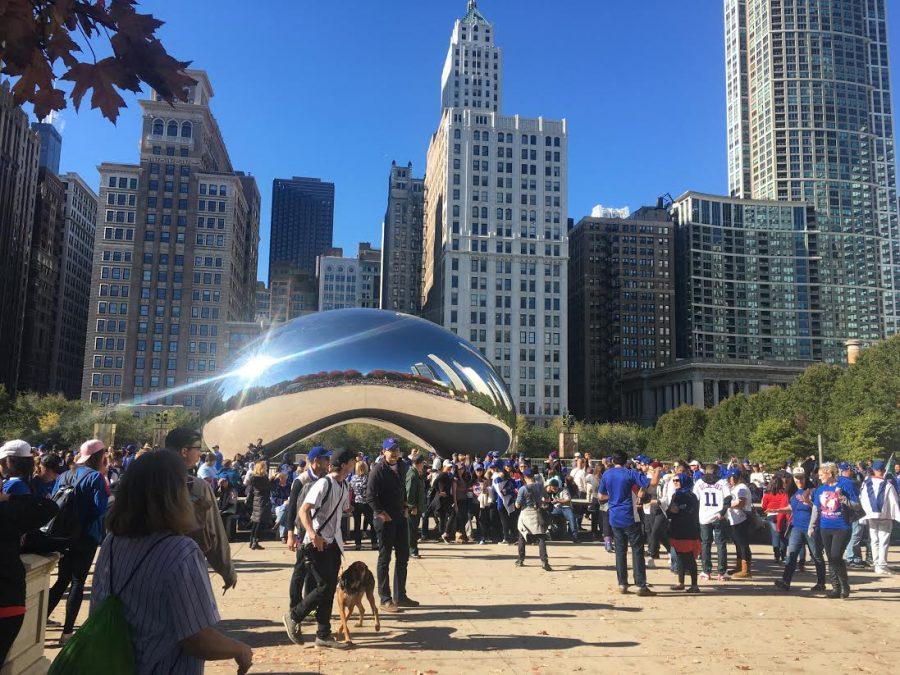 After the victory parade, fans gather around The Bean to take pictures. The Bean was closed off during the celebration, most likely in order to avoid damage.

After 108 years of goats, black cats, fielding errors, and being known as the “lovable losers,” the Chicago Cubs are World Champions.

In 1908, the last time the Cubs won it all, radio had not been invented, Henry Ford produced his first Model-T, and the Bears, Blackhawks and Bulls had not been created. 1908 Cubs manager Frank Chance probably never imagined that his championship would be the last until Joe Maddon in 2016. It also was the Cubs first trip to the Fall Classic since 1945 and eleventh in franchise history.

The meaning of a Cubs championship transcends generations. Millions of fans have died without seeing their team win a championship.

“It means so much for people with loved ones that have died and spent their entire lives rooting for a team that could never get it done for them,” said Senior Jimmy Corbin. “The Cubs prove that anything is possible.”

When owner Tom Ricketts hired President Theo Epstein from the Boston Red Sox in 2011, Theo created a five year rebuilding plan that put the team on track to be winners in 2016. Now with the additions of key players like Aroldis Chapman and Mike Montgomery, along with good drafting, the Cubs front office has fulfilled that goal.

“They brought in advanced statistics that could evaluate players like never before by projecting how they’d do with their new team, rather than going with the traditional ‘gut feeling’,” Senior Jacob Holton said.

Corbin added to this idea.

“The Cubs saw what the Blackhawks were doing and said ‘we need to do that.’ So the Cubs [found front office personnel who could win] and got people with a history of getting things done,” explained Corbin.

During moments of the World Series where the Cubs had their backs against the wall, players like Anthony Rizzo moved to motivate the team with his playing of “Rocky” movies in the clubhouse. Outfielder Jason Heyward also took a leadership role in the rain delay of game seven, encouraging his teammates to believe and never give up.

“[Game seven] was incredible because it wasn’t just a baseball game. It was millions of people who have watched the Cubs [their whole lives] coming together,” said Senior Kaitlyn Watkins.

In what is regarded as one of the greatest games in baseball history, game seven caused people to become a “glass case of emotion” as Anthony Rizzo described himself. While the Cubs got out of the gate early, Cleveland scored a pair of runs on relief pitcher Jon Lester’s wild pitch. With the Cubs four outs away from a victory and up 6-4, Indians centerfielder launched an Aroldis Chapman slider into the left field seats to tie the game at six, breaking hearts of Cubs fans who could taste victory.

“It wasn’t the best feeling [to watch the home run], [but] knowing that they [came back in other games], you couldn’t count this team out until the game was over,” said Holton.

Following the untimely rain delay and Heyward’s speech about never quitting, Kyle Schwarber lead off with a single in extra innings of a winner take all game. With runners of first and second, Ben Zobrist, a former college teammate of Spanish teacher Paul Franzen, doubled to give the Cubs a lead.

“[Zobrist] is the hardest working athlete I’ve ever known,” said Franzen. “He’s like the regular guy’s MVP. It’s great to see his hard work and character get recognized.”

Catcher Miguel Montero tacked on another run, which was critical because Cleveland managed to get the game back within one run in the bottom of the inning. With the Cubs suddenly one out away from a championship, Kris Bryant fielded a tough ground ball in the wet grass. Falling as he threw the ball to first with a big smile on his face, the Cubs broke all doubts and curses or whatever negative feelings people had and capped off one the greatest sports stories in American history.

The Cubs also inspired the city of Chicago. Everyone was captivated throughout the playoff run. Along with the popular #FlytheW, fans eagerly flocked to Wrigley Field to be apart of the moment. After the World Series fans covered the brick walls of the ballpark with thank you messages. Two days after becoming champions of the world, the city threw a parade with an estimated five million people in attendance, making it the seventh largest gathering of humans in world history.

“I felt the impact of the Cubs winning more at the parade than after the game because the history and meaning for so many people hit me, and I realized that I’m so lucky to experience this in high school with so many friends,” said Corbin who had a good spot at the parade on the corner of Michigan and Wacker.

Jacob Holton, who watched with Jimmy Corbin, said “There were fans in Arizona and Florida. Fans across Asia and South America. Generations of Cubs fans [were] there. It was an unbelievable atmosphere.”

The Cubs now are in a position for long-term success and more World Series appearances. Built around young players, the Cubs will be looking to fill some gaps like pitching to sustain their success. Due to ongoing renovations, the Cubs have dramatically increased their revenue, allowing them to sign more high profile players. Despite such high prospects of possible success in the future, nothing will be able to replace the feeling of when the Cubs first won the World Series after such a long drought.

To sum up what this year’s World Series will mean for the future of Cubs fans, Corbin said, “This is something that can never ever be replicated. The history is too great. There’s never another first time.”