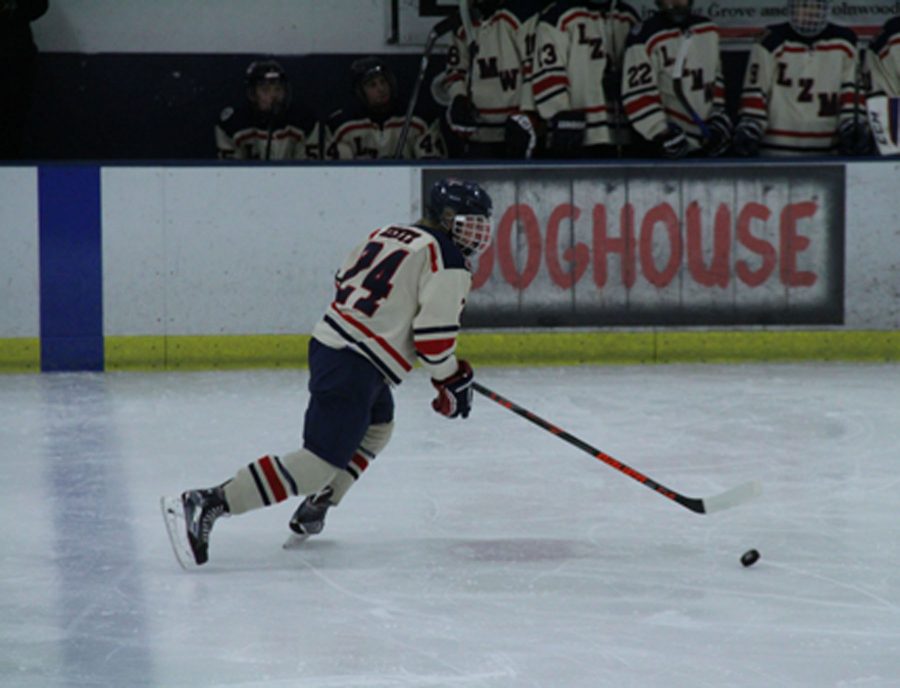 Zentz controls the puck at the blue line during a game against Lake Forest. LZMW won 5-4.

Zach Zentz has played for the LZMW (Lake Zurich, Mundelein and Wauconda) hockey team all four years of his high school career. Since his freshman year, he has played at the varsity level and has been a catalyst for the excitement and success that the team has had in recent years.

This season, Zentz was named the team’s assistant captain while friend and teammate Brett Parola, senior, was nominated captain. Check out Zentz’s hopes and expectations for the season below:

Q:  How and when were you named assistant captain for the upcoming season?

A: “It was kind of a team vote, but our coach had the most say. The nominations happened at the beginning of the season.”

Q: What past success has the program had?

A: “We won the [division] championship last year, and the year before, we won the division as well.”

Q: What are you looking forward to this season?

A:  “[I am looking forward to] hopefully winning another championship.”

Q: What are you looking for out of your senior hockey season?

A:  “I hope we win another championship for our divisions and continue to dominate every team we play but also have as much fun as possible because it could be my last year playing hockey competitively.”

Q: What is going to make this season special/ different?

A: “The rest of my team because they are the ones that I have to spend all the time with [this winter].”

Q: Do you hope to pursue hockey in college? If so, where, and if not, why?

A: “If I don’t play baseball somewhere, then I would like to play club hockey wherever I go academically.”

As of Dec. 5, the team has started this season undefeated with a record of 8-0. Follow Zentz, Parola and the rest of the team this season by attending games at the Glacier Ice Arena, where the team plays most of its home competitions.  The next home game is Dec. 7 @ Glacier against Cary-Grove High School.