Blackhawks Change Their Dynamics Along With Trades 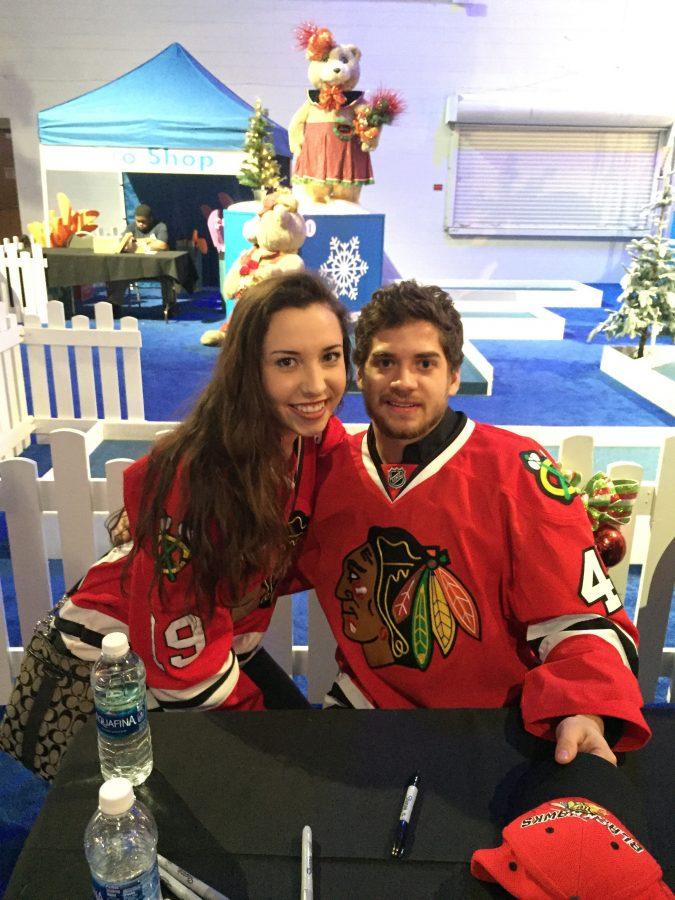 After a tough game 7 loss against the St. Louis Blues in the first round of the playoffs this past April, the Chicago Blackhawks knew they had to make some changes to come back next year even stronger. With several contracts ending and a few unproductive players, trade season approached the team quickly.

As early as April, the team signed on Tyler Motte, a key player from the University of Michigan, to a three-year contract, giving the team a solid rookie forward. In the same fashion, the team also signed on another rookie forward, Nick Schmaltz, from the University of North Dakota, who just recently won the 2016 NCAA Division I Men’s Hockey Championship, to a three-year contract.

Defenseman Gustav Forsling from Sweden and Forward Alexandre Fortin from Quebec were also both signed to three-year contracts and quickly became two young players to watch at training camp.

“[The rookies] are able to provide more competition on the ice, translating to greater success within the organization,” said Jacob Holton, senior. “They allow aging veterans to take on a new role and approach in hockey by mentoring tomorrow’s players.”

While all of these new additions to the team took place, another exciting acquisition came about for the team.

Brian Campbell, former member of the Florida Panthers, was signed onto the Blackhawks with a one-year contract during July. The defenseman was on the Blackhawks during its 2010 Stanley Cup win and told the Chicago Tribune, “It’s where my heart is, it’s where I want to play”, especially due to the fact that his wife and children continued to live in the western suburbs of Chicago while he played in Florida. Campbell took less money with the Blackhawks in order to be with the team he wanted to play with, which also worked out nicely for the team because of its need for stronger defensive play within the tight limits of the NHL’s salary cap.

Unfortunately, with all of the new acquisitions come several goodbyes to players within the franchise. One of the biggest, and most controversial, losses of the summer was the trade of Andrew Shaw to the Montreal Canadiens.

The trade was already one that made a splash in the hockey world by itself, but it was also done right at the beginning of the NHL Draft in front of a large audience, causing even more talk among fans and analysts.

The team acquired two second-round picks in the draft from the trade but in return lost a key player of the team for the last five years. Shaw had a position on the team that not only was important on the ice but also within the community.

“[Shaw] was a key role between the fans and the organization. When losing players like that, it [can be] rough because he’s a player the fans connect with,” explained Gigi Scibetta, junior.

Shaw was always known as the “agitator” of the team, the guy who was never afraid to get in another player’s face, whether that player be 6’9” Zdeno Chara from the Boston Bruins, or 5’9” Brendan Gallagher from the Montreal Canadiens. Whoever was going to fill Shaw’s position had big shoes to fill, and that person has turned out to be Ryan Hartman, 2013 first-round draft pick of the Blackhawks.

Hartman has had his opportunities on the team but has spent most of the past few seasons down on the Rockford Icehogs, the team’s AHL affiliate. This season, though, Hartman has proved himself as somebody who can score at the right times but also get in the way of the other team mentally and physically.

Another big trade of the offseason happened in June when Teuvo Teravainen and Bryan Bickell were both traded to the Carolina Hurricanes for draft picks.

Teravainen, a 2012 draft pick with a 2013-2014 season debut, was a member of the Blackhawks during the 2015 Stanley Cup Championship. After the trade of Brandon Saad, Teravainen took Saad’s label of the “young guy who would be with the Blackhawks for the rest of his career” and was expected to be one of the faces of the franchise once the staple members of the team retired.

But in order to get rid of Bickell, a member of the 2013 and 2015 cup-winning teams, the Blackhawks had to include Teravainen in the package as well. Though Bickell has proved his worth in previous seasons, he just was not proving to be the seasoned veteran that he should have been looking like, prompting the many moves to Rockford and then the trade, ultimately bringing Teravainen with him.

“[When I] read about [the Teravainen trade] I was really upset because Teravainen was one of my favorites on the team,” said Alexa Suaste, senior. “I was more upset hearing that they traded him, so they could keep Shaw but later ended up trading Shaw, too.”

Now, as the season has begun and the team has started up again, the dynamic of the team has had quite obvious changes.

The Blackhawks definitely still have the style they’ve had the past couple of years with more focus placed on shooting the puck than physical play, but the lines have greatly changed since the last season. The team has not yet reached a comfortable position where the lines are set in stone due to several injuries and trial-and-error runs, yet the team is still finding a way to produce and win games.

The defense of the team is what will need the most tweaking and the most work before postseason comes around, but with the strong goaltending of Corey Crawford and Scott Darling, the defense should suffice until playoffs as they work on improving.

Other than playing, the team has lots of changes regarding their image as well. Without the typically known Blackhawks players, such as Patrick Sharp, Saad, and now Shaw, the team is getting an overall new look with younger guys stepping up. The rookies are the ones who will eventually be the new faces of Chicago hockey, and that is becoming more and more obvious as the seasons go on. More of the veteran guys are being traded away due to the never-ending salary cap problems, and with those trades come changes that are seemingly inevitable.

At the same time, though, the changes bring excitement to the franchise and something fresh that fans can look forward to seeing every season. Hopefully these changes will bring forth another Stanley Cup Championship and make the new city-wide saying “4 in 8!”