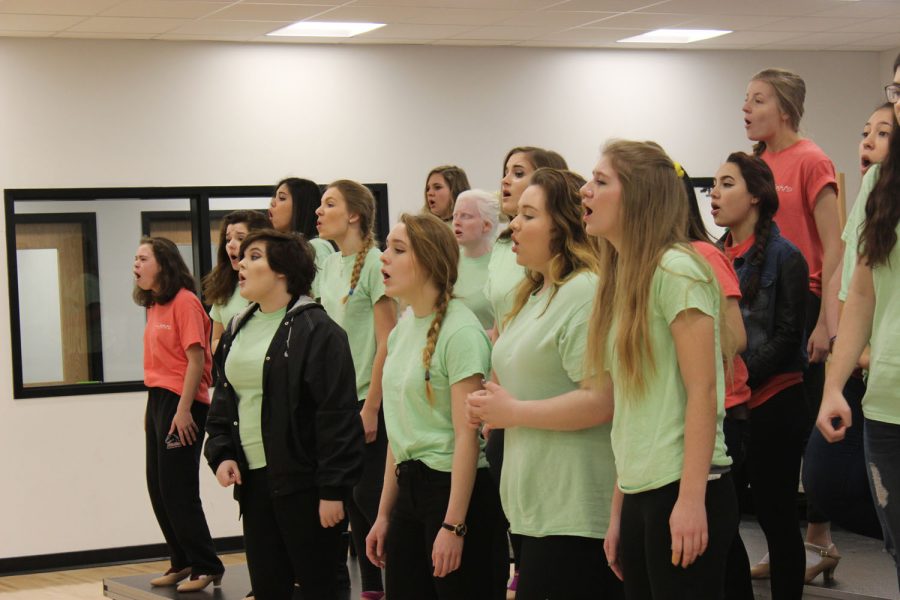 Students in the Lights all female show choir rehearsing for competition.

The road to the Show Choir competition season starts with the audition process. In the springtime, both students from the feeder middle schools and MHS attend auditions to sing a piece of music. They also learn and perform a dance routine.

“I was super nervous in the beginning [of the audition process]….The now alumni senior girls did a great job in creating a welcoming atmosphere,” said Kate Fladhammer, freshman. “They made sure we knew that we didn’t have to be 100 percent on it just as long as we smiled and worked our hardest.”

Toward the end of the school year, the audition results are posted online, and the next year of show choir begins.

The first step is for the two choral directors to pick a theme for the show. There are three Show Choirs: Lights, an all-female group; Sound FX, an all-male group; and Sound, a co-ed group. Each group has a different theme.

Stevee Bellas, the choral director for Lights, explained that when she decides on a theme, it starts with an idea of music that she thinks would fit the incoming group well.

This year’s theme for Lights is “The Elements”, which features hits, such as “Set Fire to the Rain” and “Skyfall” by Adele and “Bottom of the River” by Delta Rae– songs that have heavier themes.

Though some of Bellas’s choices for the music were to showcase the talented soloists within the group, others like “Bottom of the River”, have a strong percussion side that would also complement the students who play behind the scenes in the band called Noise.

“The role of Noise Combo is to be an accompaniment to the singers,” said Noise and Band Director Andy Sturgeon. “Noise is different than regular concert or jazz band because the sound is taking a roll in the show, not the lead.”

Unlike the Show Choir, Noise does not require an audition. If there is ever an issue where there are too many people who want to play the same instrument, “Sturgeon does a good job in attempts to make sure everyone gets a chance to play,” said senior Noise member Jessica Faulkner.

Noise practices begin in the fall, and they meet about once a week for about two hours and then members practice on their own.

Though Noise practice begins in the fall and only meets once a week, Show Choir starts in the summer.

For one week, students meet for a “Show Choir Boot Camp” where everyone gets to know each other and learns the basics of Show Choir.

“Show Choir Boot Camp is fun because we all get to know each other and begin to start to create a family-like atmosphere where everyone feels comfortable with each other,” said Alexandra Polyakov, senior.

When the school year begins, Show Choir takes every other day during an assigned class period to practice, and then each Show Choir meets for an additional practice about once a week for another hour. Some nights, though, may be longer for those in multiple show choirs.

Aside from the countless hours of practice, students also have to fundraise to offset the travel costs during the competition season. Costs potentially even include hotel rooms for when students must travel for competition.

“We are really lucky that our Show Choir is curricular, so we get course funding that we use toward some expenses,” said Bellas, “But having extra support [from fundraising] helps push the program further to what we’re looking for.”

The first fundraiser of the year is the selling of cheesecakes in the fall where students strive to raise money for their personal expenses for Show Choir and the overall Show Choir program.

“The cheesecake fundraiser is the most helpful for me because a lot of people love cheesecake, so you get lots of people buying,” said Chinedu Ebube, senior member of Sound FX and Sound.

The last fundraiser is called Spotlight, which is the program’s biggest annual fundraiser where they raise around $10,000.

“[Spotlight] is the big premier of the whole show for all three Show Choirs,” said Bellas. “They’re all in their costumes; the band [Noise] is playing with them. It’s the [year’s] big reveal.”

The students sell raffle tickets for prizes that have been donated by local businesses, and the grand prize this year was a pair of tickets to see the hit Broadway musical “Hamilton”.

“The Hamilton tickets helped boost our ticket sales this year and also the bribing of friends with free dessert after the show,” said Ebube. “Spotlight is a great concert because it kicks off our competition season and pumps everyone up.”

Spotlight is also the only event where tickets are sold for admission but dessert is provided.

After the countless hours of practice, fundraising and connecting as a family, February arrives, which is when the choirs show off all their hard work during multiple competitions.

“The best part about competition season is getting to perform for others and to also watch other show choirs. Even though it’s a competition, all the show choirs are supportive of each other. If another show choir liked what they saw us do, they say something about it and vice versa,” said Thomas Ferro, senior member of Sound FX and Sound.

Along with the Show Choir, Noise also travels to the competitions, which can add “a lot of dynamic changes that the band has to work with so that they are complimenting the singers,” said Sturgeon.

Students within Noise also agree with the difficulties that come along with accompanying a choir; however, they believe all the practice prepares them for competition.

“It’s difficult putting the band with the choir. At the end of the day, we’re proud of what we’ve accomplished,” said Faulkner. “We listen to what the judges say and work to better ourselves for the next performance.”

The most difficult part of competition season is getting back results from the judges. To prepare for these results, the directors tell the students of the band and the choirs to take their comments with a grain of salt—sometimes their comments will be helpful; other times their preferred style just didn’t match with the style of the choir.

“It’s difficult to have someone judge your art…sometimes you’ll get comments from judges, and it’s clear that they don’t have the same style as you do,” said Bellas. “Teaching this to the kids is really important. This is an art form, and [they] should be so proud of what [they’ve] accomplished. Yes, [they’re] in a world where… their art form [is] judged by someone, but what [the judges] think doesn’t matter as long as [the students] are proud of what they’ve accomplished.”