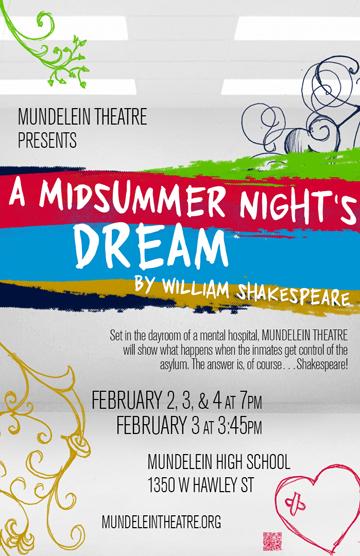 “Midsummer Night’s Dream” may not be the go-to Shakespeare production in everyone’s mind, but the twisting plot points and character development bring this play to a level deeper than anyone may expect.

The play begins with Theseus, duke of Athens, preparing for his marriage to Hippolyta, queen of the Amazons. Egeus, an Athenian nobleman, marches into Theseus’s court with his daughter, Hermia, and two men, Demetrius and Lysander. Egeus wishes Hermia to marry Demetrius, but Hermia is in love with Lysander and refuses.

Theseus warns her that resisting her father’s wishes will result in her being sent to a convent or possibly executed. Hermia and Lysander plan to escape and marry. They only tell Helena, Hermia’s friend, who was once engaged to Demetrius and still loves him even though he left her after meeting Hermia.

Hoping to regain his love, Helena tells Demetrius of the planned marriage. Demetrius treks into the woods to find Hermia and Lysander, Helena behind him.

Mundelein Theatre is known for its undertaking of challenging pieces in the world of theatre, and this upcoming winter production is no different.

“It is not unusual to take Shakespeare’s plays out of their original settings and place them in different eras and time periods. Our concept has the patients at a psychiatric hospital performing the play after most of the staff of the hospital has gone home for the evening,” said Jonathan Meier, theatre director.

Meier added that the modern twist will intrigue MHS students more than a simple Shakespeare production might.

“I think placing the play in a modern-day hospital setting gives the play additional poignancy,” said Meier. “The students took the characteristics that they developed when analyzing their Midsummer characters and used that information to create their hospital characters. It was a really enlightening process.”

Senior Claire Bullington plays the role of Hippolyta, Theseus’s bride-to-be, and is in her first Mundelein Theatre production.

“In order to prepare for it, I had to really understand the position she was in. Hippolyta had just been won in war. She comes from an all-female society, where she was the leader. Now, she has to forgo her power to Theseus, the man who won her,” said Bullington, who sees the style of Shakespeare as a good challenge for her abilities.

Bullington cited Hippolyta’s internal motivation as the most interesting and difficult portion of her characterization.

“I had to understand both how someone would feel being ripped away from something they knew so well and also had to take into consideration that maybe she kind of liked Theseus but can’t show it. It’s an internal struggle for my character,” she said.

Adding a special twist to the production has brought a lot of interest to the cast, many of whom have never interpreted a Shakespeare play in that situation before.

“The most interesting part is definitely the fact that it’s set in a mental hospital,” said Senior Payton Cousins, who plays the role of Helena. “It’s so interesting to see how the different characters in the mental hospital match the characters they play in Midsummer. This show is so unique, not only because it is Shakespeare, but also because it is taking a pretty common play and putting a cool spin on it.”

The plot of the play is laced with magic, romance, confusion and Shakespeare’s signature, beautiful dialect.  The production opens Feb. 2 at 7 p.m. in the school auditorium and runs through Feb. 4.