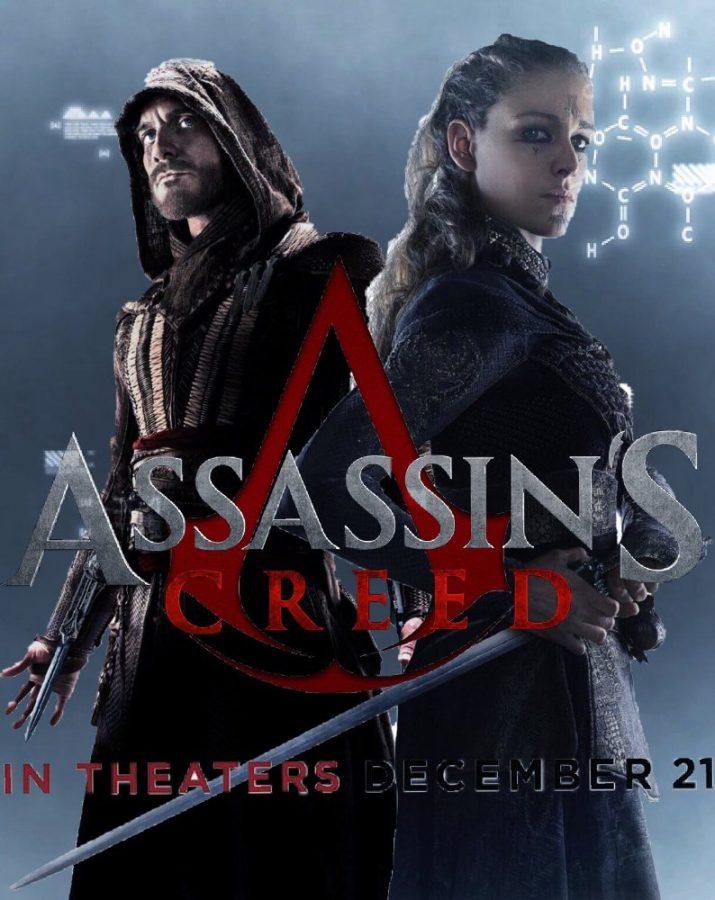 It depicts the centuries-old struggle between the Assassins, who fight for peace with free will, and the Templars, who desire peace through control. It falls under the historical fiction category as the game’s story line is mixed with real-world historical events and figures.

The film was directed by Justin Kurzel, who has also directed 2015’s “Macbeth”, and stars Michael Fassbender (“Macbeth”, “Steve Jobs”, “X-Men: Days of Future Past”)  as Cal Lynch, the descendant of a member of a Spanish secret society of assassins, and Marie Cotillard (“The Dark Knight Rises”, “Macbeth”), as Sophia Rikkin, a scientist and Templar looking for a sacred artifact last in the possession of Cal’s ancestor, Aguilar.  She seeks the artifact by unlocking Cal’s memory via a revolutionary machine.

“Violence is a disease — like cancer,” says Sofia, whose elaborate plan is to send Cal back into time (through his ancestors’ memories) to search for the Apple of Eden, which has the power to return Man to his original, blissfully ignorant state. The reason Cal agrees, and why he eventually rebels, is never satisfactorily explained. The only reward for staying in our seats is enjoyable and well-shot gymnastics across the rooftops of 15th century Spain.

The film premiered on Dec. 21, and mixed reviews poured in from critics and moviegoers alike. The average rating on Rotten Tomatoes is around 3.9 out of 10 and has a 17 percent freshness rating.

While the movie was inspired by the game, the game also took inspiration from the novel “Alamut” by the Slovenian writer Vladimir Bartol as well as concepts from the Prince of Persia series.

The gaming franchise began in 2007 with the release of “Assassin’s Creed”. The main video game series consists of nine games that were released on PlayStation and Xbox consoles as well as on the Wii U, Microsoft Windows and several other handheld platforms.

Personally, as someone who has experienced playing the “Assassin’s Creed” games, the film captures the spirit and intensity of the games, yet falls flat when it comes to the acting and background scenes.

The film is targeted toward a niche audience who has background knowledge of the game series and story. If a person who has never set foot in the “Assassin’s Creed” universe were to sit down and view this film, he or she would be utterly lost within 30 minutes.

The fight scenes are akin to those in the games, with vicious attacks and rudimentary weaponry. The gore in this movie is considerably less than the game, given its PG-13 rating, yet the concepts may be disturbing for younger viewers. For example, a young Cal finds his mother murdered by his father about 10 minutes in.

Video game adaptations into movies are extremely difficult to bring into mainstream movie success. Directors must carefully consider retaining the importance of the franchise that fans remember fondly, while creating a medium that will appeal to an audience with no previous experience of the ideas and concepts of the game.

“Assassin’s Creed” is a film for fans of the “Assassin’s Creed” games, not your average American family. It acts like a two hour game cut-scene that has incredible cinematography yet lackluster performances from A-list celebrities.