With Last Season in the Dust, MHS Baseball has Every Reason to Swing for the Fences Again 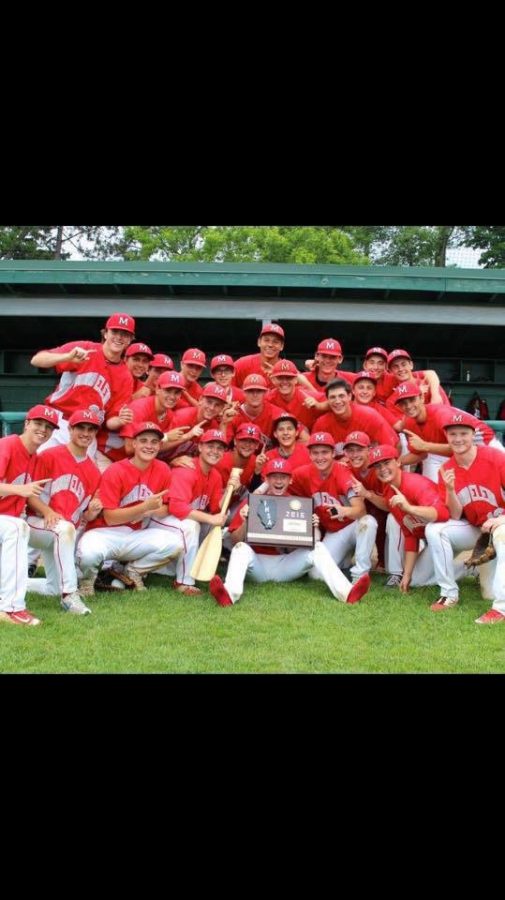 The baseball team celebrates defeating Warren in the Sectional Championship last May at Stevenson High School.

Last season was one of the most successful seasons the MHS baseball team has ever had. Now that achieving a 20-win season is almost automatic with Coach Todd Parola, the baseball team has no reason not to set its goals for this season even higher.

The baseball team proved its ability to achieve big accomplishments last season when it went all the way to the state finals but fell to Providence Catholic Celtics 10-3.

Although the score may not demonstrate the good game that it was, this game was fun to watch from start to finish with the 3-run first inning by MHS and the throw from right field to third that made SportsCenter’s Top 10.

“We played our best baseball at the most important time last year,” said Coach Parola.

Furthermore, the baseball team only had five players graduate, so there are not as many big holes to fill this season.

The team lost Zach Zagula, who was third baseman and designated hitter, to Adrian College in Michigan. Reid Rubio, who was catcher, now plays at University of Minnesota-Duluth. In fact, the baseball team’s biggest loss came in the form of Reese Dolan, who was the right fielder throughout the playoffs and who could also pitch. He now plays at SIU-Carbondale.

While graduating players can lead to struggles in the upcoming season, Brendan Murphy, senior, is optimistic it won’t.

“[Last season] was a really cool experience, and it’s good we have 19 returning players from last year’s team,” said Murphy.

Murphy, who committed to Arizona State this offseason, also believes consistency in all stages of the game will lead to success this season, as they hope to repeat their previous season’s success.

“We were consistent. We made plays; we hit,” said Murphy about last season.

While making it to the state championship is what every baseball team aims for, it becomes feasible for only some. These MHS players, as they proved last year, do believe they can repeat if a couple aspects mesh together and stay dominant.

“I think our team will be just as strong, maybe even stronger, since we still have our pitching intact,” said Brett Parola, senior.

The players believe that the MHS pitchers have a good combination of pitches they can pitch for strikes, along with thick skin and preparation when it comes to pressure situations or long innings.

However, with sports teams, pro and college, in the past that were supposed to be dominant, injuries have sometimes completely derailed these teams with their seasons going from one of great promise to one of limping across the finish line.

Many players believe the biggest key this year is staying healthy.

“If everyone stays healthy, I think we can make a run again because our pitching is one of the best staffs in the state,” said Brett Parola.

As of right now, as the baseball team approaches the end of its offseason and begins actual practices, Coach Parola may face some hardships when announcing the opening day lineup that he hopes will propel MHS to another state championship game.

“We have a lot of question marks, a lot of guys fighting for spots, still a lot of things to be determined,” said Coach Parola. “I hope by April or May we can get some answers and some guys solidifying spots, but right now it’s still a work in progress.”