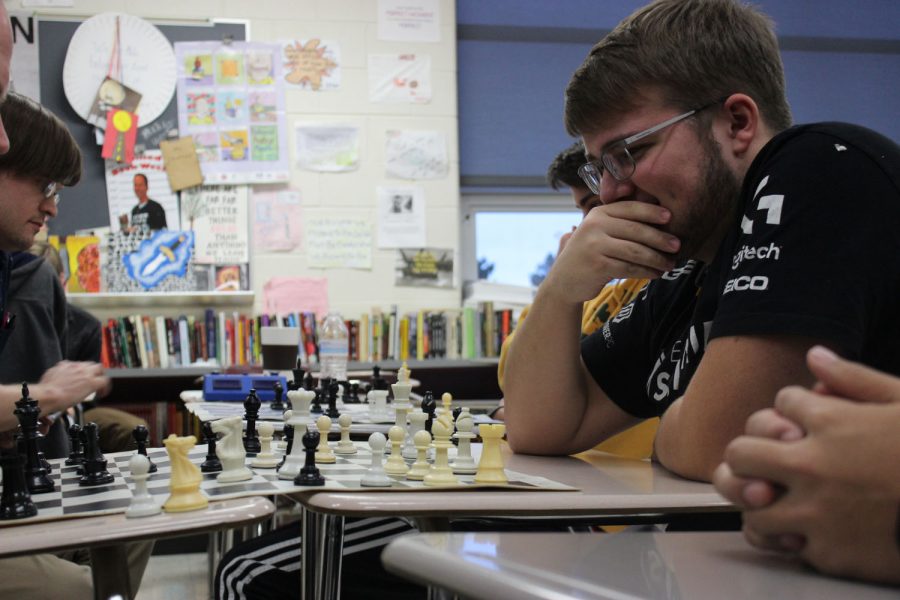 Senior Kobi Krehmeyer plans his next move at chess club.

Puzzles, patterns, geometry and more– chess club has become a haven for lovers of the game.

For some, the club allows for intellectual competition rather than an athletic one, as members are given the opportunity to play against each other as well as against other schools at tournaments.

“People think it’s going to be quiet and really serious, [but] it’s like a circus,” said Head Coach and English Teacher Jim Drier. “We mess with one another. We have a lot of fun. We compete, and everyone wants to do well.”

Drier has been the main sponsor for the club off and on for about ten years, but his love for the game stemmed from his son.

“When my own child was 5, he wanted to play chess. I taught him how to play. At the time, I wasn’t a good player at all, and so, he and I learned together,” said Drier. “He eventually got way better than me, but I fell in love with the game.”

Drier enjoys the puzzle aspect of chess, while Assistant Coach and Instructional Assistant Dan Warren enjoys the connection to others it gives him.

“You go to events, and everybody has something in common. I’ve been influenced by being a part of something,” said Warren.

Chess doesn’t always seem like a social sport; however, members enjoy the community it gives them.

Senior Daniel Morales said, “You can learn stuff from your friends in chess club that you can use against other schools.”

Members like Morales and Freshman Michael Such also use chess.com to practice against people around the world in order to improve their skills. There are other chess practice websites, but chess.com has been a favorite to learn new openings in the game.

Within the tournament world, chess matches can take roughly two hours; due to this, the game is good at teaching patience and critical-thinking skills. Chess is not a game that can be picked up overnight, but people of all ages can enjoy playing.

“It’s a cool thing because age is not so much of a factor. It’s talent, practice and knowledge,” said Warren. “I’ve played against 7-year-olds and lost in tournaments.”

Anyone can improve their skill through practice, effort and a willingness to understand the game. Warren learned by reading books his brother sent him while Such learned through his father’s teachings.

“The first game I ever played was against my dad, and he destroyed me. I made all the worst moves possible because I didn’t know anything about the game,” said Such.

Such’s motivation to learn the game stemmed from this because he saw it as a challenge to enhance his abilities.

Not everyone has the same goal for chess. Some just want to have fun while others want to work on their puzzle and competition skills. It doesn’t matter how much or little someone may know about chess; everyone is welcome to join chess club. Chess club meets Thursdays in A109.