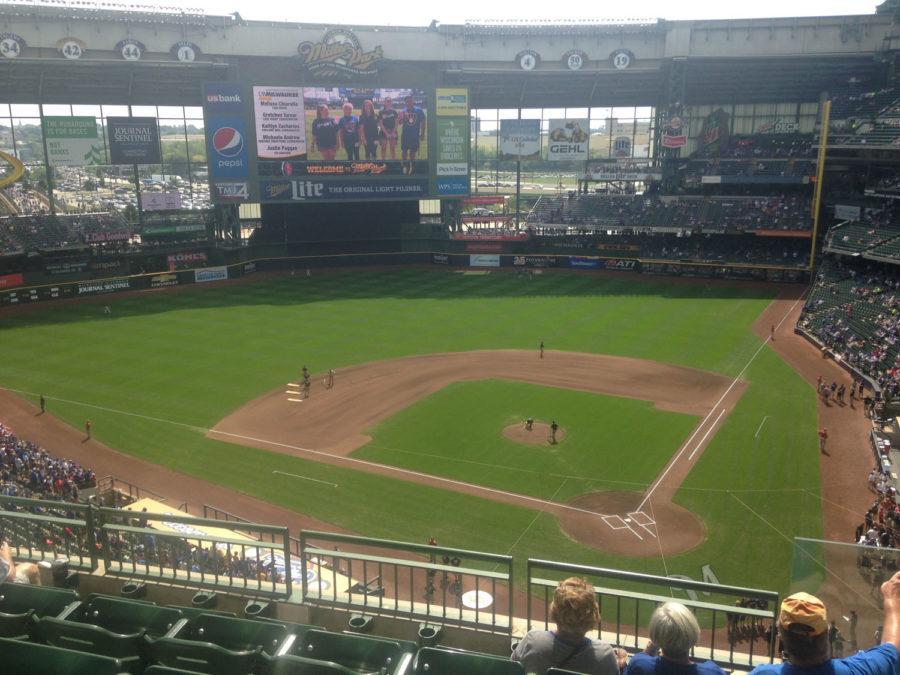 Miller Park in Milwaukee, prior to the Cubs taking on the Brewers on Labor Day 2016.

After one of the greatest World Series of all time, the 2017 Major League Baseball season is expected to excite fans once again. While the Chicago Cubs title drought is no longer something to watch for, the Cleveland Indians now have the longest drought of 68 years and have a good chance to break it this season.

The most striking offseason moves were how good teams got stronger. The St. Louis Cardinals opened the wallet to sign Dexter Fowler, adding a much needed veteran outfielder. For the Boston Red Sox, its pitching staff received a huge upgrade in Chris Sale but did need to pay a heavy price to the White Sox in the form of a number of top prospects.

“Edwin Encarnacion to the Indians [was the biggest move of the offseason] because Cleveland was already a complete team, and the small change [at first base] from [Mike] Napoli to Encarnacion makes them the favorite,” said Senior Jacob Holton, an aspiring MLB general manager.

The New York Yankees resigned Aroldis Chapman, which will help keep them competitive this season. To replace Chapman, the Cubs signed Wade Davis but lost Jason Hammel and Travis Wood to the Kansas City Royals.

In addition to notable free agent signings, the offseason included a change to the rules that eliminates intentional walks. The rule will mirror high school where a manager can verbally communicate that they are going to walk the hitter. According to Holton, he believes the rule will just take some strategy away from the game.

Former Mundelein star pitcher Ryan Borucki, who was drafted in 2012, is currently ranked as the number 17 prospect by MLB.com for the Toronto Blue Jays. Borucki, who is known for his lively fastball, has been suffering from arm injuries since a partially torn elbow ligament during his high school senior year that eventually required Tommy John surgery.

“Ryan was a competitor. It was hard on him when he couldn’t help his team,” said Baseball Coach Todd Parola.

Despite missing time at various points because of his arm, Borucki had a very solid 2016 season for the Lansing Lugnuts, the Single A affiliate for the Jays. Borucki posted a 10-4 record with a 2.41 ERA. Because of that, the Jays added him to its 40-man roster, which included an invite to spring training in Dunedin, Fla. Borucki has very high potential and will be one of the more exciting prospects to keep tabs on around the Major Leagues. Coach Parola said that late 2018 could be a goal for a big league taste.

“He was dominate in his few senior outings, and if he stays healthy, he has a chance to do something that hasn’t been done around here in a long time,” Coach Parola said.

The Cubs have every reason to believe they can repeat as World Champions. The core of young players remains intact, and the team did not lose any irreplaceable pieces in the offseason. Manager Joe Maddon can expect to have the same problem as last year: too many good players and only eight positions to fill.

While the Cubs did sign Jon Jay to replace Dexter Fowler in center field, he may not be the strongest player the Cubs could put in its lineup. Kyle Schwarber will return this season and will likely spend most of it in left field. At second base, Maddon needs to choose between the electric Javier Baez and World Series MVP Ben Zobrist, two players who should be in the lineup at all times. The problem could be solved by moving Zobrist to right field and Jason Heyward to center; however, the Cubs do want to get rookie Albert Almora Jr. playing time in center. Maddon will likely end up changing the line up each day based on the opposing pitcher.

Senior Jacob Holton offered a different approach: “If you decide to keep Schwarber in left and aren’t sure with Heyward in right, you have to experiment with Baez in center. Schwarber probably will catch once a week, and Heyward will stay in right no matter what.”

With the departure of Hammel, the Cubs now have a fifth starter spot open. They signed Brett Anderson, who is expected to compete for the role; however, his career has not demonstrated the quality that made the Cubs so dominant last season. Reliever Mike Montgomery is also expected to compete and is likely the favorite because of his stronger pitching abilities. But like with his hitters, Maddon will probably not keep the same person in the rotation all year and could even have both in the rotation during the summer with a six-man rotation.

Even with the small line up questions, the Cubs really have nothing to worry about. As long as everyone stays healthy, they will run away with the division once again with a record of 101-61.

Don’t expect anything from the White Sox this season. In the first year of rebuilding, General Manager Rick Hahn is more likely to trade good players like Jose Quintana. However, new manager Rick Renteria is more than capable of leading a team through a rebuilding, as he did with the Cubs. Renteria would even be a good choice to lead the team to the playoffs in the future, as the team is not far off from being competitive with its new prospects.

Holton said, “By the end of the year, we’ll know [how close they are]. It’s too soon to know, but a lot of their prospects are already close.”

Offensively, the Sox have a very capable team. However, as was evident last season, when the top guys like Todd Frazier and Jose Abreu do not perform to the standards, the team will struggle. If the bats produce, the season and the rebuilding process won’t be as painful.

“They still have a good core of veterans, so they won’t be as bad as people think. They also have a lot of young guys,” explained Holton.

Sox fans also have young shortstop Tim Anderson to watch. Anderson projects to be a solid answer at that position and a key piece of the future young core of the team. Last season Anderson struck out 117 times in 99 games, so if Anderson is to become that piece the Sox need, he will need to cut that number down.

Sox fans don’t have many options other than to wait and trust Hahn’s rebuilding process. As a team that struggles with very low attendance numbers, the Sox will need its fans to show better support, which will help increase revenue and allow the big free agent signings fans want. For 2017, Sox fans will need to suffer through a 68-95 season.

Among young players to watch this season are Josh Bell of the Pittsburgh Pirates and Dansby Swanson of the Atlanta Braves.

Bell, who immediately produced in his first two professional at bats with five RBIs, underwent offseason knee surgery, which could hold him back at the start of the season.

Holton said, “Bell is quick and not as big as other first basemen. He’s got a quick bat and opposite field power and could be one of the few guys who walks more than he strikes out.”

While not expected to be as much of an impact player as other prospects like Kris Bryant were, Bell’s 2017 will tell a lot about his future.

Swanson, on the other hand, is a former first round draft pick in 2015 and has the potential to be the next start for the Braves, a team that needs a star player.

“Swanson is the poster boy for Atlanta baseball and the biggest guy they’ve had since Chipper Jones,” said Holton.

The infielder hit .302 in his call up from AA last season, so there is no reason to believe he will struggle in his first full professional season. In fact, Swanson is the favorite to win Rookie of the Year and has the potential to help propel the Braves toward a more successful future.

Another player who could decide the direction of the team is Jason Heyward. Heyward did not live up to his massive contract last season, rarely producing in a big situation. After much diligence to change his swing this offseason, all eyes in Chicago will be on Heyward. If he can perform like he did early in his career, the Cubs will fill the one hole in its lineup from last season.

The American League playoffs will feature teams that are relatively new to October. The Red Sox, Indians and Seattle Mariners will all win their divisions, with the Wild Card going to the Blue Jays and Houston Astros. But it is worth noting that the Yankees and Royals will be very competitive. Despite some unfamiliar faces, the Indians will be back in the World Series after defeating the Boston in the league championship.
In the National League, fans will be hearing names like Clayton Kershaw, Bryce Harper and Ben Zobrist again as Washington Nationals, Cubs and Los Angeles Dodgers will all repeat as division winners. In the Wild Card, the San Francisco Giants will fall short of the Dodgers once again and have to settle for a one game playoff against the Cardinals. It will be nail biting TV during all match ups, but the Cubs will once again prevail over the Dodgers for a trip to the Fall Classic.

“The Dodgers brought back guys they needed and upgraded at [positions]. Players like Corey Seager, Julio Urias and Cody Bellinger will make them better than the Giants,” Holton predicted.

In the World Series, Cleveland will finally break its long drought, and this time the team will win the rematch by beating the Cubs in six games. Repeating as World Champions is extremely hard and so is repeating as league champions, so neither team’s season will be a failure.

Senior Jack Neumann disagreed, saying, “The Cubs [will] make it again, and if they do, they are going to play against the Red Sox because their pitching staff is stacked.”

“The Cubs will win again over the Astros because [the Cubs] are the same team as last year,” he said.

The leadership of Terry Francona will be the difference, however, as the Indians’ will to win will overcome the passion of the Cubs and conclude an exciting MLB season.