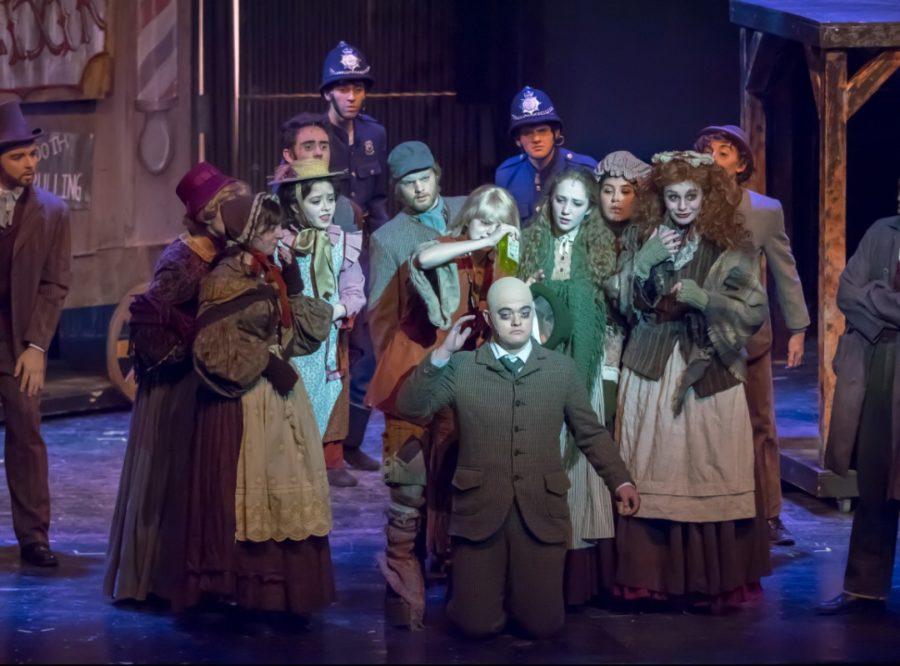 Senior Thomas Ferro, center, during "Pirellis Miracle Elixir" when Toby was trying to show that the miracle elixir could grow hair back.

The hit horror musical sets the scene in 19th century England by telling the tale of a barber named Benjamin Barker who was exiled for 15 years for a crime he did not commit. Upon his return, Barker chooses a new identity, Sweeney Todd, and seeks revenge on the judge who got him banished in the first place. Scheming with the local baker, Miss Lovett, he opens a barber shop above her pie shop and initiates a plan to bring vengeance on those who wronged him and made him lose his wife and daughter.

On Jan. 5-7, Senior Thomas Ferro performed in the All-State production of “Sweeney Todd: The Demon Barber of Fleet Street” at the Krannert Center located on the University of Illinois campus. Ferro shared what it was like being a part of an All-State production for a second year in a row.

All photos courtesy of Thomas Ferro.

Q: For those who don’t know, what is All-State theatre?

A: All-State is kind of like the “mainstage” production at the Illinois High School Theatre Festival. They call it “All-State” because they audition kids from all over the state for one production. The entire cast, crew and orchestra are made up of high school students all over the state. This year, cast-wise, they auditioned 264 students from all over, and they casted 35.

Q: How does it feel making All-State for a second year in a row, especially since only 35 were cast this year?

A: It’s an amazing feeling, especially because this year the show was “Sweeney Todd”, which is my favorite musical of all time…I also had such an incredible experience last year in “RENT”, so it was nice to know that I would be able to have that kind of experience again.

A: Both were absolutely incredible to be in. Last year [in “RENT”], the music was relatively easier, not because it wasn’t hard, but because Sweeney is incredibly difficult. [What made Sweeney more difficult] was the way the different parts were layered on top of each other and how many words there were. Also, you had to sing in an accent, so the diction was key to making sure the audience heard everything you sang, which made the singing even harder, believe it or not. There were also a lot of words to sing at a fast tempo, but once I got it, it was so much fun to sing! Also, this year I was an understudy for Sweeney, my all-time dream role, so I had a lot more work to do this year than last year. I not only had to learn my own ensemble stuff, songs, blocking and lines, [but Sweeney’s as well]. I never had to fill in for the actor, but I knew the part and could have performed it should I have needed to.

Q: What were some of your most memorable moments from Sweeney Todd?

A: Most of my memorable moments came from the friends I made through the production. One of my absolute favorite memories, though, was when we ran the show for the first time in front of an audience. When we finished, just the roar of the crowd we heard from the audience, it was such an amazing feeling because we all knew we had created something really special. It was so cool to see all of our hard work pay off. Another favorite memory of mine was when I got to play the asylum owner, Jonas Fogg. I had so much fun getting to be crazy on stage, and it was fun to be able to get shot on stage but not actually get shot. It was by far my favorite scene to do in the entire show.

Q: What were some challenges and rewards from being a part of such a production?

A: The main challenge of the production came from the lack of time we had to put it together. “Sweeney Todd” is such a difficult show, and putting it together in 20 rehearsals seemed almost impossible. The biggest reward, I think, was pulling it off. Another reward, for me at least, is all the friendships I made throughout the process. The people from this company were some of the most amazing people I’ve ever had the pleasure of working with, and I am happy that I got the chance to meet them.

Q: How is All-State different than any show you’ve done at MHS?

A: All-State is different for many reasons. For one thing, the people are different because everyone comes from different schools…. Also, because everyone is from all over Illinois, we can only rehearse one weekend each month leading up to the performance. Essentially, we rehearse three days a month from August to December, and then we have a tech-week in January, and then we perform the show. If you do the math, it adds up to about 20 rehearsals, including tech-week, so each rehearsal ranges from 8-12 hours long. The process is not incredibly different; it’s just done in a significantly shorter amount of time.

Q: Are there any other aspects of the production you would like to add?

A: The only thing I would add is that it’s by far my favorite show I’ve ever been a part of outside of Mundelein. The cast, crew and orchestra really became one huge family, and I made friendships that will last a lifetime. It was one of the most amazing experiences of my life, and I wish I could go back and do it all over again.

Q: Do you have any future plans within musical theatre?

A: I plan to major in musical theatre in college. I do not know exactly where yet since I am in the middle of auditioning for schools, but I am very excited to see where I end up.