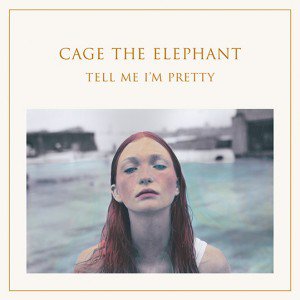 At the Grammy Awards this year, America’s Cage the Elephant won Best Rock Album for “Tell Me I’m Pretty”.

Recorded at Easy Eye Sound in Nashville, Tenn., with The Black Keys’ very own Dan Auerbach, the wistful group shaped “Tell Me I’m Pretty” into becoming the 59th annual Grammy’s Best Rock Album of the year.

“As far as people who are able to bring that raw, gritty sound, there’s not a lot of people out there that are doing that at the level that Dan does,” said lead vocalist Matt Schultz to a music blog, Filtr Say It. “He’s able to make records that feel classic … and at the same time don’t lose people who have a contemporary ear.”

The album focuses on some bleak subjects that Schultz wanted to make sure he included in the new album this time around.

Schultz sings of a past trauma in the song “Sweetie Little Jean”, which is about the murder of a girl who was a neighborhood friend.  She had been abducted and then killed when Schultz was 12.

He also includes “Punching’ Bag”, a song written about a woman who tries to get out of a physically abusive relationship.

With fuzzed out guitars setting a grimy kind of mood, each song sounds a bit classy yet nostalgic.

“I was battling a fit of depression at the time as well and didn’t have a lot of great perspective when we were recording it, so a lot of the emotion you’re hearing on the record is real,” said Schultz in an interview with Digital Trends about “How Are You True”, one of the album’s most woebegone songs.

In an interview with “Entertainment Weekly”, Schultz explains that he actually wrote “How Are You True” after meeting a young boy named True on an airplane flight back to Nashville (True’s own label was sending him back to rehab). Schultz was interested in talking to the young kid only to find out his heavy story.

Such emotionally moving songs helps explain the group’s win as Cage the Elephant was competing against Blink 182’s “California”, “Magma” by Gojira, “Death of a Bachelor” by Panic! At the Disco, and lastly “Weezer” by Weezer.

When accepting the award, guitarist Brad Shultz thanked God, the band’s family and those in the industry who helped get them to where they are now.

This album includes many tracks that were recorded with only one take. When Schultz said that he wanted to make an album more emotional and powerful, he really meant it, driving this one home with a first-ever Grammy award for the band.