Class Ranking Does Not Benefit Students 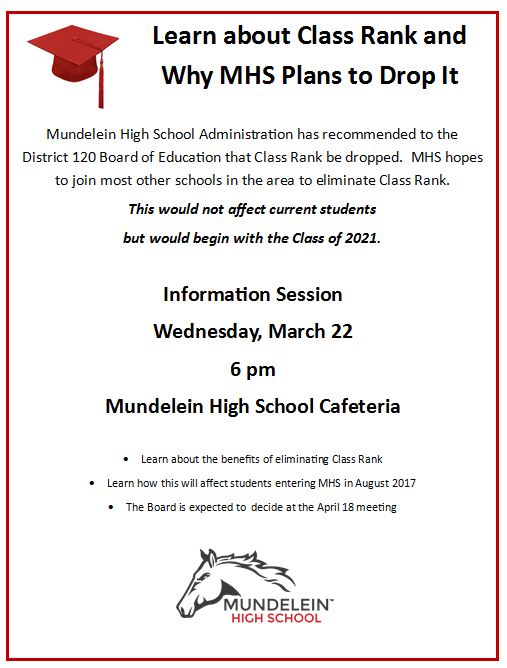 Class ranking, according to College Board, a not-for-profit organization related to higher education, is a “mathematical summary of a student’s academic record compared to those of other students in the class”. In other words, class ranking is a way to measure one’s academic achievements compared to others.

However, some students believe that class ranking and the idea of having to compete to be a certain number harms students more than it benefits them. A class ranking system that emphasizes comparison to peers, rather than mastery of content or skills, can undermine efforts to learn well.

Therefore, I question if class ranking at MHS truly helps students challenge themselves to be at the top of their class while also having a significant experience in the classroom.

Every student is different, so it is important to look at a student individually and study personal strengths that they hold rather than compare them to their peers in their class by academic achievement only.

According to a recent report by the National Association for College Admission Counseling (NACAC), more than half of all high schools no longer report student rankings, for there are other ways to evaluate a student that shows how they have challenged themselves or found personal success throughout the courses they have taken.

In some cases, class ranking is not as accurate as it is deemed to be. The College Board claims that “many admission officers (especially at selective private colleges) have begun to discount the accuracy and importance of class rank as a factor in evaluating students.”

Class ranking can lead to hard-working individuals being overlooked and does not take individual growth into account.

Instead of having class rank as an element in evaluating and admitting students into colleges, colleges focus more on SAT scores and narrow down on GPA of each student individually instead of comparatively. Therefore, it is unnecessary.

If schools were to only compare, let’s say, the student’s GPA to where an average student should normally be at, it would be more suitable. However, when you take two different kinds of students with different characteristics, it defeats the true meaning of what one’s best effort should look like.  It is important to be able to look at student capabilities and performances shown rather than constantly be comparing the student to his or her peers. Take individual growth or achievement into account only.

On the other hand, class ranking does seem to benefit some students. Those that are in the top 25 percent are eligible to apply to scholarships that colleges have in store for them. A good deal… for the top percent of students.

“Maybe if you’re in the middle it might encourage you a bit, but if you’re near the bottom, you might be dismayed and think, ‘What’s the point?’”, said Alex Frumkin, senior.

The National Association of Secondary School Principals has created multiple concepts that schools should be held accountable for. One idea is that “schools should hold high expectations for all students and should promote academic excellence for each and every student, not just a select few.”

And the top 25 percent in class rank should not be the few.

Class rank primarily is direct competition among students. However, students should be able to learn without limits and set goals that will challenge them in the classroom. They could be missing out on classes that will help them in the long run and on important coursework that may be meaningful to their future.

Junior Steven Miritello believes that class rank has its pros and cons; however, in the end, it will not benefit him in the long run.

“The pro is that you can kind of compare yourself to see where you stand within your class, but also the con is that it perpetuates that idea that everybody’s comparing each other, and it causes stress and anxiety for everybody to try to be number one or number two or in the top 40 percent to get into a big college, and it doesn’t necessarily help in the long run,” said Miritello.

A solution to this harming incentive is to get rid of it.

Head of Guidance Department Tom Buenik said he believes that if MHS in particular were to get rid of class ranking, it would:

There are several other ways to help take a closer look into students who may not be in the top percentile, though, who still carry important strengths in other areas in the classroom. Measuring growth through students’ classroom experience would keep the learning and idea to do the best you can meaningful.

Not only does it show the characteristics of a student taking whatever level class he or she has decided to choose, but it shows what he or she is also capable of learning in the chosen level class (regulars, honors or AP).

“I think in moments it’s nice to see where you are out of your whole class, but at the same time, what it all comes down to is how much you care about how you’re doing,” said Junior Christine So.

Overall, though, class ranking is unnecessary and does not truly depict hard work; therefore, MHS should get rid of this sort of evaluation system in order to encourage individual growth instead of peer comparison.