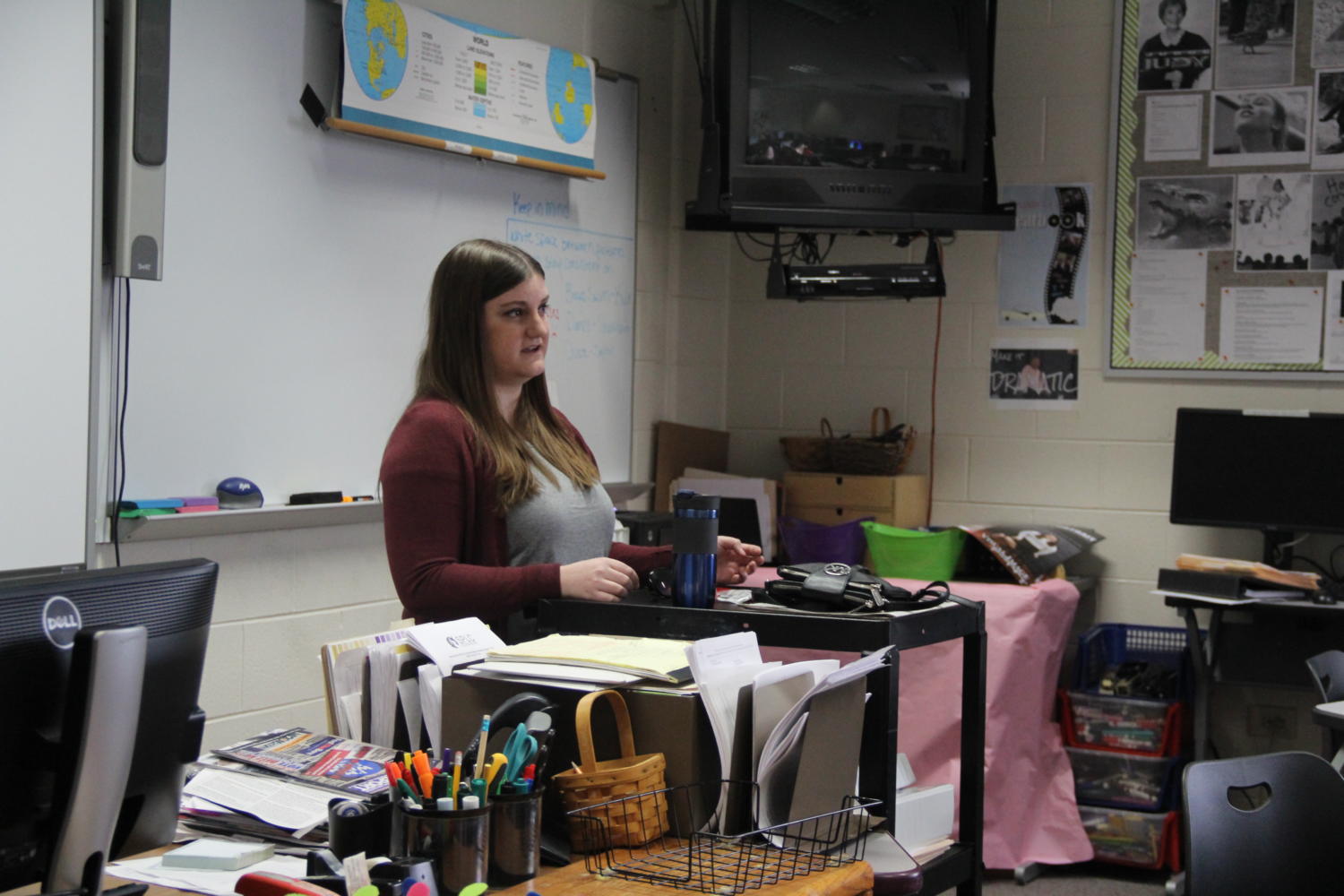 For many seniors in the News in the 21st Century class, the prospect of studying journalism post-high school has been considered at one point in their high school career. The field is challenging to make a living in and is coming under heavy scrutiny by the United States government but requires a wide-range of skills and expertise from photography to sports knowledge.

In order to help aspiring journalists realize what opportunities are in that field, 2011 MHS alum Jordyn Reiland took time on Friday, April 7, during first period to visit the class to speak about her job as a local courthouse reporter.

Senior Alex Heraty noted Reiland’s preparation for her speech: “She came prepared with enough to say to keep her audience engaged.”

Reiland stated that preparation is key for communication in journalism and was eager to pass that advice on to students at MHS.

“The most important thing you learn [taking high school journalism] is how to communicate effectively,” she said.

Reiland currently works as a courthouse reporter for the Northwest Herald, whose distribution reaches McHenry County and northern Kane County. Aside from covering court cases for the Herald, she’s written a variety of pieces, including coverage of the Chicago Cubs World Series parade.

Reiland began her journey as a sports-focused editor-in-chief for The Mustang.

“It’s funny because I thought I was going to be a sportswriter, and now I’m nowhere close to that as a courthouse reporter,” said Reiland. “I wanted to be the next Erin Andrews.”

She took the skills that she learned at MHS to the University of Iowa, working several positions for the Daily Iowan, including sports editor and editor-in-chief.

Reiland soon began an internship as a copy editor for China Daily in Beijing, taking her across the world while just a college student.

Reiland lauds journalism as an ever-changing world but finds her abilities have always been useful. The ability to communicate well with others is a necessity. In China, she relied on her communication skills while editing translations from Mandarin to English.

“You may have goals, but it sometimes takes you on another path. Follow it,” she said.

She returned to the United States and began her professional journalism career in Buffalo, New York, working for The Buffalo News as an intern. She soon found herself back closer to her home and family and became a courthouse reporter for the Herald in March of 2016.

“She doesn’t ramble; it’s easy to understand her points,” said O’Donnell. “She has lots of wisdom in the journalism field and knows exactly what you need to be successful.”

Reiland’s key pieces of advice to journalism students was to maintain confidence, set realistic goals and learn how to communicate to ensure ideas get across clearly.
Reiland’s journalism jobs become journey
Journalism is a world-wide business. Reporter Jordyn Reiland’s journey has proven that the life of a journalist can be full of surprises.