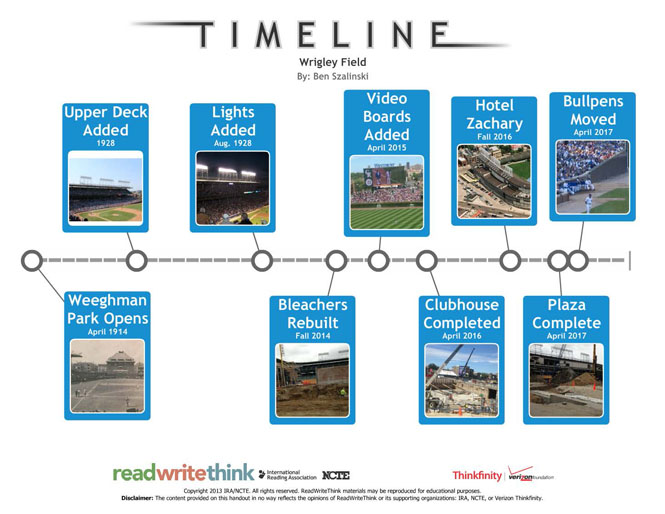 A timeline of some of the most significant changes including current renovations during the 1060 Project to Wrigley Field since it's construction in 1914.

In 1914, a small ballpark at the time named Weeghman Park opened on Chicago’s North Side at the corner of Clark and Addison. Home to the Chicago Whales, the team was disbanded the following season. In moved the Cubs, who would change the culture of Chicago forever, winning seven National League Pennants and one World Series in the Friendly Confines of Wrigley Field.

Known for its ivy-covered walls, manually operated scoreboard and red marquee, the park has seen better days. For the last decade, fans in the upper deck spent more time worrying about concrete falling on their head rather than if closer Carlos Marmol would blow a save.

When the Tribune Company sold the team and park in 2009, many wondered if the Cubs had seen its last days in Wrigley Field. The situation got as close as the mayor of Rosemont offering to build a stadium next to the airport.

But when Owner Tom Ricketts took his new job, he made two promises to Cubs fans: to preserve Wrigley Field for future generations and to win a World Series.

Renovating and modernizing Wrigley Field has never been easy. Besides the usual headaches from the city, fans have always been against change, including the addition of lights in 1988 or more recently the addition of an Under Armour logo on the outfield wall.

Now Ricketts was out to try to sell even more radical changes to fans, including more advertising and the worst of all, not one but two video boards to be installed after the 2014 season. But Ricketts asked for patience and stressed it was necessary for the team to reach the promised land.

“The renovations have definitely made it a more interactive place between fans and the team,” said Senior Delaney Appelhans. “There’s now even more places where you can experience the culture of Wrigleyville and get a first-hand look at what the Cubs are all about.”

The first phase would be the most shocking to long-time fans. The bleachers were destroyed and then expanded. Two video boards were added, one in left field and the other in right. Many fans were worried that these screens would ruin the tradition of attending a game at Wrigley Field.

However, they have been overwhelmingly accepted, providing entertaining videos about the team, replays and every stat that fans want to see during the game.

Outside the ballpark, fans will not miss the addition of an office building and a hotel that will be known as Hotel Zachary, named after the man who designed Wrigley Field. The office building is more exciting for baseball operations employees, as they now have their own state-of-the-art space that other teams have.

But outside the office, a plaza has been built for fans to enjoy on game days throughout the year with ice skating in the winter and various events to be held during the season.

The team also reconstructed a parking lot a few blocks north; however, that addition has not fixed a common complaint fans have about getting to a game.

“I would like to see more parking around the stadium to make going to the games easier,” said Senior Jack Dahlinger.

Inside, Wrigley Field has been restored to support another 100 years of baseball. Concrete is being replaced throughout the park, making the park look brand new. Fans have also seen more options to improve their comfort, including redesigning and adding bathrooms, as well as more accessible concession options.

In 2018, the Cubs will unveil the American Airlines Club behind home plate. While it is not entirely clear what this will look like, it will be an option as a private sports bar-like location for ticket holders in the pricy 100-level seats.

From a Cubs player’s perspective, Wrigley Field is hardly recognizable unless one is standing on the field. Prior to 2016, the home clubhouse was built, giving the Cubs the second largest clubhouse in the majors, a drastic improvement over the old locker room that was about the size of a classroom.

For relief pitchers, the bullpens have been moved from on the field to under the bleachers. Gone are the days of fan interactions with pitchers and dodging foul balls down the line. Players are now encased in glass, almost like a zoo animal behind the doors with the Under Armour logo. While it does allow players to maximize their readiness to pitch in a game, it is likely the most unpopular change to Wrigley Field, as it is the first traditional part of baseball at the Friendly Confines to end due to what is known as the 1060 Project, the name given to the renovation plans.

“I don’t like the bullpens being underneath the bleachers,” said Dahlinger. “You can’t see who is warming up anymore.”

However fans view these specific changes, the reception has been overwhelmingly positive. Winning the World Series only added to the benefits. The atmosphere of attending a baseball game on the city’s North Side is as exciting as it’s ever been in the ballpark’s 100-year history.