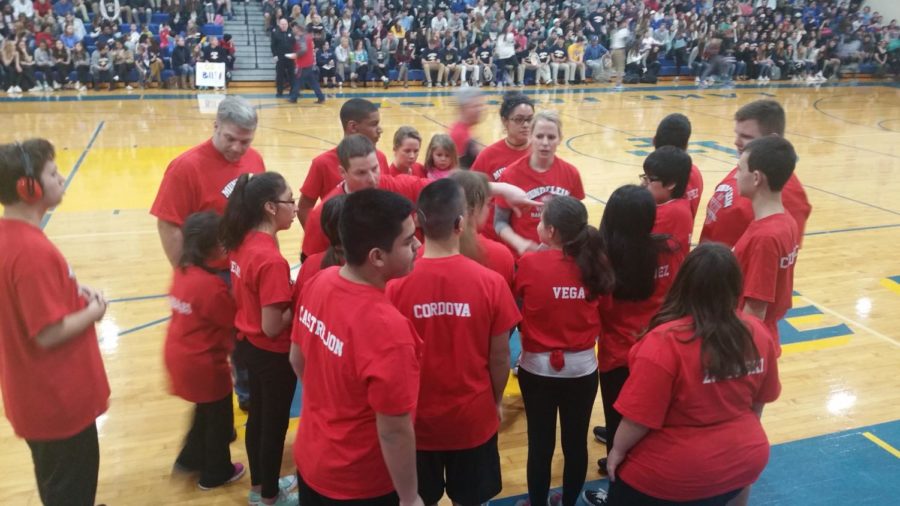 Photo submitted by Maureen Baker The adaptive P.E. basketball team prepares to take the court against the Lake Forest Scouts for the team’s first basketball game, which occurred last year. This year’s game will be played on Friday, Dec. 8 on the MHS courts during the lunch periods against Warren High School Blue Devils.

The adaptive P.E. class is preparing to take the court on Dec. 8 when the students will play Warren High School’s special education team during the lunch periods in the Main Gym. This will be the first game ever held at MHS, and the first time playing against the Blue Devils.

Last year marked the first footprint of the tradition for the members of the adaptive P.E. basketball team. The students played Lake Forest High School but were unable to claim a victory. They were not expecting another chance at a game this year.

“Last year, it was exciting because it was the first time that my P.E. team was doing a basketball game, and then when I found out [we’d be doing another game] this year, I was like ‘Oh cool!’,” said junior Kelly Corbin, team member.

The event will run primarily during fifth and sixth period, but preparation will begin in the fourth period, and the game may lead into seventh.

No matter the length of the game, though, the coaches want the student athletes to have the best experience possible by having a crowd cheering them on.

“The goal is to try and get as many students in the bleachers as possible and feel the full effect,” said Reed Christensen, adaptive P.E. basketball coach and teacher.

“We have a very wide range of kids,” said Brett Wilhelm, special education basketball team coach and P.E. teacher. “The whole goal is to see [all the students] have a role and a part in the game.”

In addition to the adaptive P.E. players, there will also be four physical education leaders, general education students, who will be acting as on-court coaches while Wilhelm and Christensen will be covering the bench.

Corbin herself is also ready to act as a role model for the team and the new participants in the game.

“There are more incoming freshmen in my P.E. class this year, so I’m excited they get to know what a team will be like,” said Corbin with a burst of excitement.

Even with the leadership of others, there are still butterflies in the stomachs of the players.

“I’m a little nervous but excited,” said freshman Carissa Kusek, one of the seven freshmen who is participating in the Friday game.

The preparation of the players began during their gym period, and many have taken the role even further.

“I practice at home,” said freshman Neila Stevenson, who also said she is anxious about taking the court.

However, the Stevenson finds the atmosphere a bit different during the gym periods than from the one at home.

“We cheer for each other at practice,” said Stevenson.

With these constant practices, the athletes said they are ready to take the court with their positive and eager attitudes right behind them.

“The students that played in it last year and are returning are ecstatic about it,” said Christensen.

Just from last year, Christensen and Wilhelm knew this couldn’t be a one-time event and were determined to make this a new tradition.

“Just seeing our kids [last year], having our kids walk out [ onto the basketball court], telling us that they were nervous, it was really kind of cool just to see their body language,” said Wilhelm. “Right when we saw this, I was like, ‘Man, we got to do this’.”