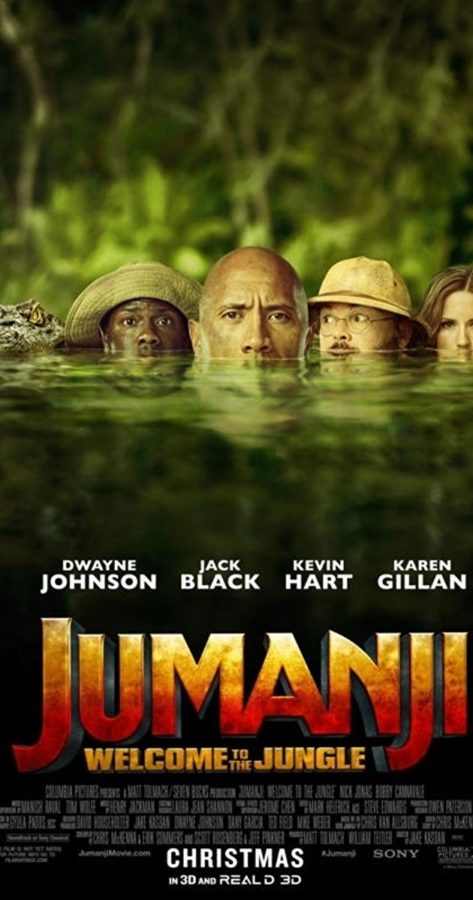 Above is the Jumanj movie poster

While some may have seen the original “Jumanji” made in 1995, starring Robin Williams, Bonnie Hunt and Kirsten Dunst, the newest, 2017 version of the film called “Jumanji: Welcome to the Jungle” offers a 21st-century twist. The movie provides a video-game-like experience and also makes the viewers feel as if they are living the film.

Teens and adults came out of the theater laughing after watching the new action-filled and comedic motion picture. The writers and directors of the film made sure to develop a story that would keep all ages entertained and also made sure to pack the film with a talented cast.

The movie begins by presenting the main characters as four normal high school students who find a game. Unlike the original film, in which the game is a board game, in this version, the game is a video game. This change gives the audience a more exciting and creative way to view the movie since video games are more popular today. The writers and directors made a bold choice to make this change so that the story becomes more relevant to the modern viewer.

Once the game is found, the four teens push play and are sucked into the game, becoming their chosen avatars, which are played by Dwayne “The Rock” Johnson, Karen Gillan, Kevin Hart and Jack Black. Nick Jonas also makes a cast appearance in this film.

As the characters work as a team to beat the video game and get back home, they face many moments of action and comedy, which keeps the viewers on the edge of their seats as they watch the plot unfold with curiosity, waiting to see what the outcome will be.

As online reviews show, many people enjoyed the movie and thought it was put together well. This new and improved version gave audiences what they asked for–something to keep them intrigued, and it didn’t disappoint. Humor mixed nicely with a lot of action, and with a PG-13 rating, the movie contained very little inappropriate language. It did contain some violence given it was an action film.

Some might say sequels will never be better than the originals, but the new “Jumanji” puts that statement to the test by adapting a classic for the 21st-century audience.