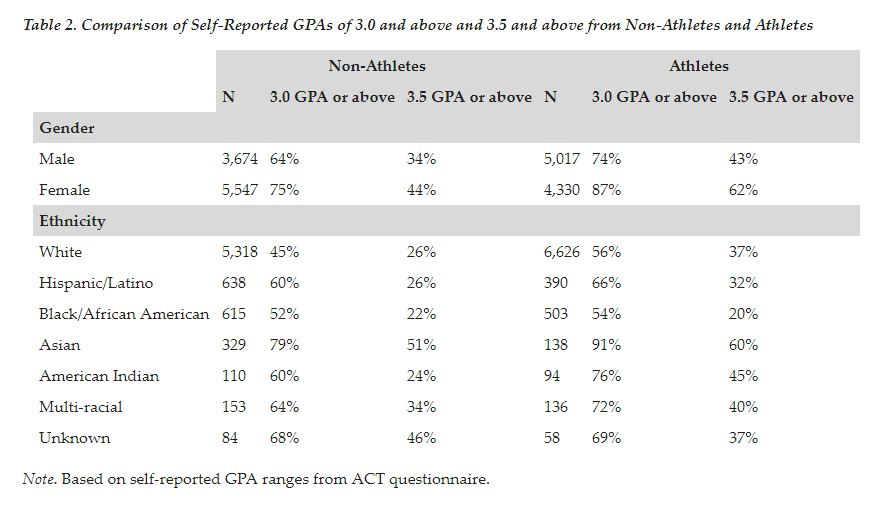 Printed in the March 2012 issue of the Journal of Sport Administration & Supervision, the table shows data collected from a 2008-2009 high school study done in the state of Kansas by Angela Lumpkin, a professor in the Department of Health, Sport and Exercise Sciences at the University of Kansas, and Judy Favor, an Assistant Dean of the School of Education and the School of Professional and Graduate Studies at Baker University.

From grade school to college level, students add on to their normal school day with extracurriculars, including sports. By doing so, these students often see positive results, ranging from building  character, dedication and a work ethic to seeing improvements in their academic performance.

This trend also exists at MHS, which sees large numbers of students participating in a variety of activities.  Data has shown that students in extracurriculars are more likely to excel in their academics than those who do not participate in any extracurricular activity.

According to information gathered by the Athletic Department, 2015-2016 at MHS had a total of 855 students involved in activities with an additional 881 in a sport.

The total number of participants in sports and clubs the next year was 1,351 students, with 936 students involved in a school sport.

That year, those in an extracurricular activity averaged a 3.37 GPA whereas the 604 students of MHS who did not participate in any kind of club or sport averaged a 2.53 GPA.

In a 2008-2009 high school study done in the state of Kansas by Angela Lumpkin, a professor in the Department of Health, Sport and Exercise Sciences at the University of Kansas, and Judy Favor, an Assistant Dean of the School of Education and the School of Professional and Graduate Studies at Baker University, found that the academic achievement of students who did and did not participate in a school-sponsored extracurricular activity differentiated.

According to Lumpkin and Favor, “High school athletes earned higher grades, graduated at a higher rate, dropped out of school less frequently, and scored higher on state assessments than did non-athletes; results on the ACT were mixed.”

To encourage individual academic growth, sports teams can work together to display their dedication toward their studies by being awarded for achieving a collective GPA.

“A majority of our athletic teams achieve what is called ‘all-academic, all-state status’. If you have a team GPA of 3.0, it is achieved by adding all of the varsity athletes together, but all academic for a student is 3.5,” said Troy Parola, head of the Athletic Department.

These aren’t the only academic standards faced by student athletes.

“The IHSA [Illinois High School Association] requires, which we follow, for a student athlete to be eligible, they must be passing five academic classes,” said Parola.

As a result, student athletes must learn time management skills and study habits.  Balancing school and sports, then, becomes a way of life for many athletes.

“I feel like [the balancing act is] just always a part of my life, so it’s always going to be there. I feel like there’s never going to be a change because I’ve always been expecting I have sports to stay for, so I have to do homework later,” said sophomore Morgan Frank.

Frank transitioned from a three-sport athlete to a two-sport athlete, focusing on her main sport of basketball, so she could also focus more on her studies.

Even if a student does not participate in a school sport, there are other outside-of-school extracurriculars that can offer the same lessons as activities hosted by the school.

“I spend about 15-16 hours dancing, Monday through Friday, so I find myself dedicating some weekend days to my homework,” said sophomore Sophia Gilardi.

Although Gilardi does not participate in school sports, she said she maintains a schedule that has taught her how to prioritize her school work given her other commitments.

School administration also said the focus for student-athletes should first be on their studies and then on their sports commitments.

As Parola said, “We’re creating a culture where the word ‘student athlete’ means something. You have to be a student to be a high school athlete. It’s student first, athlete second, and that’s across the board.”