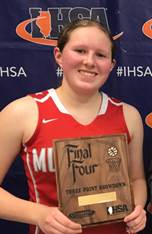 No other Mundelein girls basketball player has achieved such a high placement since the competition’s start.

“Being able to shoot on ISU’s floor was incredible, and all the parents, coaches and teammates all supporting me wearing Mundelein gear was really awesome,” said Buscher. “I had a press conference and a participation pass; I felt I was a part of something really cool.”

Buscher focused her attention on the Three-Point competition once the 16-seeded Mustangs were eliminated in the regional semifinals versus top-seeded Warren High School Blue Devils.

“After the regional game, a few days a week, my coach, Morgan Frank (sophomore), and Elia Maldonano (senior) came out to help me [practice], and we just set up racks and got shots up and made sure I was still warm right before the competition,” said Buscher.

Buscher’s mission to compete in the Three-Point Showdown ended up attracting the attention of many in the community.

“Through first-hand knowledge I know that all the girls in the girls basketball program were excited [for Buscher] and spread the news like wildfire to all the students,” said Athletic Director Troy Parola. “All the kids were talking about it, like at the [winter] dance, [and] kids on social media were obviously spreading it around. My wife and I, at Coldstone, heard kids in there talking about it as well.”

Girls Varsity Basketball Coach Greg Dorgan expects Buscher’s achievement to have a positive impact on the basketball program.
“Her individual accomplishment along with a win in the regional is huge momentum for us going into the off-season [and] into next season,” said Dorgan. “There are young girls in our feeder program that are recognizing a senior finishing this way and being on TV, and this spotlight and these big games–that’s what they want to be when they grow up, so they are looking up to players like Hannah.”

Buscher said she has reached this level of performance through a strong commitment to developing her skills.

“Hard work really does pay off,” she said. “I’ve been doing a lot of shooting clinics and have been working so hard as a shooter, and this year I really showed off my skills that I’ve put the work in for all these years.”