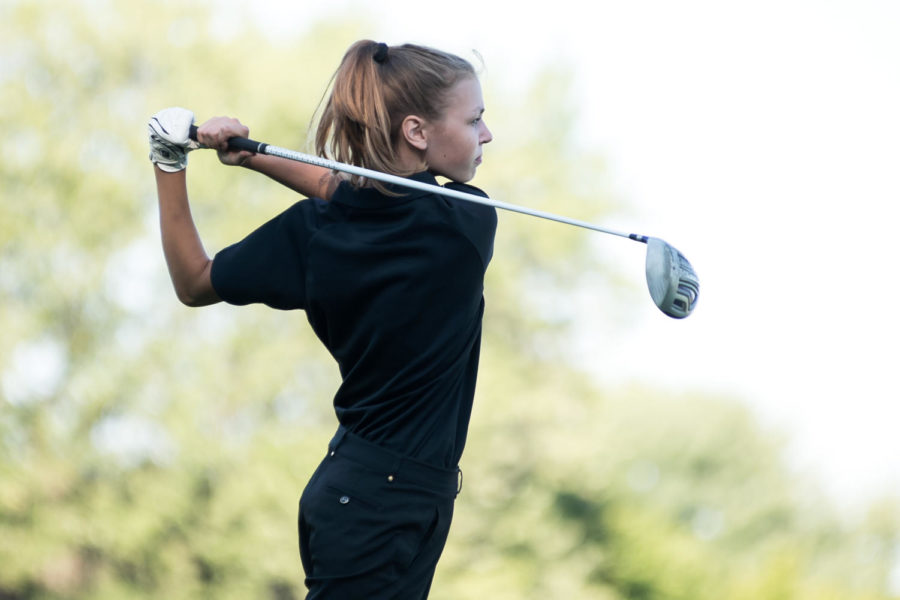 The girls golf team is driven by their teammates, the joys of the sport and their individual and team goals to have a great season this year.

Led by Coach Thomas Kuhn and Captains Alex Hevko and Ryan Wilson, both juniors, this combination of juniors, sophomores and freshmen is hoping to improve from last year and advance some members of the team beyond conference.

“I am hoping that we can send one of the girls to sectionals. [The season] is going really well,” Hevko said.

These girls are focused on developing their individual skills and working together to push their team to a winning season.

“To shoot our team personal best [and] just keep on improving,” Olivia Szalinski, sophomore, said about the goals the team has for the season.

Starting the season with a 2-0 record, the team is already “winning more games than we have in the past three years,” Hevko said.

“I think [this year] already has been better than last year for sure,” Szalinski said. “I think we’re all just more dedicated this year, [and] we want to actually show other teams that we’re good.”

A new coach might also be the reason for the difference.

Kuhn has coached the boys golf team for twelve years, but this is his first year heading up the girls team.

“It’s rewarding to see girls improve and to get to be outside around energetic kids,” Kuhn said. “Especially with coaching girls who haven’t played the game nearly as long, they’re more open-minded, willing to try new things, and when you see improvement, it’s really rewarding.”

Girls golf consists of one team of nine golfers who said the benefits to playing the sport carry beyond the sport itself.

“You’re under a lot of pressure a lot, so that makes you better at taking a test,” Szalinski said. “When playing golf, you always have people watching you; it’s all quiet, and the focus is on you, so you have to be able to step up and perform.”

Besides improving performance under pressure, other benefits include meeting new people and developing as a player.

“I like how I made many friends this year, and I learned some new things throughout the season,” Kellie Shanahan, freshman, said.

The golfers also discussed what makes the sport challenging on an individual level.

“[The hardest part is] probably the competitions when you have to do your best because every time you’re trying to make your score better, [and] you want to get your personal best,” Szalinski said.

The same feeling seems to be shared among other players on the team.

“Honestly, for me, [the most challenging part is] when I’m playing, and I hit a bad shot, you gotta like regroup,” Shanahan said.

Maddy Forster, freshman, shared that bad shots are “the exact same” for her when it comes to the challenges of the match.

Kuhn addressed some of the difficulties the team is facing, especially because some of his players are new to the game.

“The hardest part is getting numbers because not a lot of girls play this sport when they’re younger, so it’s hard to get kids to come in,” Kuhn said.

Even though this team is small in comparison to the other teams at MHS, Kuhn and his players said they are hoping that the golf program can gain in numbers.