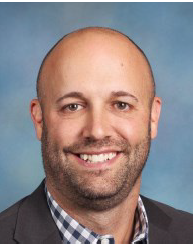 Mike Pope, the new assistant principal, received a cold welcome of “boos” from some of the students at the Back-to-School pep assembly. This response came a few days after he introduced to the student body a new tardy policy with stricter consequences that some students said feel too harsh.

However, Pope said there’s “actually a pretty nice guy” behind the AP desk. To the Mustang staff, he opened up about his life, his top favorites and his aspirations as the new assistant principal.

Past experience: Most recently, he was Round Lake High School’s assistant principal for six years.

Favorite sports team: The Chicago Cubs– “I mean I like the Bears and everything, but if I had to pick one, it would be the Cubs.”

Favorite book: “The Da Vinci Code”–“That probably took the least amount of time to read because I couldn’t put it down.”

Motto in life: “‘You’ll always miss 100 percent of the shots you don’t take.’ That’s usually the quote I put up on a wall every time I go somewhere.”

Person who inspires him most: His parents.

#1 reason why he likes MHS and his new position: The people– “Everyone’s been really, really helpful and welcoming. Even the boos, I appreciate it; at least they’re interacting.”

#1 thing he is excited for at MHS: All the extracurricular activities– “I will be at many things, and I’ll bring my family. It’s one of my favorite things about being in a high school; there’s always something to go to: a sporting event, a play, something with the band.”

Best part about being the new AP: “The chance to get out and interact with all the students in the hallway and teachers.”

Hardest part about being the new AP: “Sometimes you’re the bad guy. Like I said, in all my presentations, I’m actually a pretty nice guy, but my job requires me to be in charge of discipline and student behavior, so, by default, sometimes you’re categorized as a bad guy.”