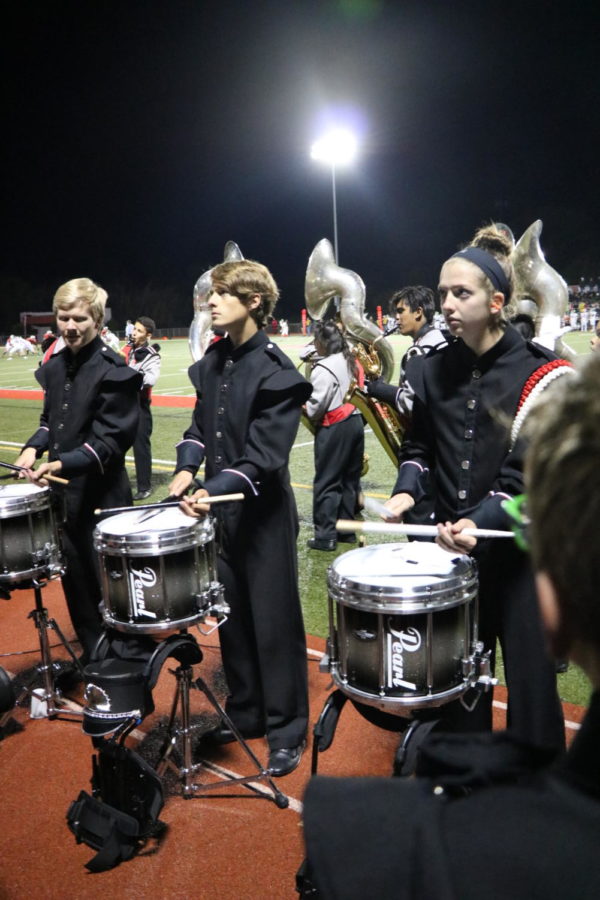 Senior Jillian Hoffstadt plays her drums to the beat of a song at a football game during the 2018 fall season.

Senior Jillian Hoffstadt leads the drumline in a cadence before a football game. Her tap off echoes off the school building making it harder for them to stay in time.

The deep thud of the bass drums beat in each person while the different pitches of the tenors keep the song fun and lively.

The higher-pitched snare drums’ steady rhythms can make those nearby want to bob their head to the beat, and the splash of sound from cymbals top it all off, becoming the walk-off-the-field cadence each band kid knows too well.

After joining percussion in fourth grade and continuing through her senior year, Hoffstadt has earned the honor of being drum captain, who is responsible for guiding the players to play the best they can and to lead them to play the correct rhythms.

“Band is a big part of my life, and I wanted to be a good leader for all the freshmen,” Hoffstadt said about why she went out for the drum captain role.

Now labeled as the mom of the group by her peers, Hoffstadt said she enjoys her leadership role on the Marching Mustangs drumline because of the growing opportunities it has provided.

“It’s made me better at hitting some curveballs…and I had to learn how to say I don’t know and be ok with that because you don’t always have the answers,” said Hoffstadt, who added percussion didn’t really click for her until middle school.

“At first, I didn’t think I was that good because I didn’t know what I was doing, but no one else knew what they were doing, so that’s fine.”

But once percussion finally clicked for her, Hoffstadt was motivated to continue with percussion her freshman year of high school.

“For a freshman to be on drumline, it kind of guarantees that you’ll be on drumline for the rest of your high school career,” she said.

Hoffstadt started on crash cymbals her freshman year, which she said was a good choice for her. Then, during her sophomore year, she played the snare drum. It was this year she realized she wanted to pursue the role of drum captain.

At the time of this realization, graduated Anna Desfor, class of 2017, was drum captain. She inspired Hoffstadt to become who she is today.

“She didn’t scare me away from playing; she made it more fun,” Hoffstadt said. “She didn’t let simple little things get in the way of the big picture.”

This process requires someone to be “very well prepared with all their parts. It should be someone who not only is prepared on their own parts but has a good working knowledge of how the other parts work with their own,” Band Director Jerry Shelato said.

Given this level of responsibility, many view Hoffstadt as a leader. To Abe Kim, a freshman on snare, she is “a special kind of leader.”

“She made me feel like I was a part of the drumline,” Kim said.

Hoffstadt’s ability to prepare and connect her section has been noted by her director, too.

“She is good at identifying the needs of her section and those around her and drawing attention to those in such a way that solutions can be identified and put into place,” Shelato said.

Drumline, then, isn’t just about hard work and effort; it’s also about the relationships among the drummers.

“Honestly, if I didn’t have drumline, I would have like two friends,” Hoffstadt said. “We’re just a big family.”