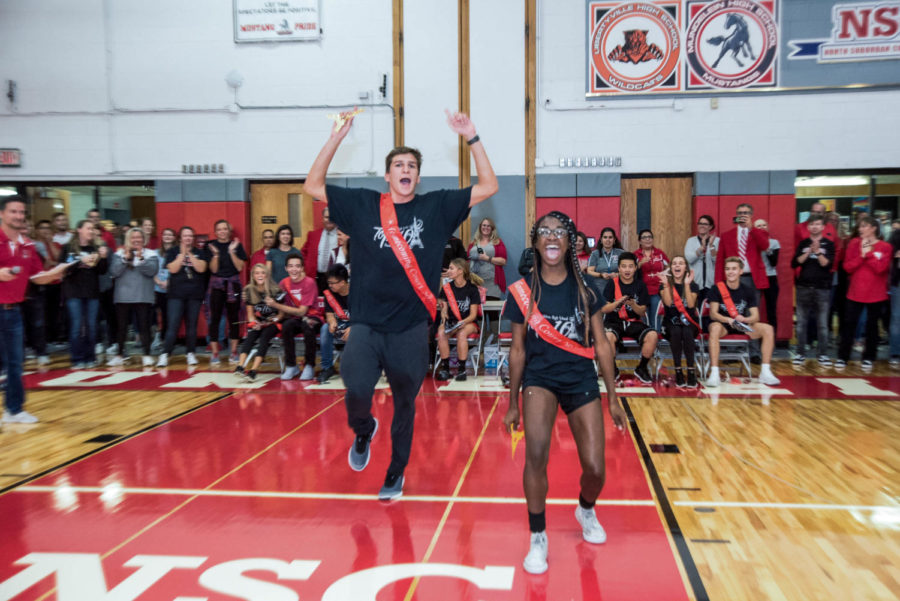 Seniors Jake Garcia and Khari Thompkins jump with joy when they found out they were named the 2018 Homecoming king and queen.

Senior Jake Garcia walks the halls as a varsity athlete for boys swimming and for water polo, as a member of the Student-Athlete Leadership Training program and as the school wide president in Student Leadership.

“My main activities are varsity swimming, water polo and Student Leadership, but I am also in Triathlon Club, on the Race Equity committee and was in Link Crew junior year,” Garcia said. “There may be more, but I can’t even remember.”

Given these various roles, particularly his position on Student Leadership, Garcia has committed his time to helping the school and its students reach their full potential.

He said that was one of the main reasons he joined Student Leadership in high school. Another reason was because his older brother was involved.

“I wanted to be on the exec board for the Sophomore Class when I was a freshman, and ever since then, I just made my way up the ranks– starting at Sophomore Class VP, Junior Class president, and now currently school wide president,” Garcia said.

Garcia sits on the executive board as the school wide president with Vice President Jillian Hoffstadt, senior, and Secretary Alex Martinez, junior. Together, they help oversee such school-wide events as the dances, the Mustang Olympics and the Back-to-School Bash.

“What Jake does really well is that he is pretty outgoing and good at getting everybody involved,” said Hoffstadt, who has known Garcia since freshman year.

Simply put: Garcia is a people person, and this trait was acknowledged by the student body when they crowned him Homecoming King at the Homecoming Assembly in October.

Cynthia Henrichs, co-sponsor of Student Leadership, said there is no one else she could think of to be a better president. She added he is able to work with any student he encounters, and while he may have his own opinions, he makes sure to listen to others.

“He never takes the approach ‘my way or the highway,’” Henrichs said.

Instead, Garcia’s goal is to get as many students involved in school activities as possible.

“I think student involvement is very important because if everyone was in one club or activity, it holds them responsible for something and builds the basic blocks that you’ll need for life,” Garcia said.

To get more students involved, Garcia makes sure to ask his peers what they think regarding various school activities.

Henrichs noted he doesn’t just ask other Student Leadership members; he also asks for input from anyone he encounters.

Although Garcia interacts with a variety of people, he said the person he admires most in the school was Social Studies Teacher Mary Plucinski.

“You can feel that she just genuinely wants to get to know all her students, and I hope one day I will find a job that I am as passionate about as she is to her job,” said Garcia, who had her his freshman year and added he loved going to her class because of the welcoming atmosphere she created.

He then had Plucinski sophomore year again and said he had even a better experience because of her passion for teaching criminal justice.

Plucinski described Jake as “awesome” and commented on his “unique quality”: “He is not afraid to look silly to take risks. It sets him apart from other students. That holds a lot of people back, but it sets him apart.”