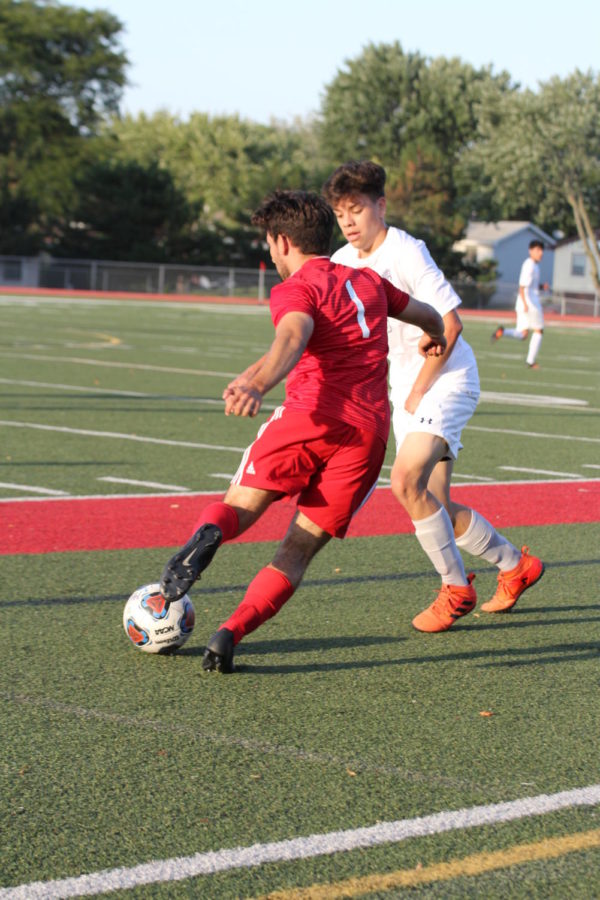 Senior Bryan Alba’s efforts, talent and commitment were recognized after being named an all-state player when the 2018 soccer season came to an end.

“The fact that I was nominated by a list of coaches from a bunch of different schools makes this feel really special,” four-year varsity player Alba said.  “I’ve put in a lot of work throughout these past four years, and the feeling of finally being recognized for it is amazing.”

Known as one of the strongest overall players on this year’s team, Alba used his talents to benefit the team and have a positive influence on his teammates.

“He brought his vision and soccer knowledge with him,” said Senior Co-Captain and center midfielder Armando Rosiles. “He’d always be there to give that push to keep us in tight games. Without him, we definitely wouldn’t have been as successful as we were this year.  Bryan is a very relatable guy that’s super hard working, ready to go and a great leader.”

Because of Alba’s genuine and encouraging character, being named as an all-state player came as no surprise to his teammates who have always seen him as a leader who has earned what he’s worked for.

“Bryan is worthy of all-state because he’s been competing at the varsity level since he was in eighth grade,” said varsity player of three years Camden Kowalski, junior. Hands down, he’s always been one of the strongest players on the field.  He can literally take on 10 guys that are twice his size and still hold on to the ball and score. He is just a standout player all around.”

Having played soccer all his life, Alba speaks highly of the sport and the support systems that have gotten him to where he is now.

“I really want to continue playing soccer because I love it so much and [love] meeting new people through playing,” Alba said. “I’ve played since I was little, and I really don’t want to finish my career at eighteen. It’s something really special.  When the younger classmen on our team graduate, they’re going to say to each other, ‘I’m really going to miss this, bro.’”

The boys soccer coaching staff at MHS works to support and encourage their players in all forms of their lives, not just on the field, which has influenced the way Alba now looks at himself and the world around him.

“Coach [Ernie] Billittier has by far been the best coach I’ve had,” Alba said.  “He’s shown me how to stay motivated, how to change as a person, how to mature and just how to always keep moving forward.  Each year that I’ve played, I’ve been able to see how much soccer means to people and what they love about it, and it really means a lot to him.”

Rosiles also acknowledged the impact coaches have had on the team.

“Our coaches are trustworthy and fun to be around,” he said.  “They were a big factor in helping create the bond that we had on the team. They made us feel like family and made sure we had each other’s backs. Without them, the atmosphere wouldn’t have felt so positive. They were the reason we couldn’t wait to start practice.”

Leadership from the coaches and the players helped the team ensure they had a better season this year than from those in the past.

“The most memorable moment for me was winning regionals at our home field this season. There was a tournament a while ago where we lost pretty badly, and Coach B. wasn’t too happy,” Alba said.  “He talked with us about it and then left us as a team in the gym.  This was the best thing he could’ve done for us.  One of us stood up and straight out asked, ‘Do we really want to win state?’  From there, it sparked a really important conversation between us as a team.  This was the point where we promised each other and ourselves to get it together and do it.”

Moving forward with new goals ahead of him, Alba plans to achieve his plans with his team in mind and what he’s learned this season in soccer.

“This award just makes me want to continue playing soccer and keep bettering myself overall as a person,” Alba said. “In the end, it’s always more than worth it.”