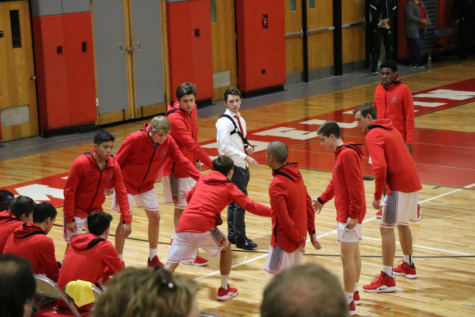 Brandon Paluch, Nolan Thier, Sam Eddy, Andrew Gonzalez and manager Kyle Schaller are the five varsity seniors who have been committed to the boys basketball program all four years of high school.  Because these players have poured countless hours into preparing for each season, their leadership has become vital to the team’s performance.
“Being a senior on the team with a bunch of younger guys, not only do we have to lead with our voices, but also by leading by example,” Eddy said.
Although many see leaders as being vocal, the seniors this year have emphasized leadership through action.
“I make my presence known on the court by actions,” Thier said. “We don›t really try to speak as leaders because actions speak louder than words.”
However, when the time is right, the seniors said they don’t hesitate to speak up and let the team know what they need to improve on.
“In the locker room I think we are kind of the loudest people, especially before games, always getting everyone ready to start the game with energy and focus,” Gonzalez said.
Some of the seniors also mentioned that they picked up these leadership skills from past upperclassmen and are now filling their shoes today.
“Going through the program these last couple years, one of the ways I learned from the upperclassmen was always watching when we were practicing with the varsity team– what the older players did and just feeding off their energy,” Eddy said. “I really just focused on doing the things they did that helped them become successful basketball players.”
The team started off slowly this season, losing their first two games, but near the end of the season, the team had a winning record of 17-9, an improvement from last year’s record, which was 14 wins and 16 losses.
Although the stars of the team may be two dominant sophomores–Connor Enright and Scottie Ebube–leading the team on the court, the seniors continued to play major roles throughout the season.
“Overall leadership for the seniors is often shown through how they accept their roles and often, more importantly, how they accept the roles younger players are assuming,” Head Varsity Coach Matthew Badgley said. “Older players can have playing time reduced when younger, talented players appear, yet their roles, then, can become even more important, and the leadership of accepting new or adjusted roles can often determine the culture within the team.”
Going forward, the Mustangs not only had major expectations for this season but for the upcoming seasons as well.
“This year, I hope our underclassmen learn from our seniors that patience is important over the four years,” Badgley said. “Graduation will often create opportunities that they must be ready to assume.”