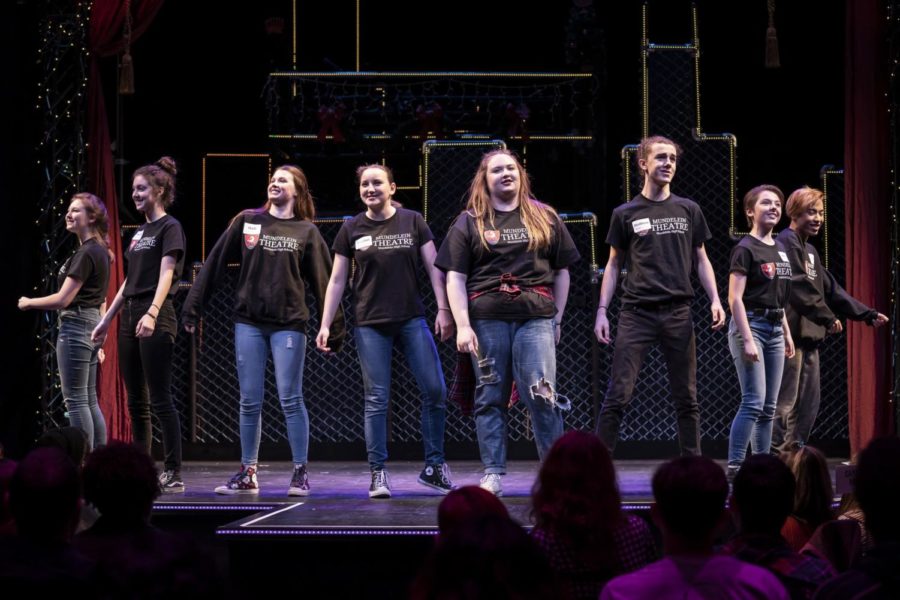 Competing against more than 50 schools around the Chicagoland area, the MHS Shakespeare Slam Team placed as a runner-up after qualifying for the final bout at the Chicago Shakespeare Theatre at Navy Pier on Dec. 10.

In the past three years, the team has qualified for the final bout and was named slam champions in 2017.

“The whole program is meant to be a celebration of Shakespeare’s writing and a way to get young kids involved and learning about it in their own creative ways,” Junior Katelyn Staroszczyk said.

Each school “team” that may consist of up to eight performers must prepare to perform two pieces for the two rounds in which they are expected to compete.

The first round is classified as the “scene round” where performers must choose a scene from Shakespeare to portray. Each team may utilize anywhere from two members to all eight participants. For this first round, MHS prepared Act 5, Scene 1 from “Twelfth Night.”

“What makes the pieces fun and challenging is that they both can only be up to 5 minutes long,” Junior Colin Nacion said. “It seems like a short time, but there’s actually a lot you can fit into it.”

The “dream round” is considered the second round where each year there is a designated Shakespearean play in which each team must create a reimagined scene. This year, teams had to work with “Macbeth.”

Many team members believe this round is more challenging but is also where the most fun happens.

“If I had to describe Slam in one word, it would be ‘community.’ The cast and Bard Circle get very close through the process of rehearsals and performances, and it is a really special group of people,” Senior Rachel Larson said.

Many said the slam team is an important feature to the theatre program because it offers a competitive side to acting not necessarily offered through the other school performances. Additionally, the experience allows for closer bonds among the members as they prepare for their competitions.

“The best thing about slam to me is the bond you get with the rest of your team and the “spirit of the slam,” as they call it down at Navy Pier,” Staroszczyk said. “With your team, you grow very close to them and spend lots of late nights at school working on your pieces.”

This “spirit of slam” also carries beyond the school team to other teams from other schools.

“All the kids from the other high schools, even if you don’t know them, are super easy to become friends with,” Nacion said. “I’d never experienced anything like it before. There’s no other way to put it. The common goal, the common love for Shakespeare, the positive atmosphere– it’s all great!”

While being a fun experience filled with friendships and endless rehearsals, the slam team is also an educational experience in order for students to learn more about his work and the essence of Shakespeare. The students obtain a love for the knowledge of the scenes they rehearse.

“The atmosphere is a safe environment where you are encouraged to explore, make mistakes and meet new people,” Larson said. “It is amazing being a part of the slam team for anyone interested in bettering their text analysis or becoming familiar with Shakespeare as well.”

Students on the team become close with the works of Shakespeare because they must cut their own scripts as a team, so they start preparing for the competition season over the summer.

“My future hopes for the slam team is to open it up to more facets of the school and hopefully see some new faces in the writing room,” Staroszczyk said. “It’s very much a group effort, and new ideas are always a great thing.”

Even though Shakespeare Slam is a competition, winning isn’t the focus. The focus is about students coming together over a shared interest of Shakespeare and/or acting.

“The motto of the Chicago Shakespeare Slam is that ‘the points are not the point,’” Larson said. “They work very hard to make sure that it is a safe and fun environment for people of all experience levels from all different kinds of theatre programs.”