Show Choir in the Spotlight: What this shining art is all about 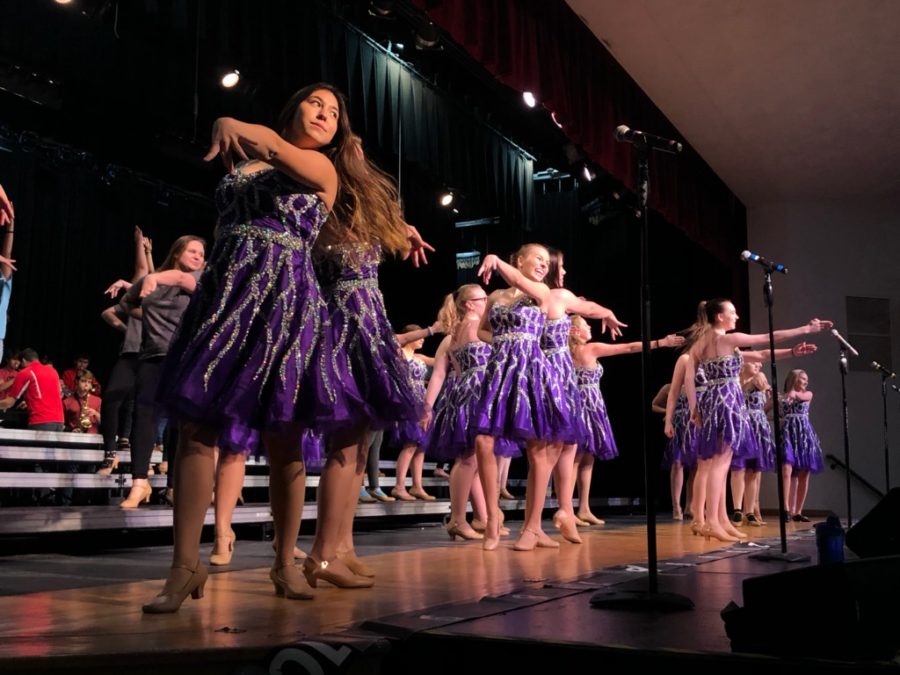 Junior Kira Buckner of Sound and Lights poses at the end of a performance that included songs “Born This Way” by Lady Gaga and “Just Be” from the theatrical production “Kinky Boots.” At the time, Show Choir was practicing for its annual Spotlight concert, which was held Dec. 7.

Show Choir is a class that takes up one period a day and substitutes as a wellness credit. While some students outside the class don’t understand why these students don’t have to take P.E., those in Show Choir explain the active schedule they keep in and out of the classroom.

Sophomore Matthew Callas takes part in Show Choir because he calls it “a whole deal” and said “it’s so worth it.”

Like sports, Show Choir has its own competition season that runs from the end of January to the end of March. All the students’ work during these rehearsals contribute to their outcome at competitions.

Competition season is one of the most stressful times for a student and even the teachers.

Choral Director Stevee Bellas described it as “very busy, [but] a lot of fun, especially to see other groups from all over the country.”

MHS has three different show choirs that participate in these competitions, and all three groups attend four competitions throughout the season.

Lights is the all-female group of students. Many weekend clinics are provided for this group, but they meet during the day, too.

Junior Marta Sikora said she “honest[ly] loves the outside aspect of Show Choir” because members do many fun activities, including a Secret Santa and parties, but she emphasized that “just performing is really fun,” too.

Another Show Choir group is called Sound FX, which is the all-male group. They meet during the school day and outside of the school day, too.

In preparation for the competition season, these groups choose songs to perform and choreograph dance moves to these pieces.

For example, Sound FX focused on the theme of believing in yourself and being the best you can be.

By choosing this theme, the choir members hoped to empower those around them.

Also in preparation for competition, the Show Choir program hosts the Spotlight performance in the winter season to showcase each group’s work.

“My reaction is always consistent, and I’m always blown away by the talent that our kids have in their ability to perform under pressure,” Calhoun said.

Working so strenuously can be difficult without a direct result. But when there is a big show that demonstrates all the students’ skills, the payoff can be priceless.

Despite the hard work and time commitment of Show Choir, students stay with it because, for many, it becomes a second home.

“We’re all like a family in Show Choir,” Senior Rachel Larson said.

Larson has been in Sound for four years now and said that joining freshman year helped her come out of her shell.

She said, “I don’t really know what my life would be like if Show Choir wasn’t a part of it.”