Winter Play stages different kind of play than those before 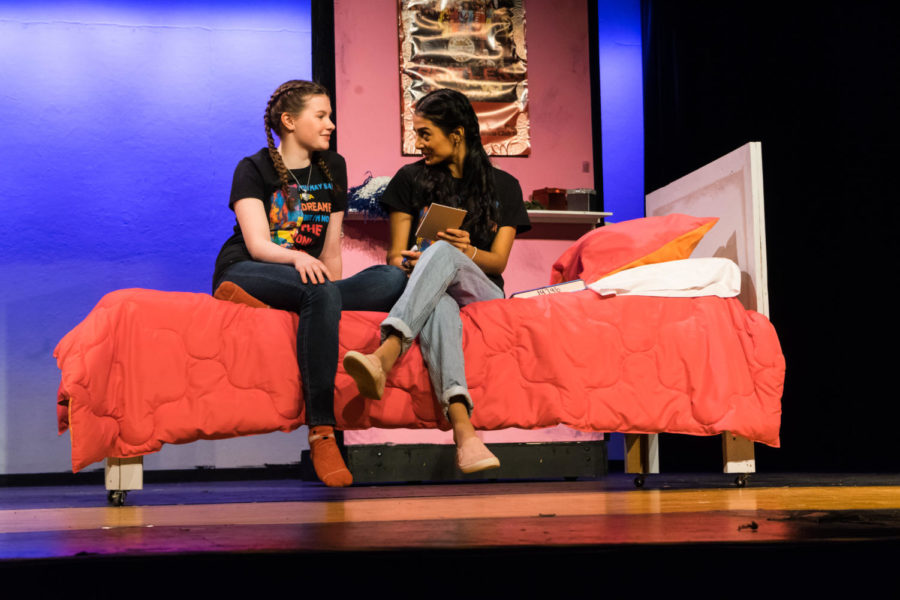 Although the Winter Play, “John Lennon & Me,” took place in a children’s hospital, it was actually a comedy—until it wasn’t.

MHS Theatre performed “John Lennon and Me,” its third play of the year, from Jan. 31-Feb. 4.

The play is about main character Star, who has cystic fibrosis, so it shows the struggles that she goes through while she is in a children’s hospital.

Star was played by Senior Halli Carpender in the principal cast and by Sophomore Mary McMurray in the understudy cast.

“My favorite part about playing Star was my interaction with the audience,” Carpender said. “I was given a lot of free-range to talk to them and walk up and down the aisles. That proximity to the audience makes the show a lot more intimate and, hopefully, more captivating.

Although Carpender has been involved in theatre for all four years of high school, she said Star was her “first role of that magnitude.”

“It was a little intimidating at first but so much fun to explore,” she said.

While most of the shows were done by the principal cast, the understudy cast put on its own performance on Feb. 2 at 2 p.m.

McMurray worked very closely with the principal cast member to develop the character together as a team. Working as a team with both casts is what McMurray said she enjoyed about the Winter Play this year.

“I just love the people,” McMurray said. “I really, really enjoy the people I get to be around.”

Working with various members of the cast is what Carpender has enjoyed about being in theatre, too.

“My favorite part of theatre is the rehearsal process,” Carpender said. “It’s fascinating how our characters evolve as we continue to develop them, and each cast has a unique dynamic that can’t be replicated for any other show. Every group is different, making it all the more special.”

Another unique situation to this year’s Winter Play involved the musical selection.

Even though the theatre program puts a musical on in the spring, the Winter Play expanded the musical side of its production.

“The script calls for some Beatles music to be played throughout,” Meier said. “We’re really expanding on that.”

The play called for a lot of Beatles music because the main character in the play is a huge Beatles fan. The music was performed live by students, turning the play into a mini-musical with such favorites from the Beatles as “She Loves You” and “I Want to Hold Your Hand.”

In charge of the music was Steven Weiss, junior, who also sang during the play while directing the musical aspects of the performance.

In reflecting on his whole high school experience so far, he said he enjoys being part of the theatre team for each play because “[he] gets to be someone [he’s] not for a month.”

Besides having music, “John Lennon and Me” was also different from previous plays because of its time period.

For example, the Fall Play, “The Diviners,” took place during the Great Depression, whereas this play was considered more current while also dealing with diverse topics, such as life and death and children with diseases.

These topics are the main reason why Meier decided to put on this play.

But as Carpender mentioned, the most challenging part of theater is “being unafraid to step outside of [one’s] comfort zone.”

She said, “Sometimes I feel like I’m making a fool of myself, but it will end up being completely within the realm of the character.”