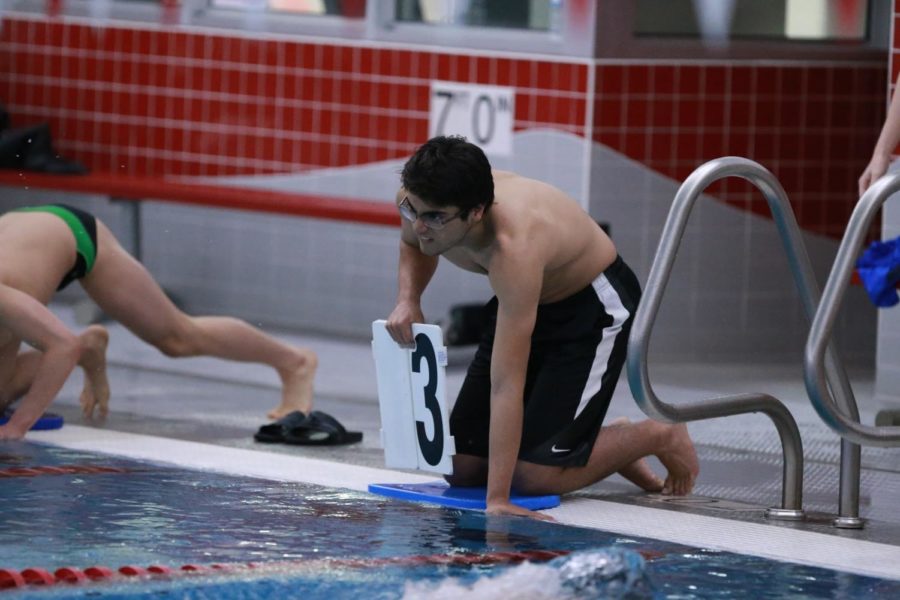 Freshman Omar Fathallah cheers on his team at a home meet poolside.

For years, the boys swim team has had success both as a team and with individual competitors making it as far as sectionals. With the addition of some fast freshmen, the team looked to make it further than sectionals this year.

“The goal is to win sectionals. We have been second a number of times but have never gotten over that hump,” said Rahul Sethna, boys varsity swim team coach. “If we could do that, that would be the first time in school history.”

As the team looked to make history, they turned to some new, young additions to the team. This year, the varsity team featured four sophomores and, most notably, five freshmen.

“They are very versatile teammates and very fast to boot,” said senior Ben Ford, a member of the team the last two years.

The coach also recognized the impact the younger team members had on the team this season.

“We have a good blend of upperclassmen and underclassmen, so we are a young team,” Sethna said. “The freshmen have come in like the sophomores did last year– adding some depth and top-end speed to our lineup.”

Although less experienced than the upperclassmen on the team, the freshmen have made an impact in meets this year.

At the December Lake County Invite where MHS took third, freshman Omar Fathallah placed second in the 50-meter freestyle with a time of 22.16.

“For me it was a big goal to make the varsity team as a freshman because all the older kids were pumping me up about how fun varsity swimming for the high school is,” Fathallah said. “They also talked about how we could possibly make it to state this year, and I wanted to try my best to help them make it there in any way I [could].”

At the same December meet, Fathallah and freshman Aaron Anastos, along with seniors Hunter Magee and Ryan Zentz, placed second with a time of 3:30.84 in the 400-meter freestyle relay.

“We have a bunch of new freshmen making an impact. We’ve been deep in recent years and are trying to move up,” Coach Sethna said. “For the most part, [the freshmen] are guys we count on to help score points in meets and invites, and to date, they have helped make our team better in that regard.”

With help from the freshmen, the swim team was able to place second at the Conant Invite in January and showed off their speed with nearly half the team accomplishing season-best times, according to the team’s Twitter page.

“By being some of the fastest on the team, they’ve become ones to beat and to rely on,” Ford said. “Their speed and skill in the sport [have been impressive].”

The freshmen have proven their worth as the season has progressed, becoming reliable members of the team who swim with the skill of many of the upperclassmen while still being young enough to learn new skills and improve upon where they are at.