Movie-goers enjoy ‘The Upside’ with some downsides 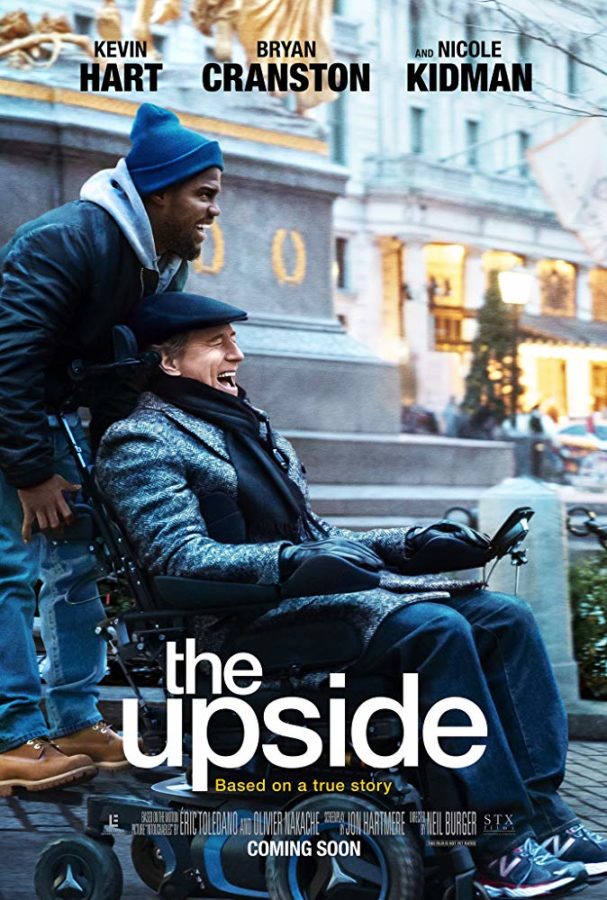 “The Upside,” starring most notably Kevin Hart and Bryan Cranston, tells a story about a wealthy man who has quadriplegia and an unemployed man who has a criminal record from the past. Dell Scott, played by Hart, is hired by Philip Lacasse, acted by Cranston, to perform all of the daily measures that he can no longer do for himself.
Throughout the PG-13 movie, Hart’s character faces many challenges, including the rigorous battle of seeing his son and ex-wife, Anthony and Latrice, acted by Jahi Di’Allo Winston and Aja Naomi King. In order to win back the love and affection of both, Hart flips his life around in order to prove how much he wants to be a part of their lives.
Although a predictable journey, the movie contained many heartfelt moments, which included car rides with the son and Cranston’s character, late dinner dates and love letters to an anonymous lover.
“It was definitely a very predictable movie, especially if you saw the trailer. Even though it was predictable in many aspects, it was still really entertaining,” Sofia Feijoo, junior, said.
Sophomore Lauren Carlson thought similarly to Feijoo in relation to the predictableness of the movie and its scenes.
“You could see that he was going to have a happy ending, but you couldn’t predict the specific obstacles in his way,” Carlson said.
Minus the predictable moments, there were many favorite scenes that the audiences fell in love with in relation to the connections between Hart’s and Cranston’s characters.
“My favorite part was when Dell took Phillip on a trip toward the end of the movie, and he was able to smile again,” Hope Peterson, sophomore, said.
There were very few smiles that came from Cranston during the movie; the only true displays of love and emotion came from the moments he spent with Hart. However, sadness swept through the movie in such ways that depressed the audience.
“I didn’t like the one scene where the main character went on a date,” Carlson said. “The woman couldn’t see past his disabilities, and the main character pushed away everyone that cared about his well-being.”
Although some scenes weren’t all that favorable, the movie as a whole was enjoyable and a delight to watch.
“I honestly wouldn’t change anything. The whole movie was both heartwarming and funny but also [had] a good message,” Feijoo said.
Through the highs and lows of life, Cranston’s character experienced it all. With recurring memories of a past wife to being fully disabled from the neck down, the messages of never giving up and to always look on the brighter side were displayed..
Said Sophomore Timothy Yavorskiy, “I laughed a lot; tears were shed, but I thought it was an amazing movie.”