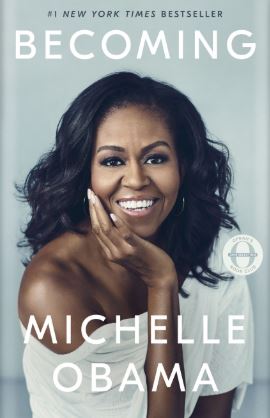 Michelle Obama is a household name.

Just look up all her lifetime successes (and, yes, there are a multitude of them).

But, better yet, read her recent book “Becoming.”

This memoir focuses on the upbringing of the previous FLOTUS (First Lady of the United States) from the South Side of Chicago to the most powerful address in the country: the White House. The book touches on overcoming the barriers and stereotypes blocking success. While it mentions dirty politics and leaders of the country, it’s mainly about Obama’s personal growth and her family.

Given everything it covers, then, “Becoming” is a book that once picked up can’t be put down.

The beginning section of the book, titled “Becoming Me,” was the most intimate of all the sections of the book as it covers Obama’s childhood. With stories about her South Side home, her friends and her family, the chapters read like fiction and include fun little anecdotes involving popsicles on a warm summer day to practicing piano.

One of the best sections of the book is “Becoming More.” This section takes the reader through Obama’s time in the White House during her husband’s presidency. The reader gets to see her point of view regarding the large house she lived in for quite some time and even how she handled meeting the Queen of England. It’s stories like this one that keep the reader turning the page, asking “what next?”

In picking up this book, one expects nothing less than a strong message because this is Michelle Obama we’re talking about, and the book meets this expectation.

There is nothing naive about the book either. It’s straightforward and yet exudes strength– in its strong vocabulary to describe events and in its intimacy. For example, the reader feels as if he or she is in the room when the Obamas get married.

Note, though, there is nothing quick about this book. Every event, every story that could’ve possibly shaped her life is included, and every event is portrayed as important.

So, don’t pick up this book because of an appreciation for politics. A reader will not find much about politics in this memoir.

Instead, one will find a story about a young girl who saw a future and dodged all the obstacles in her way to reach her end goal with a loving family. This book is about hard work and family. No more. No less. It is about changing one’s social status through persistence and defying the expectations that are meant to hold one back. It is about how a young girl raised in the thickness of the South Side became Michelle Obama.

“I couldn’t even begin to imagine him, really, the person who would become the ‘you’ to my ‘I.’ But now here we were.”
“At the end of a busy day, there is nothing better than watching a young bride-to-be saying yes to the dress.”
“I’ve been lucky enough now in my life to meet all sorts of extraordinary and accomplished people. … What I’ve learned is this: All of them have had doubters.”
“If you don’t get out there and define yourself, you’ll be quickly and inaccurately defined by others.”
“The struggles of Rosa Parks and Coretta Scott King were more familiar to me than those of Eleanor Roosevelt or Mamie Eisenhower. I carried their histories, along with those of my mother and grandmothers. None of these women could ever have imagined a life like the one I now had, but they’d trusted that their perseverance would yield something better, eventually, for someone like me. I wanted to show up in the world in a way that honored who they were.”